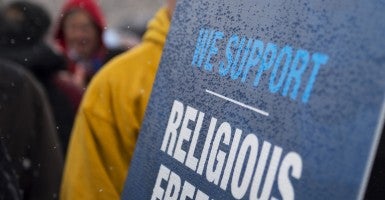 The pitch of public controversy surrounding cultural issues—especially those related to women and reproduction—can give the impression that we live in an intractably divided society with incompatible differences.But the Hobby Lobby decision suggests that such a tone is overwrought.

The Supreme Court’s opinion in Burwell v. Hobby Lobby and Conestoga Wood Specialties v. Burwell correctly discerned in the Religious Freedom Restoration Act (RFRA) a way to navigate public life together despite our deep differences. RFRA provides the kind of mechanism we need to balance contrasting beliefs and competing values in our pluralistic society.

That explains why it passed Congress nearly unanimously and was signed by President Clinton in 1993 with the support of a broad coalition that included organizations from the Southern Baptists to the ACLU.

The Court concluded that, “under the standard that RFRA prescribes, the HHS contraceptive mandate is unlawful.”

“If the owners comply with the HHS mandate, they believe they will be facilitating abortions, and if they do not comply, they will pay a very heavy price,” the majority opinion reasoned concerning the crippling fines—an estimated $1.3 million per day for one company—imposed by HHS for non-compliance. “If these consequences do not amount to a substantial burden, it is hard to see what would.”

The Hobby Lobby decision allows the Obama administration to pursue its policy objective of providing no-cost contraception through other means. Meanwhile, the evangelical Green family of Hobby Lobby and the Mennonite Hahn family of Conestoga Wood Specialties may continue to run their family businesses consistent with their faith.

One need not share the religious convictions of the Greens and Hahns concerning the sanctity of unborn human life to conclude that they should not be coerced to violate their beliefs by including potentially life-ending drugs and devices in their health plan. Nor does one need to have the moral scruples of a Catholic nun to agree that the Little Sisters of the Poor, which ministers to the elderly and is involved in one of the nonprofit challenges to the mandate, should not have to facilitate health insurance for contraception.

RFRA does not allow religious claims to automatically trump any government interest. The government could assert a compelling government interest—such as the maintenance of public health and safety—pursued through the least restrictive means, and prevail. As the Hobby Lobby opinion itself stipulates, “this decision concerns only the contraceptive mandate and should not be understood to hold that all insurance-coverage mandates, e.g., for vaccinations or blood transfusions, must necessarily fall if they conflict with an employer’s religious beliefs.”

Overlooking such precision, and characteristic of the fraught discourse that attends these cultural debates, Justice Ginsburg’s dissent attributes “startling breadth” to the Court’s opinion. In her view, it establishes that commercial enterprises “can opt out of any law (saving only tax laws) they judge incompatible with their sincerely held religious beliefs.”

As the majority opinion notes, Ginsburg’s “dissent reveals that its fundamental objection to the claims of the plaintiffs is an objection to RFRA itself.” The Washington Post put a sharper point on it, calling for Congress to roll RFRA back, undoing the work that has served our nation well for two decades.

Even if we can’t agree, the American order has given us good tools for agreeing to disagree. RFRA is one such tool, and we should prize it.

Originally posted on the Berkley Center.