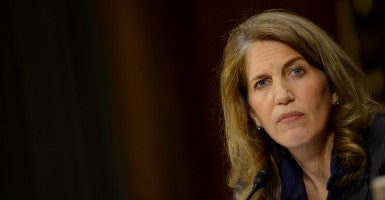 The Senate today confirmed Sylvia Mathews Burwell as secretary of the Department of Health and Human Services by a vote of 78 to 17, making her the nation’s new lead figure in implementing Obamacare.

“Sylvia is a proven manager who knows how to deliver results, and over her career she has built relationships with Democrats and Republicans alike,” President Barack Obama said.

Burwell, 48, director of the White House Office of Management and Budget, won the support of some Republicans soon after Obama nominated her. In the end, 24 Republicans and two independents joined 52 Democrats to confirm her.

She weathered opposition mounted by conservative Republicans such as Mike Lee of Utah and Ted Cruz of Texas, who wrote Burwell last month asking her to answer questions related to Obamacare, formally known as the Affordable Health Care Act.

Cruz yesterday said he would vote against Burwell’s confirmation, citing dissatisfaction with her answers.

“President Obama and Director Burwell have turned their backs on the millions of Americans suffering because of Obamacare,” Cruz said in a press release. “Until the president agrees to offer meaningful relief to the millions of people hurt by Obamacare, we should not confirm this nominee.”

Lee did not vote. Other Republicans, such as Oklahoma’s Tom Coburn and Arizona’s John McCain, supported Burwell in part because of what they called her management skills and broad experience. That experience includes budget oversight for Medicare and Medicaid.

Burwell replaces Kathleen Sebelius, who resigned April 10 following the messy initial rollout of the Affordable Care Act. The Senate confirmed Sebelius in 2009 by a vote of 65-31.

Burwell also served in the Clinton administration as staff director of the National Economic Council and later as then-Treasury Secretary Robert Rubin’s chief of staff. When she left the Clinton White House, Burwell assumed a leadership position at the Bill and Melinda Gates Foundation, and. in 2011, took over the Walmart Foundation.

The Senate unanimously confirmed Burwell to lead OMB in April 2013.

As HHS secretary, Burwell will preside over a budget exceeding $1 trillion. She will be responsible for Medicare and Medicaid, the National Institutes of Health, and the Food and Drug Administration.

A West Virginia native, she is a graduate of Harvard College and Oxford University.