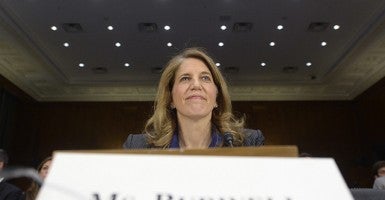 Burwell, who currently leads the Office of Management and Budget, received bipartisan praise at a Senate Finance Committee hearing, but lawmakers from both parties pressed her about problems that have come from the Affordable Care Act, known as Obamacare.

Sen. Orrin Hatch, R-Utah, wanted to know whether Burwell would go after federal funds that were sent to states such as Massachusetts, Oregon, Maryland and Nevada, which have bungled and even abandoned their online state insurance exchanges that are part of Obamacare.

I would want to learn about that. We need to understand where those taxpayer funds went and…use the full extent of the law to get the funds back.

Burwell told lawmakers she would focus on access, affordability and quality issues regarding the health law and promised to be responsive to congressional requests. “I want to work to maximize all three areas and think about ways we can do things better,” she said.

If confirmed, Burwell would take over the HHS reins from Secretary Kathleen Sebelius, who has been criticized for the disastrous rollout of Obamacare’s federal insurance exchange website, HealthCare.gov, and continued implementation problems

Sen. Pat Roberts, R-Kan., asked whether Burwell would repeal the Independent Payment Advisory Board, a controversial mechanism created by Obamacare that allows an unelected board to determine growth cuts in Medicare that would affect beneficiaries.

“IPAB as it is currently written would not affect beneficiaries,” Burwell said, adding that there are barriers in place to halt the triggering of the board.

Sen. Chuck Schumer, D-N.Y., predicted the Senate would confirm Burwell by a large majority. She was confirmed a year ago to lead the OMB by a vote of 96-0.