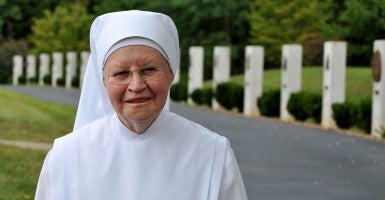 The eighth time still doesn’t seem to be the charm for government bureaucrats. On Friday, the Obama administration released yet another revision to the Department of Health and Human Services mandate that requires employers to provide coverage of abortion-inducing drugs, contraception and sterilization.

Many are wondering if the government has actually protected the religious freedom of the more than 300 plaintiffs suing over the coercive rule. The answer is no. I explain why by answering some common questions here:

Who would the revised rule apply to?

The interim final rule will only apply to certain religious non-profit organizations (like schools, charities and hospitals) who have a religious objection to facilitating insurance coverage of one or more abortion-inducing drugs and devices, contraception or sterilization services. Today, there are almost 200 religious non-profits suing over the coercive rule that comes with devastating fines for noncompliance —including Little Sisters of the Poor, Wheaton College, more than a dozen Catholic archdioceses, and health ministries.

What does the revised rule say?

If a religious non-profit organization has a religious objection to providing or facilitating coverage of abortion-inducing drugs and devices or contraception, the employer can write a letter to the Department of Health and Human Services (HHS) informing the government of such objection. The government will then direct the employer’s insurance company or third-party administrator to cover the objectionable drugs, devices, or services.

>>> Check out how just how many times the Obama administration has revised this Obamacare mandate.

No. The Obama administration’s latest bureaucratic tweak to the mandate would only replace one bad regulation with another.

Under current regulations, a religious non-profit can sign what amounts to a “permission slip”directing their insurance company or administrator to cover the objectionable drugs and devices – a scheme most organizations believe still makes them complicit in a gravely immoral act. Under today’s revision, objecting religious non-profits would instead send a letter to HHS. HHS would then direct the organizations’ health plans to include the objectionable drugs and services.

Numerous federal courts — including the Supreme Court – have seen through the current gimmick and granted temporary protection from the coercive mandate for religious non-profits in 31 cases. Just adding another step to an already broken and unacceptable process doesn’t protect religious freedom. As the Supreme Court has noted, there are plenty of other ways for the government to provide abortion-inducing drugs and contraception to those who want them without hijacking employers health plans.

What does the revision mean for religious non-profits’ lawsuits?

Individual non-profit organizations will have to determine whether today’s update – which can still be amended – adequately respects their right to work without violating their deeply held beliefs.

But even if the revision does satisfy some religious non-profits, it doesn’t even apply to all organizations with objections to the mandate. Non-profits like March for Life, which objects to covering abortion-inducing drugs and devices on moral – not religious – grounds, have been given no protection from the mandate by the Obama administration. Those organizations’ lawsuits against the coercive rule are expected to continue.

Even with the new revision, federal bureaucrats are still taking it upon themselves to award different organizations different degrees of protection for religious freedom. This multi-tiered system of doling out protection for a fundamental right is not consistent with the Constitution or federal law. Every American should be free to live and work according to their deeply held beliefs without fear of government penalty unless government can show that it is acting for a compelling reason in the least restrictive way possible.

Will women still have access to birth control under this proposed rule?

All women remain free to make their own decisions about the drugs and devices at issue in this mandate and to purchase or find insurance coverage for them. The handful of family businesses, charities, schools, and others fighting for freedom from this coercive Obamacare rule simply seek not to participate in those decisions that violate their deeply held beliefs.

Didn’t the Supreme Court already strike down the HHS mandate?

No. Earlier this summer, the Supreme Court ruled that the government could not force certain family businesses to provide coverage of abortion-inducing drugs and devices in violation of their religious beliefs. All non-grandfathered health plans must still include coverage of all FDA-approved contraceptives, abortion-inducing drugs and devices and sterilization.

That means the coercive mandate – and the onerous fines for not complying with the rule – are also still in place for non-profit organizations like schools, hospitals, charities and other employers.

The document released today is an interim final rule and as such will go into effect once it’s published in the Federal Register next week. However, the public can submit comments on these revisions to the mandate to HHS over the next few weeks.