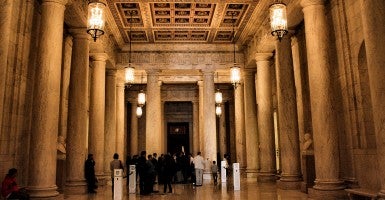 The Great Hall of the Supreme Court building, looking towards the main entrance to Court Chamber. (Photo: Phil Roeder)

This week an important religious– liberty law did what it was supposed to do. In Burwell v. Hobby Lobby, the Religious Freedom Restoration Act (RFRA) provided the Supreme Court with a mechanism for weighing competing claims in our pluralistic society. The Court determined that we can, in fact, balance seemingly conflicting interests without throwing out religious liberty.

Under Obamacare, the Department of Health and Human Services deemed it a critical public-policy goal to ensure all women have access to contraception at no cost to them. It pursued that objective by mandating that many employers provide employee heath insurance covering all 20 FDA-approved contraceptive drugs and devices, including four that have the potential to end unborn human life.

The Evangelical Green family of Hobby Lobby and the Mennonite Hahn family of Conestoga Wood Specialties could not provide coverage of these latter four without violating their religious beliefs concerning the sanctity of human life.

In a 5–4 decision, the Supreme Court rejected the Obama administration’s argument that forcing these family-owned businesses to provide coverage for potentially life-ending drugs and devices was the least restrictive means to achieve its policy goal.

Women’s access to affordable birth control was not in question in this case. Hyperbolic claims to the contrary notwithstanding, women still have access to the whole range of contraception. What was at stake was the right of Americans to run a family business consistent with their faith. The Court made clear that the administration’s policy goal could be pursued without burdening religious freedom.

The court’s ruling is certainly a victory for religious freedom. In other conflicts, the government may sometimes be able to show it has a compelling reason for burdening religious freedom (to protect public safety, for instance). But RFRA sets a very high bar for the government to meet to do so. This careful balancing test has served us well for more than 20 years since RFRA’s enactment. And it will continue to provide us a commonsense way of weighing compelling state interests with the fundamental right to religious freedom.

One of the many problems with Obamacare is its increased centralization of decision-making about what insurance plans must include, what employers must provide, and what individuals must purchase. Policy should not coerce family business owners and or individuals to violate their religious beliefs. Health-care policy should allow individuals and families to make different decisions about the coverage of controversial drugs, devices, and procedures.

The Constitution and RFRA supply effective tools for protecting religious liberty, even in a culture with deep disagreements on issues such as abortion. You don’t have to agree with the Hahn and Green families’ decision to support their freedom to make that decision. This week the Court affirmed that perspective, leading Alliance Defending Freedom attorney Matt Bowman to call Hobby Lobby an “inclusive decision” that advances everyone’s freedom.