HHS Mandate: Only the Beginning of Obamacare’s Conscience Problems 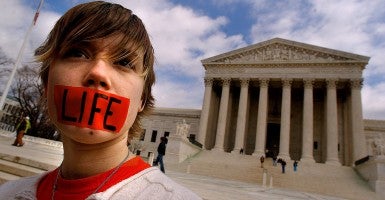 A pro-life activist in front of the U.S. Supreme Court. (Photo: Newscom)

Any day now the U.S. Supreme Court is expected to rule in the case of Hobby Lobby and Conestoga Wood Specialties—family-owned businesses that have gone to court to challenge a provision under Obamacare that requires them and nearly all other employers to cover abortion-inducing drugs, contraception and sterilization, regardless of their religious beliefs.

As these families await the decision on whether they will be able to run their company health plans consistent with the pro-life convictions of their Christian faith, it’s important to put their concerns in the context of the wider conscience problems that loom under Obamacare.

The suits, brought by the Green family, evangelicals who own Hobby Lobby, and the Hahn family, Mennonites who run Conestoga Wood, are among 49 filed by family-owned businesses challenging the Obamacare HHS mandate.. The Obama administration has been unwilling to compromise. But the courts are not rushing to that same judgment: In 35 of these lawsuits so far, courts have granted injunctions—not allowing the government to enforce the mandate against these family businesses—while their cases proceed.

Meanwhile, 51 lawsuits have been joined by hundreds of non-profit religious organizations seeking to preserve their religious independence to set internal policy consistent with their faith. These include Christian colleges such as Wheaton, Colorado Christian and Belmont Abbey. They include ministries such as the Little Sisters of the Poor, who provide care to elderly, and the Bible-publisher Tyndale. In these cases, judges have granted 22 injunctions to date and denied requests for relief in just four cases (two of which came just last week from the 6th Circuit Court of Appeals). As these non-profit challenges are appealed, one or more may reach the U.S. Supreme Court as early as next term.

All told, 300 plaintiffs are involved in 100 challenges to the anti-conscience mandate. But it is important to remember that all this commotion is the result of one small aspect of one set of regulations concerning preventive care under Obamacare. And that means we’ve only just begun to see the potential conscience problems that could come from this massive overhaul of our health care system.

From beginning of life to end of life, health care involves innumerable moral considerations. As we continue to deliberate what is and is not ethically permissible in a civilized society, Americans remain deeply divided on issues such as abortion, in vitro fertilization and sensitive issues concerning care at the end of life, to name just a few. Meanwhile, medical advances continually bring about promising new developments and challenging new ethical questions.

Handing the moral compass to remote bureaucrats to navigate this territory is a bad idea. The centralization of more decision-making about the benefits that health plans must provide means that such determinations are more likely to be made without respect for Americans’ differing beliefs on these issues. The HHS mandate is Exhibit A—but it won’t be the last such example. Already Obamacare requirements are entangling more taxpayer dollars in funding abortion, in complicated ways that lack transparency and may leave citizens without a choice in the matter.

Obamacare has given the federal government the power to determine what insurers must cover, what employers must include in their health plans, and what individual Americans must buy. There is no way out, and that is bad news for conscience.