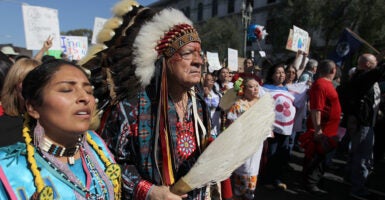 San Francisco's school system has decided the word "chief" is racist, and therefore no longer may be used in job titles. Pictured: Chief Phil Lane of the Yankton Dakota and Chickasaw First Nations marches with demonstrators to City Hall during a rally against climate change Feb. 17, 2013, in Los Angeles. (Photo: David McNew/Getty Images)

Not content to strip schools of “offensive names” or revel in its feces-filled sidewalks, San Francisco has yet again proven why it’s one of the most insane cities in America by engaging in some pointless language policing.

The San Francisco Unified School District announced last Wednesday that it would no longer use the word “chief” in any  job titles, over possible concerns from Native Americans.

“While there are many opinions on the matter, our leadership team agreed that, given that Native American members of our community have expressed concerns over the use of the title, we are no longer going to use it,” a district spokesman said in a written statement Tuesday to The Daily Signal about the prohibition of “chief.”

So that’s it. All it takes in San Francisco to strike an entire word from common usage is for a few special groups to complain.

To these insane leftists, American Indians are the sole owners of the word chief, ignoring the fact it’s that not an Indigenous word to begin with.

Contrary to the historically inaccurate view of the radical left, the word comes from the French; people used “chief” long before it became a title for American Indian tribal leaders.

But for the left, that history is irrelevant. The word has been connected to a protected group. That means it gets final control over who, when, and how it’s used.

Chief is not the first innocuous word to receive an etymological beatdown lately. Leftists have also tried to connect the word “spook” to a racial slur for black people and to link the word “marijuana” to anti-Mexican sentiment.

This sort of thing isn’t even limited to words anymore.

Dreadlocks have become another restricted item for any person who isn’t black. The left claims that because black people may wear dreadlocks, it’s now explicitly and exclusively a black hairstyle.

The internet is full of videos where aggrieved leftists aggressively shame or attack white people over a hairstyle the Greeks wore since the time of Plato.

Does anyone use words like spook or marijuana to be racist? Does anyone wear dreadlocks to mock black people? Of course not.

But to the mind of a radical leftist, already primed to see offense where none exists, these words are threats to their in-groups, and must be destroyed.

Although the average American is likely to roll his eyes at this and chalk it up to those crazy Californians doing their own thing, this sense of linguistic entitlement comes with social and political consequences.

Who decides what is or isn’t appropriate word usage? That’s an essential question when livelihoods are on the line.

It seems like every day someone is fired from his job for using a word the radical left didn’t approve of, or phrasing something in a way that’s, like, so five minutes ago.

Combined with the radical left’s endlessly schizophrenic tendency to change what terms are acceptable, it’s created a near monopoly on public discourse.

Indeed, leftist activist Saul Alinsky wrote in his 1971 book “Rules for Radicals” that “he who controls the language controls the masses.”

Truer words have never been spoken. The radical left’s death grip on acceptable speech is going to be a problem for any group that wants to take it on.

How can you effectively fight against a power that can control how the debate is framed?

The actions taken by San Francisco’s Unified School District are obviously ridiculous. But they’re a symptom of an ongoing and disturbing trend.

If those on the left think they can get away with eliminating a completely innocent word like chief, they won’t hesitate to wield that power on more controversial and consequential speech.

The cultural dominance of the radical left exacerbates many problems. Language policing is chief among them.