Uncle Sam Is Picking Your Pocket With High Taxes. Democrats Want to Raise Them Even Higher. 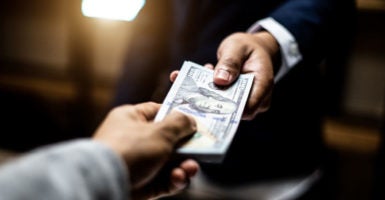 Some politicians running for federal office make it sound as if the biggest problem facing our country is that we don’t send enough of our paychecks to Washington, D.C.

Before they start trying to spend more and more of our money, they would do well to consider just how much they’re already spending. Looking back over the last decade, it’s clear they’ve already entered the “drunken sailor” stage.

The Office of Management and Budget reports that federal revenues totaled $29.3 trillion during that period. The Census Bureau estimates there are currently 128 million households in the country. Thus, each household’s share of the tax burden comes out to around $228,000.

And this number is conservative, as in low. Adjusting for inflation and the smaller number of households at the start of the decade would cause the estimate to go even higher.

The federal government collected an average of $27,000 in revenue per household in 2019.

According to the latest data from the Congressional Budget Office, federal revenue hit an all-time high of $3.46 trillion in 2019, or roughly $27,000 per household. The vast majority of the haul comes from individual income and payroll taxes. That’s money directly out of your pocket.

The federal bill is hefty enough. When we consider state and local taxes, the full burden of government grows larger. The Tax Foundation estimates that workers need January, February, March, and half of April just to cover their full tax bill.

Federal revenue in 2019 matched the combined economic output of 13 states. It is difficult to comprehend the total amount.

The fruits of that much labor ought to be more than enough to satisfy our politicians.

We can think of government debt as deferred taxes. Washington placed an absolutely staggering $11.3 trillion on the national credit card over the decade.

That averages out to $88,000 in new federal debt per household.

Some would argue that the debt justifies a significant increase in taxes. This is the wrong prescription. Federal spending has grown far too fast, and is projected to increase even faster as more of the baby boomer generation receives benefits from Social Security and Medicare.

Real alternatives exist. By eliminating wasteful programs and reforming others, we could reduce federal spending and the national debt while protecting families from tax hikes.

A massive expansion of the federal government would require big tax hikes on the middle class.

Some politicians would have you believe it is possible to fund grandiose plans such as “Medicare for All” and a Green New Deal while only raising taxes on the rich. It’s not.

Even if Washington confiscated every dollar of corporate income and every penny of income from those earning above $200,000 per year, it wouldn’t come close to paying for the full progressive agenda.

American families would be better off keeping more of their hard-earned money in the decade to come. Washington is already taking plenty.