Even in San Francisco, Voters Fed Up With Woke Incompetence 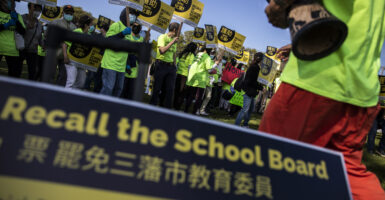 San Francisco residents voted to recall three members of the city’s school board on Tuesday—School Board President Gabriela López, Vice President Faauuga Moliga, and Commissioner Alison Collins. The recall effort began in January 2021 after the school board voted to rename 44 schools in the area that honored various American historical figures, such as Abraham Lincoln and George Washington.

Leaders of the recall effort criticized the school board’s focus on renaming schools while the schools remained shut down.

“The city of San Francisco has risen up and said this is not acceptable to put our kids last,” said Siva Raj, a parent and one of the leaders of the recall effort, according to Fox News. “Talk is not going to educate our children, it’s action. It’s not about symbolic action, it’s not about changing the name on a school, it is about helping kids inside the school building read and learn math.”

More than 70% of voters supported the recall of the three board members, according to The New York Times. While Democrat politicians in San Francisco were divided on the recall, it seems even in left-wing San Francisco the people are getting tired of woke incompetence. The Daily Signal published the following article on the San Francisco School Board on Feb. 10, 2021.

Does the truth matter? Not if you’re the woke president of the San Francisco School Board, apparently.

A revealing interview by The New Yorker with the San Francisco School Board president, 30-year-old Gabriela López, gave some insight into the mindset of a public school board that just decided that 44 of its schools needed to be renamed because of their “racist” ties.

The Google Doc where the San Francisco school board did it’s research for deciding which historical figures to cancel is public, and it’s hilariously bad https://t.co/Pc1R7Vv6Rg— Alex Griswold (@HashtagGriswold) January 29, 2021

She pointed to a ridiculous claim that Lincoln was somehow particularly guilty of killing “Indigenous people.” When pressed about what she personally thought about Lincoln, she said:

But according to the San Francisco School Board, Lincoln didn’t do enough for black lives. His accomplishments just aren’t good enough to earn praise from board members, whose heroic accomplishments include drawing up purge lists and making sure teachers and students can’t get into classrooms.