History Comes to Call: The 1619 Project Cannot Deny Its Own Past 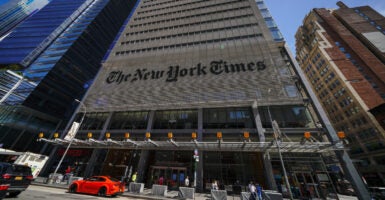 The editors of the 1619 Project have consistently rejected corrections to fix the project’s many factual errors. However, it now seems like some statements, including the thesis that America’s true founding was 1619, have been removed. (Photo: John Nacion/SOPA Images/LightRocket/Getty Images)

History is a harsh mistress when trifled with. Newspaper writers and editors make a profession of turning the present into history, and they acknowledge the dignity of facts with every correction appended to the bottom of their stories.

Yet over the last year, the editors of The New York Times’ and Pulitzer Center’s 1619 Project rejected corrections—save a modest one after receiving criticism from several quarters—to fix factual inaccuracies in this project. Now history has come to call.

The project, a series of essays and other written work released in August 2019, state that the material is meant to “reframe” American history and put the “consequences of slavery and the contributions of black Americans at the very center of our national narrative.”

Even critics of the project acknowledge the subject’s importance: Robert Woodson wrote shortly after its release that “slavery and discrimination undeniably are a tragic part of our nation’s history”; Princeton professor Sean Wilentz says the “opportunity seized by the 1619 Project is as urgent as it is enormous.”

Other observers have now cited changes the Times made to the text that went unannounced, as well as the editors’ ongoing refusal to make additional corrections, both of which betray the integrity of such an ambitious undertaking.

As its thesis, the project’s editors originally wrote that they understand 1619 to be “our true founding” because it was the year slaves arrived in the Virginia colony.

Writing in Quillette, Phillip Magness, senior research fellow at the American Institute for Economic Research, pointed out that the Times appears to have “decided to send it down the memory hole” and “quietly edited out” this statement amid mounting critiques.

Considering the attention the Times has received for the project, including calls for corrections to be made, such a revision should not go unnoticed.

Lionsgate and Oprah Winfrey have agreed to create film adaptations. The project’s lead editor says multiple books will be based on the material. The Pulitzer Center adapted the project for use in K-12 schools, and teachers in some 4,500 classrooms are using it. It’s not clear how any changes made to the project will find their way into schools teaching this content.

Furthermore, at least a dozen writers and historians, including Magness and award-winning scholars from Brown University and Princeton, have cited factual inaccuracies in high-profile outlets, including a letter to the Times’ editors and articles in The Atlantic, Politico Magazine, the The Wall Street Journal, and elsewhere.

As explained in The Daily Signal in March, in the wake of these rebuttals, the editors of the project announced at that time that they modified the claim that American colonists fought England to preserve slavery. Editors at the Times only slightly adjusted the original statement, hedging to say “some” fought to preserve slavery. But at least they announced this correction.

Left unanswered today are other needed corrections to more than one of the project’s essays. For example, the Constitution did not protect slavery, but rather was designed to make it possible for the emancipation of slaves, and at least one significant pro-slavery writer in the 18th century said slavery was necessary for socialism, not capitalism, another point raised by Magness and Princeton’s Allen Guelzo.

Muddling the project’s aims even more, lead editor Nikole Hannah-Jones said on social media and in interviews that the 1619 Project should not be considered history, then, later—sometimes within the same interview—that it is history.

Now, many of the tweets regarding whether the nature of the 1619 Project is history are gone. Gone, too, said Magness in Quillette, is at least one tweet on the claim that 1619 should replace 1776 as the date of our nation’s founding.

President Donald Trump announced last week that he would create a commission to promote patriotic education. We should be wary of federal involvement with local schools for fear of displacing parents as the central decision-makers in their children’s education. The Obama administration created a case study on federal manipulation of local schools with its Common Core national standards.

The president’s commission can draw attention to the facts of American history and avoid coercive recommendations such as making federal K-12 spending for a school contingent on the adoption or rejection of certain curriculum.

Meanwhile, with each passing day, the 1619 Project undermines its own efforts to teach anything but that history takes no prisoners.