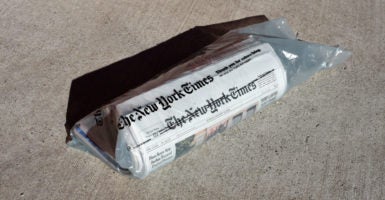 The 1619 Project was based on the idea that slavery was “one primary reason the colonists fought the American Revolution,” but the Times is now hedging on that assertion. Pictured: A copy of The New York Times on a driveway in Santa Fe, New Mexico. (Photo: Robert Alexander/Getty Images)

“I have been thinking about this and reading obsessively for 25 years about all the inequalities in American life that can be traced back to slavery,” Nikole Hannah-Jones of the New York Times told an audience at Harvard in December.

Now the Times admits: Her obsession bested her reason.

On March 11, the Times issued a correction to its 1619 Project, a sprawling journalistic exercise that has proved more editorial than historical.

And this wasn’t just any correction. The 1619 Project was based on the idea that slavery was “one primary reason the colonists fought the American Revolution,” but the Times is now hedging on that assertion.

In the paper’s correction, editors changed the wording of Hannah-Jones’ leading article in the series to say that “some of” the colonists fought the American Revolution to defend slavery.

The editors called this a “small” clarification, and it was indeed very small, although considering that the 1619 Project’s full-throated commitment to demonstrating that American history can only be explained through the lens of slavery, this correction appears nothing short of essential.

But the correction did not go far enough.

Writing in National Review, Timothy Sandefur explained, “The New York Times’ ‘1619 Project’ purports to ‘reframe’ American history by positing not only that the United States was founded ‘as a slavocracy,’ but that ‘nearly everything that has truly made America exceptional’ is the result of ‘slavery—and the anti-black racism it required.’”

The 1619 Project wanted no confusion: American history began with slavery.

Yet historians from both sides of the ideological divide and even one of the Times’ own fact-checkers cited problems with the Project. On March 6, Leslie M. Harris, a history professor at Northwestern University, wrote in Politico that she had “vigorously argued against” Hannah-Jones’ contention that “patriots fought the American Revolution in large part to preserve slavery in North America.”

“Despite my advice, the Times published the incorrect statement about the American Revolution anyway,” Harris wrote, even as she maintained her support for the project as a whole.

Sandefur and Harris aren’t alone in their critiques. The Wall Street Journal cited criticism from Pulitzer-winning historians Gordon Wood and James McPherson, with Wood saying, “It still strikes me as amazing why the New York Times would put its authority behind a project that has such weak scholarly support.”

Unfortunately, the Times’ correction may be too little, too late for thousands of students.

The 1619 Project’s creators accompanied their essays with sets of curricular materials designed for K-12 schools, and now some of the nation’s largest school districts are using these essays and instructional products.

Chicago Public Schools CEO Janice K. Jackson said the 1619 Project materials are “invaluable tools for our classrooms” in her announcement that the district would be using the materials.

Schools in Buffalo, New York, have “[infused] 1619 Project resources into the mainstream English and Social Studies curriculum.” According to Real Clear Investigations, five schools systems, including Washington, D.C.’s, are using the materials across their districts.

Scholars warned that schools should not use this material for historical instruction. Phil Magness of the American Institute for Economic Research told the libertarian Reason magazine that using the 1619 Project curricula in school “is at best premature” until corrections are made to some of the Project’s central ideas on the “economics of slavery.”

Concerned parents and educators should alert school district leaders about the correction and emphasize that many scholars have already said the curriculum is not appropriate for students.

Now that schools around the country are either closing, or considering doing so, due to the coronavirus, parents have an opportunity to talk with their children about the 1619 Project’s claims and to find alternatives.

Those looking for other materials have options, including the 1776 initiative, which was founded by leading black professors, journalists, and intellectuals, including Robert Woodson Sr., founder and president of the Woodson Center, and Columbia professor John H. McWhorter.

This rebuttal to the Times’ essays says that America is not “forever defined by its past failures” and offers “alternative perspectives” celebrating the “progress American has made on delivering its promise of equality and opportunity.”

The Times ushered the 1619 Project into classrooms, ignoring warnings that the material contained inaccuracies. In a strange twist of fate, a brief respite from classrooms due to the coronavirus allows families to intervene.

Let’s hope this and any future corrections receive as much attention as the original Project itself.