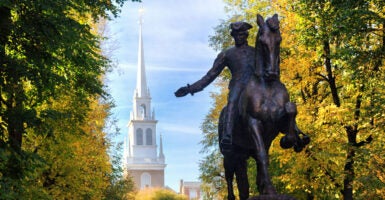 George Washington, Abraham Lincoln, and Paul Revere are among the many historical figures being scrubbed from recognition in the San Francisco education system. Pictured: A statue of Revere in Boston. (Photo: DArthurBrown/Getty Images)

Last month, the San Francisco School Board voted 6-1 to remove the names of George Washington, Abraham Lincoln, Paul Revere, and other historic American patriots from 44 schools.

Beyond the names on buildings, what’s happening inside classrooms is also distressing. School systems are being urged to stop teaching about the founding of our country. Curriculums are being discarded as far-left activists seek to cancel and corrupt American history under the guise of teaching a more honest account of our history.

I have no problem discussing the challenges we as a nation faced in our past, but we’ve seen woke extremists stoop to new lows to put down our own country and those who founded it, regardless of their stated beliefs at the time on moral issues like slavery.

For example, some extremists launched a nonsensical movement to “Cancel Hamilton.” Alexander Hamilton was a staunch abolitionist who never owned a slave, and even said “no man has a right to rule over his fellow creatures.”

Enough is enough. I want my children and children in communities across the country to grow up knowing the history of this great nation. I want the next generation of Americans to love our country, not hate it.

Our Founders, though men and not angels, did something exceptional. They fought for freedom from tyranny and established a unique set of principles that we still build upon today in order to further perfect our union.

This is the story I want our children to learn about. This republic is the land I want them to grow up in. A nation that is blessed by God. A nation that embodies the ideals of life, liberty, and happiness; equal opportunity under the law; and that every man and woman—regardless of the color of their skin or where they are born—are endowed by our creator with equal rights that no man or government may take away.

The 1776 Commission brought together scholars and historians to study and understand the principles of the founding, including the fundamental truths of human liberty, equal treatment under the law, and a government by and for the people, and how they shaped America.

On his first day in office, President Joe Biden canceled the commission, just as his allies on the far left would like to cancel the history of American exceptionalism. The history of men who banded together to shrug off the tyranny of a king and establish, for the first time, a government of laws, not men. A government that led to the end of slavery, voting rights for every citizen, and equal rights for women and men regardless of the color of their skin.

As Americans, we should be taught to understand who we are as Americans. Not forced to forget it or cover it up. That’s why I recently introduced the Preserve American History Act, which codifies former President Donald Trump’s 1776 Commission into law. Preserving the principles that the United States was founded upon has to be at the core of our education system.

Our children should read, learn about, and debate the founding documents that our forefathers wrote. They must understand why 55 men spent a summer toiling away in Philadelphia to form our nation’s Founding documents. Men like James Madison, Thomas Jefferson, Benjamin Franklin, Hamilton, and Washington are worth remembering. We must never allow them to be canceled.