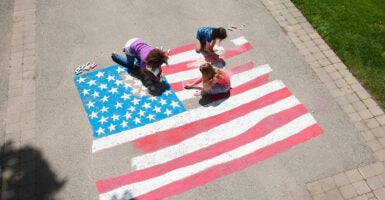 One of President Joe Biden’s first executive actions was to disband the 18-member commission, which was assembled by former President Donald Trump at the end of last year. The commission was created to further an understanding of American history and patriotism in classrooms across the country.

“The 1776 Commission was doing great work to help teach our kids about America’s exceptional founding principles,” Budd, R-N.C., said in a tweet Monday. “The Biden White House disbanded it. I’m fighting to bring it back so we can preserve American history.”

“Preserving the principles that the United States was founded upon has to be at the core of our education system,” Budd said in a statement Monday. He added that the legislation, if passed, will codify the “commission into law and preserve American history.”

The North Carolina congressman will formally introduce the bill in the House this week or early next week, Curtis Kalin, Budd’s communications director, told The Daily Signal in an email.

“The 1776 Commission was pushing back against an insidious movement to undermine our country’s exceptional founding and fundamentally transform our country by tearing down and rewriting our history,” Budd said. “During these tumultuous times, we need more people leaning on America’s founding principles, not less.”

Two days before Biden’s inauguration, the 1776 Commission, which is chaired by Hillsdale College President Larry Arnn, released “The 1776 Report.” The report seeks to create consensus on the facts of America’s founding.

During a “Daily Signal Podcast” interview, Mike Gonzalez, a member of the 1776 Commission and a senior fellow at The Heritage Foundation, explained that the report was, and is, central to the commission’s work because America cannot move forward as a united country until we understand our history.

We were just trying to give a forthright nonpartisan view of history—what happened, describe the ideals that pushed men such as Jefferson and Madison and Washington to create the constitutional republic that we now call home, talk about the compromises they had to make, the horrible compromises they had to make, slavery being the most important one.

But also explaining, as Abraham Lincoln said in the third debate with Stephen Douglas, that neither the Founders nor any of the people of the United States in the 1770s or in [the] 1780s believed that slavery would still be around in the mid-19th century.

By including the phrase “all men are created equal” in the Declaration of Independence, the Founders “laid the groundwork for the abolition of slavery in the very language of the documents,” Carol Swain, a retired political science professor, author, and the vice chairwoman of the commission, told The Daily Signal in a recent interview.

After Biden formally disbanded the commission, Swain and Arnn issued a joint statement promising the work of the commission would continue. “The Commission may be abolished, but these principles cannot be,” they said. “We will all continue to work together to teach and to defend them.”

Budd’s effort to codify the commission into law comes as some historians dispute the claims of The New York Times’ 1619 Project, a publication that Gonzalez says uses history to further a political agenda.

Budd expects the bill to receive widespread support from members of the House Freedom Caucus and the Republican Study Committee, Kalin told The Daily Signal.