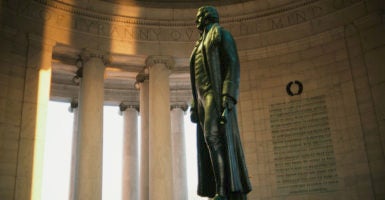 Rudulph Evans' statue of Thomas Jefferson, with excerpts of the Declaration of Independence behind it, stands at the Jefferson Memorial in Washington. (Photo: Barbara Alper/Getty Images)

Undoubtedly, most Americans would say our long-term commitment to self-government and the rule of law, and our extraordinary embrace of liberty.

Not so, according to The New York Times’ 1619 Project—named for the year in which African slaves were first brought to the English colonies in North America. The various New York Times authors apparently believe America’s unique quality is slavery.

The 1619 Project defines itself as an effort to “reframe” America’s history to define the nation’s “true founding” as one rooted—at its heart—in slavery rather than liberty.

America, according to this narrative, has been and always will be exceptionally and perhaps irredeemably racist.

As I wrote in my book, “The War on History: The Conspiracy to Rewrite America’s Past,” this is a deeply misleading description of our history, but one that is becoming all too common in both popular culture and in American classrooms.

Yes, there was slavery and racism in our country’s history, and certainly the American people and our leaders have not always done the right thing. That’s something we should acknowledge and learn from, today and in the future.

And yet, America is still worth celebrating and taking pride in.

You don’t just have to take my word for it.

Historians from across the political spectrum have come out against the 1619 Project as bad history wrapped in a destructive ideology.

Allen Guelzo, a renowned historian and professor at Gettysburg College, called the 1619 Project a “conspiracy theory” based in part on the drive to “tarnish capitalism.”

In a recent appearance at The Heritage Foundation’s annual President’s Club meeting, Guelzo explained that the 1619 Project aims at rewriting the narrative of American slavery:

Not as an unwilling inheritance of British colonialism, but as the love object of American capitalism from its very origins. Not as a blemish, which the Founders grudgingly tolerated with the understanding that it must soon evaporate, but as the prize the Constitution went out of its way to secure and protect. Not as a regrettable chapter in the distant American past, but the living, breathing pattern upon which all American social life is based, world without end.

Guelzo is hardly alone in his criticism.

Two of the most prominent critics are Gordon Wood, a famed historian of the American Revolution, and James McPherson, a highly respected Civil War historian.

Both criticized the 1619 Project in recent interviews.

Wood said he was surprised that a major project from The New York Times could be “so wrong in so many ways.”

The interviewer noted that the authors of the 1619 Project seemed to be taking up the ethos of pro-slavery radicals who also denounced the Declaration of Independence as little more than fraudulent hypocrisy.

That points up the problem with the whole project. It’s too bad that it’s going out into the schools with the authority of The New York Times behind it. That’s sad because it will color the views of all these youngsters who will receive the message of the 1619 Project.

McPherson was equally skeptical, saying that the project “left most of the history out” and he was “unhappy with the idea that people who did not have a good knowledge of the subject would be influenced by this and would then have a biased or narrow view.”

What’s particularly interesting about this criticism of the 1619 Project is both the prominence of the critics as well as the origin of the interviews.

Both were posted on the World Socialist Web Site, which is published by the International Committee of the Fourth International, a Trotskyite socialist organization.

They haven’t just published these interviews, but also offered their own blistering critiques.

A recent article on the World Socialist Web Site called the 1619 Project “a racialist falsification of American and world history,” adding:

Despite the pretense of establishing the United States’ ‘true’ foundation, the 1619 Project is a politically motivated falsification of history. Its aim is to create a historical narrative that legitimizes the effort of the Democratic Party to construct an electoral coalition based on the prioritizing of personal ‘identities’—i.e., gender, sexual preference, ethnicity, and, above all, race.

The Trotskyites appear to be unhappy that traditional Marxist ideas about class conflict have been replaced by racial and identity conflict; they are even more unhappy that this ethos has been melded into Democratic Party politics with what they see as little more than the nihilistic ends of categorizing Americans into immutable and hostile racial groups.

Despite the sudden attack from a wing of socialism, it would be a mistake to think that the 1619 Project and identity politics as a whole are not being used for traditionally socialist ends.

As I observed at a major socialist conference in July, mainstream socialists have merged identity politics with traditional socialist ideas in spite of this leading to philosophical contradictions.

Undoubtedly, one can see the socialist influence in the 1619 Project itself, which published one essay specifically linking capitalism and slavery as inherently intertwined.

And that’s certainly not all.

One of the more bizarre and wildly inaccurate claims from the project’s headline essay is that the American Revolution was fueled by the colonists’ desire to preserve slavery.

This peculiar theory has been linked to historian Gerald Thorne, a pro-Soviet apologist who once wrote a letter to the editor in The Chronicle of Higher Education that was headlined “Stalin Was No Worse Than the Founding Fathers.”

So, should Americans now embrace the Trotskyites to counter the Stalinists?

Elliot Kaufman, writing in The Wall Street Journal, explained that the Trotskyites have some extreme ideas as well—their positive spin on the Russian Revolution, for instance—but these ideas are less likely to be “turned into lesson plans for schoolteachers.”

And the message that The New York Times is spreading across the country is that America is not only unexceptional, but exceptionally bad. This is deeply misguided.

America is exceptional not because it was simply perfect at creation; it’s exceptional because generations of imperfect human beings created and cultivated a nation that has brought genuine human flourishing to millions.

Despite those who say otherwise, the United States continues to be a shining city upon a hill, especially for those who see the world at its darkest and long for the pursuit of happiness that we take for granted.

Today, as new and potent threats to liberty emerge in our world, it is essential that Americans come to understand and deepen their appreciation of our history, reject the noxious identity politics that threatens to shatter the concept of e pluribus unum, and embrace an inclusive Americanism that can unite this country in the face of its challenges.

The war on American history—escalated by the deeply flawed 1619 Project—is a lost cause and provides little but dead ends.