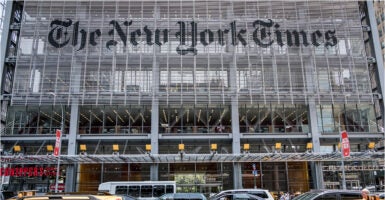 Left-wingers, including some at The New York Times, seek to discredit the President’s Advisory 1776 Commission report, which aims to rebut the narrative that America is a "systemically racist" nation. (Photo: Avalon/Universal Images Group/Getty Images)

The political left is criticizing the President’s Advisory 1776 Commission report, which aims to bring clarity about the facts of America’s founding.

The report—released Monday on Martin Luther King Jr. Day—aims to create “consensus on what [the] historical facts” of America’s founding are, said Mike Gonzalez, a member of the 1776 Commission and a senior fellow at The Heritage Foundation, in a phone interview Tuesday with The Daily Signal.

President Donald Trump named Gonzalez and 17 others to the 1776 Commission in December. The group was tasked with creating a report that would “better enable a rising generation to understand the history and principles of the founding of the United States in 1776,” according to the White House press release announcing the commission.

“The 1776 Report” uses historical facts and key principles found in the Declaration of Independence and U.S. Constitution to refute the progressive claims argued in The New York Times’ controversial 1619 Project and other left-wing curriculums.

“The core assertion of the Declaration, and the basis of the Founders’ political thought, is that ‘all men are created equal,’ the report states. “From the principle of equality, the requirement for consent naturally follows: If all men are equal, then none may by right rule another without his consent.”

The 18 commissioners address slavery directly in the new report, arguing that the Founders intentionally inserted the truth that “all men are created equal” into the declaration in order to provide a means for slavery to one day be abolished.

Many on the political left quickly discounted “The 1776 Report,” contending that it makes false assertions about the Founding Fathers and the nation’s past.

Ibram X. Kendi, author of the book “How to Be an Antiracist,” criticized the report in a thread of tweets Monday, writing, “This report makes it seem as if slaveholding founding fathers were abolitionists; that Americans were the early beacon of the global abolitionist movement; that the demise of slavery in the United States was inevitable … .”

“Kendi’s statement misses the key points that the Founders were deeply troubled by slavery even while participating in the ‘peculiar institution,’” Carol Swain, a retired political science professor, author, and the vice chairwoman of the commission, told The Daily Signal in an email Tuesday.

Swain, who is black, added that the men who signed the “Declaration of Independence and [the] U.S. Constitution … laid the groundwork for the abolition of slavery in the very language of the documents.”

CNN was also quick to criticize the work of the 1776 Commission.

Gonzalez called the CNN article “an embarrassment to journalism,” noting that the headline falsely calls the report “racist,” but then did “not even bother to back that up” with any evidence.

The New York Times also assailed Monday’s report, writing that the 18-member commission “includes no professional historians, but a number of conservative activists, politicians, and intellectuals.”

The New York Times failed to recognize at least three historians who sit on the commission, including Larry Arnn, the president of Hillsdale College and the author of several historical books, including “The Founders’ Key: The Divine and Natural Connection Between the Declaration and the Constitution, and What We Risk by Losing It”; Victor Davis Hanson, a senior fellow at the Hoover Institute and the author of a number of historical books, including “The Second World Wars: How the First Global Conflict Was Fought and Won”; and Charles Kesler, a senior fellow at the Claremont Institute, editor of the Claremont Review of Books, and the editor of “Saving the Revolution: The Federalist Papers and the American Founding.”

The attacks on America’s history are deeply troubling because the “left does not believe in absolute truth or transcendent truth,” Gonzalez said, adding that many on the left think that history can be changed and used as a tool “to gain power, erase what has happened, and … change the future.”

The left is seeking ultimately to change the future of America by changing our understanding of the past, Gonzalez said.

Gonzalez and Swain told The Daily Signal they are proud to have played a role in the creation of “The 1776 Report.“

“It was an honor to participate in the creation of a report that documents key elements of our shared history and offers Americans a road map for digging deeper into original documents and the events that have shaped our shared history,” Swain said.

She added that while America is an imperfect nation, “we have made tremendous progress in becoming a fairer and more inclusive society, despite the fact some would like to take us backwards when it comes to race relations.”