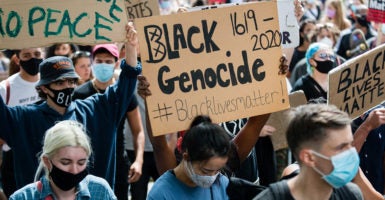 Even when 1619 Project Editor Nikole Hannah-Jones gets the facts correct, she quickly spins away from conclusions that would lift people out of poverty. Pictured: Protesters hold placards during a July 5 Black Lives Matter protest in London following the death of George Floyd who died in police custody in Minneapolis, Minnesota. (Photo: Maciek Musialek/NurPhoto/Getty Images)

Controversy makes news and newspapers sell news—or sometimes just controversy. With racial tensions already running high, a recent essay in The New York Times Magazine further stoked the fires of division by proclaiming racial protests to be a “defining tradition of this country” and insisting that reparations are necessary to achieve equality.

This is the latest installment of a set of commentaries that distort the story of America’s founding. It began last year with the 1619 Project, a series of articles arguing that U.S. history began, not in 1776, but in 1619, when slaves were brought to North America.

The 1619 Project has since led to development of a supportive school curriculum from the Pulitzer Center, to statutes toppled in recent riots, to the new call for reparations. Clearly, it is blazing a trail that leads not to unity and opportunity but to historical inaccuracies and a struggle for power.

The intersection between the project, the latest essay, and K-12 schools and colleges comes at an opportune time. Students are home with their parents now, many unsure of whether they will go back in the fall. This provides parents with a chance to set the record straight.

They might begin by discussing current events with their children—why, for instance, a mob in Portland, Oregon, destroyed a statue of George Washington and spray-painted “1619” on its side. It was a clear nod to the Times’ project.

Parents interested in learning more about the project and this most recent essay from project editor Nikole Hannah-Jones will find that these writings steer far afield from the ideas that have led America on a near 250-year journey to a degree of prosperity and quality of life undreamt of by the nation’s Founders.

Perfect outcomes for all? No. An expectation that we should settle for nothing less than opportunity for all? Yes.

Even when Hannah-Jones gets the facts correct, she quickly spins away from conclusions that would lift people out of poverty. For example, she notes that “Brown v. Board of Education did not end segregated and unequal schools; it just ended segregation in the law,” and, more arguably, that “black children remain as segregated from white kids as they were in the early 1970s.”

She concludes that the problem with making school segregation illegal was that it did not “repay black families for the theft of their educations.” She entirely misses the policy that has caused inequalities to persist, namely that students are assigned to traditional schools according to where they live.

Taxpayers have spent trillions on K-12 schools since Lyndon Johnson launched his Great Society anti-poverty programs in 1965, and the largest portion of federal education spending is for children in low-income areas.

However, the achievement gap between these students and their wealthier peers remains the same today as it was 50 years ago, all of which should give us pause when told that more spending is a viable answer.

Policy solutions just as radical but more efficacious than reparations are available. Eliminating residential school assignment is one of them. State officials could follow Arizona’s example, where parents can choose any public school for their child, anywhere in the state, subject to space.

Then there are charter schools. They have long served majority-minority populations and lower-income students, often out-performing traditional schools in urban areas. These public schools of choice are still not available in every state.

Likewise, half of all states offer students some form of private school scholarship or education savings account, but these programs serve relatively few children compared to traditional schools because of limited eligibility provisions. Teacher unions have demanded these limitations—ostensibly to protect assigned schools, the very schools that, as Hannah-Jones reminds us, remain effectively, if not legally, segregated in some areas.

A narrow focus on government spending—how much and to whom—dismisses solutions that create possibilities for future generations. Hannah-Jones writes that “none of the actions we are told black people must take if they want to ‘lift themselves’ out of poverty and gain financial stability—not marrying, not getting educated, not saving more, not owning a home—can mitigate 400 years of racial plundering.”

Yet research from Wendy Wang at the Institute for Family Studies and Brad Wilcox from the University of Virginia finds that 84% of millennial African Americans who finished high school, found a job, and married before having children (what social scientists call the “success sequence”) are not in poverty but have reached the middle class or above.

Rewriting history does nothing to improve the quality of life for disadvantaged individuals. If those behind the 1619 Project want to change the future, then their aim should be to promote policies proven to create opportunities, not policies doomed to fail and further divide us.