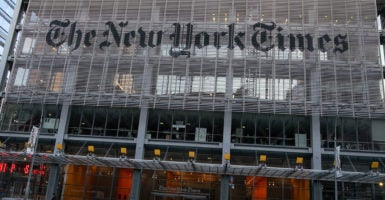 The Pulitzer Center is now promoting the The New York Times' 1619 Project as a curriculim reaching tens of thousands of students. Pictured: The New York Times office in Manhattan closed amid the coronavirus outbreak. (Photo: Braulio Jatar/Echoes Wire/Barcroft Media/Getty Images)

The Pulitzer Prize Board recently awarded its commentary award to The New York Times’ Nikole Hannah-Jones for her essay launching the “1619 Project.” This will accelerate a trend already underway: subjecting schoolchildren to a curriculum that blames slavery on capitalism and whose creator believes socialism offers the best path to racial equity.

The overt political nature of the 1619 Project should alert parents, educators, members of school boards, and political leaders that a major political experiment is being practiced on the nation’s schoolchildren.

The 1619 Project isn’t just a series of articles placing slavery at the center of the American story. It is also a curriculum that is sweeping the land. No sooner had the prize been announced than the Pulitzer Center—which is independent of the prizes—was using it to promote that curriculum.

The center boasted that it had “connected curricula based on the work of Hannah-Jones and her collaborators to some 4,500 classrooms since August 2019.”

The center also reported the following highlights: tens of thousands of students are now using the curriculum; tens of thousands of copies of the magazine have been shipped to K-12 schools, community colleges, HBCUs, and other colleges; and the school systems of Buffalo, Chicago, Washington, D.C.; Wilmington, Delaware; and Winston-Salem, North Carolina, have all adopted the project on a broad scale.

The curriculum provides reading material, activities, videos, graphic organizers, etc., that will indoctrinate young minds on how America and its capitalist system are racist to the core. Its goal: destroy our present institutions, economic system, and ways of thinking, and replace them.

Consider the opening line of the essay that won Hannah-Jones the Pulitzer: “Our democracy’s founding ideals were false when they were written.”

The second essay, by Matthew Desmond, declares: “If you want to understand the brutality of American capitalism, you have to start on the plantation.”

These are falsehoods. The evidence is clear that, while the Founders were forced to compromise over the evil of slavery, thinking that it would phase out over time, their assertion that “all men are created equal” and that “we are endowed by our creator with unalienable rights” would eventually help ensure slavery’s destruction.

Also, the free-market system is the opposite of slavery. It is based, and relies upon, private agreements free of coercion.

It is socialism—which forces man to work for others without remuneration, and expropriates private property, which gives man the wherewithal to be free—that is akin to slavery.

It is therefore curious that Hannah-Jones seems enthralled with socialism, especially as it is practiced in the pauperized nation of Cuba.

In 2019, Hannah-Jones told Vox founder Ezra Klein that “if you want to see the most equal, multiracial, it’s not a democracy, but the most equal multiracial country in our hemisphere, it would be Cuba. … Cuba has the least inequality between black and white people of any place in the hemisphere.”

She added for emphasis: “In places that are biracial countries, Cuba actually has the least inequality and that’s largely due to socialism.”

This is all untrue, of course. A country that is now largely black or mixed-race has been ruled by a small, white elite since 1959—ironically when it replaced the mixed-race dictator Fulgencio Batista.

If it sounds like Hannah-Jones’ language comes straight from the propaganda machine of Havana’s communists, that’s because it is. She traveled there in 2008, and upon her return set to write paeans to the revolution that veered between puffery and Orwellianisms.

In one particularly embarrassing passage in an article for The Oregonian, she wrote, “Nearly everywhere among the magnificent Havana architecture signs speak of equality and liberation through education.”

In fact, Havana, a city of great beauty before the revolution, now lies in utter ruin. As the British author Theodore Dalrymple wrote in his memorable “Why Havana Had to Die” in 2002:

Havana was a large city of astonishing grandeur and wealth, which was clearly not confined to a tiny minority, despite the coexistence with that wealth of deep poverty. Hundreds of thousands of people obviously had lived well in Havana. … In the circumstances, therefore, it became ideologically essential that the material traces and even the very memory of that society should be destroyed.

Havana, Dalrymple concluded in his piece, “stands as a dreadful warning to the world—if one were any longer needed—against the dangers of monomaniacs who believe themselves to be in possession of a theory that explains everything.”

Will America’s parents and educators heed these words? A preliminary review of polling conducted by The Heritage Foundation reveals that while some parents may be open to discussion of slavery in the classroom, they are resolutely opposed to changing our system or institutions.

They will have to unite and act, now that the Pulitzer Board has allowed its coveted prize to be used in selling this project.