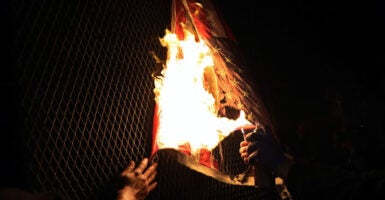 The country cannot function when it is divided. But that is what identity politics, and those who implement it, is doing to the U.S. Pictured: Rioters burn an American flag in front of the Mark O. Hatfield Federal Courthouse in downtown Portland on July 25. (Photo: Spencer Platt/Getty Images)

America’s founding creed is “e pluribus unum.” “Out of many, one.” That is the motto that appears on the seal of the House of Representatives. The greatness of America comes from the melting of many cultures and ethnic backgrounds into one American family.

Neither Congress, nor this nation, can function when it is divided along demographic lines. But that’s exactly what a dangerously large group of individuals in the modern Democrat Party are now intent on doing.

To make matters worse, these same individuals falsely smear Republicans with vile labels like racist and sexist during honest policy debates, while excusing blatant racist acts on their own side.

For example, it was discovered last year that Virginia Gov. Ralph Northam literally wore either blackface or a Ku Klux Klan hood—he couldn’t decide which. But he was let off the hook, and he still has his job.

Let’s be honest here: No fair-minded person could deny that if that were a conservative governor, he would have been run out of office the same day by the very leftist politicians who allowed Northam to skate.

Why is that? Because it’s assumed by liberal coastal elites who dominate our media and shape our popular culture that Democrats have pure hearts and that Republicans are diabolical.

To leftists, producing liberal policy victories is more important than standing against hate on their own side. How else do you explain the consistent mainstream media narrative that reports Republican mistakes as news, but buries Democrat errors under a headline of “Republicans Pounce”?

While leftists use the Black Lives Matter movement to excuse the destruction and looting of black small businesses and black homes, we hear nothing from leftists on the House floor pushing back on this violence.

We don’t hear about the death of St. Louis Police Chief David Dorn. He was killed by rioters. Our hearts break for his family because his life mattered, too.

Furthermore, it is offensive for leftists to insinuate that law and order policies don’t matter to African Americans. The silence is perhaps most deafening when it comes to abortion in the black community, a killer of more than 20 million black lives in the United States since 1973. Our hearts break because unborn black babies’ lives matter, too.

The woke mob is now “outraged” over federal officers defending federal buildings in Portland because leftist mayors refuse to do their job. I’ve heard those opposed to the presence of federal agents argue that this is about a Republican president trampling on Democrat governors’ rights. They are missing the point. This issue is not about conservatives or leftists, it’s about the difference between safe streets and lawless anarchy.

It just so happens that the lawless anarchy only happens in cities with liberal mayors. If they don’t want to protect the life, liberty, and property of their towns, then the federal government, at the direction of this president, will do it for them.

But I suspect that these bad-faith accusations would be different if the parties were reversed. It all comes down to weaponizing identity politics to divide this country and achieve power.