Q&A: Here’s What Is Happening on the Ground in Portland 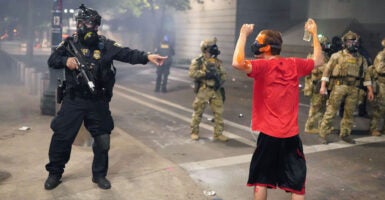 The Department of Homeland Security’s Federal Protective Service is protecting the Mark O. Hatfield U.S. Courthouse, a federal building that has been under attack by rioters for 55 consecutive days. Pictured: A federal officer tells fellow officers to make an arrest Tuesday in front of the courthouse. (Photo: Nathan Howard/Getty Images)

Rioters have had their way in Portland, Oregon, for two months now, sparking the intervention of federal law enforcement to defend government property. Here are answers to some basic questions about what’s going on there.

Why are federal agents in Portland?

Rioters and criminals have been attacking federal law enforcement officers and the Mark O. Hatfield U.S. Courthouse in Portland for over 55 consecutive days.

The Department of Homeland Security has sent cross-designated law enforcement officers from U.S. Customs and Border Protection and Immigration and Customs Enforcement to support the Federal Protective Service officers in protecting the federal courthouse and the federal officers inside it from violent rioters.

The Department of Justice’s U.S. Marshals Service also is supporting the Federal Protective Service at the courthouse. Every federal officer protecting the courthouse and staff in Portland have received the service’s specific training for that role.

The rioters are premeditated criminals who have been bringing dangerous weapons to the courthouse each night and using them against federal officers. These include lasers aimed at officers’ eyes, pipes, pipe bombs, sledgehammers, baseball bats, glass bottles, and mortar-style fireworks to start fires in the courthouse while barricading exits.

Why can’t Portland police resolve this?

Because federal property has been under attack in Portland, this is a multijurisdictional issue among federal, state, and local government agencies.

Unfortunately, the federal government faces opposition rather than cooperation from state and local leaders. Portland Mayor Ted Wheeler, a Democrat, has stated multiple times that the federal agents should leave Portland because they are provoking the “protesters.”

He and other local Portland leaders have tied the hands of Portland police, including preventing Department of Homeland Security officers from working in the incident command center operated by Portland police.

Shutting down this cross-jurisdictional communication is dangerous and could lead to an accidental officer-on-officer injury, or worse.

The media is reporting that federal agents are not identifying themselves when arresting rioters in Portland. Is that correct?

It is false that federal law officers are not identifying themselves. The officers have been wearing the same type of uniforms every day in front of the same crowd.

Officers do identify themselves when they arrest a suspect.

Must federal officers provide a Miranda warning when arresting someone?

To receive a Miranda warning, a suspect must be 1) in police custody and 2) under interrogation.

Some rioters have been arrested for committing federal crimes, including assaulting federal officers, suspected arson, and trespassing on federal property.

The media is also reporting that federal agents are using unmarked cars to travel throughout Portland and to stop individuals. Is that correct?

It is common for all law enforcement agencies to use unmarked vehicles to perform some duties.

Do these federal officers have authority to arrest people in Portland?

Federal law officers can arrest those who assault law enforcement officers wherever officers find them.

Often, it is safer to arrest such assailants blocks away or later, when the crowd calms down.

Why has this confrontation in Portland gone on for so long?

The criminal attacks on federal property and officers have occurred over 55 consecutive nights because state and local leaders have abdicated their duty to protect their city and citizens. They still label these events as “peaceful protests” stemming from the wrongful death of George Floyd in police custody in Minneapolis.

These violent, premeditated attacks, however, are anything but peaceful, protest nothing, and bring no justice for Floyd’s death.

As America has seen in Seattle’s so-called Capitol Hill Autonomous Zone—a police-free zone that caused destruction and death—when a local leader has the will to take control over anarchy, order can be quickly restored.

Portland’s leadership needs to choose order and preservation of life and property over the demands of the angry mob.