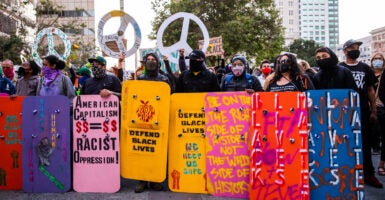 "The Plot to Change America" by Mike Gonzalez gives an account of the rise of identity politics and its impact on the American system. Pictured: Protesters carry painted riot shields during a march on July 25 in Oakland, California. (Photo: Natasha Moustache/Getty Images)

The following is an excerpt from the introduction to “The Plot to Change America: How Identity Politics is Dividing the Land of the Free,” a new book by Mike Gonzalez, senior fellow at The Heritage Foundation’s Allison Center for Foreign Policy and Angeles T. Arredondo E Pluribus Unum fellow, published by Encounter Books.

Identity politics is all around us. Whether you know it or not, we are all bathing in it. Some Americans have embraced it gladly, while others have simply become inured to it and no longer bat an eyelid. Many others, however, have begun to take notice, and to them something does not seem right.

If you are one of the latter, you raise an eyebrow when the princi­pal at your daughter’s school repeats the incantation “diversity is our strength!” and you hear that some subjects, even math, are taught differently depending on a student’s race.

You think of Orwell—“War Is Peace,” “Freedom Is Slavery.” But you understand why parents don’t put up a fuss. Who wants to get on the wrong side of the principal by explaining to her that, in fact, we can observe in the laws of physics, and in the social sciences, that it is unity that forges strength? Who wants to tell her that two plus two always equals four no matter what your race is?

Again, you understand why so many of your colleagues put the darn sign on their desk, and you refrain from asking about rumors that another session is afoot to uncover employees’ subconscious bias.

Back at home, when the talking head on TV spends the first 10 minutes of airtime discussing all the identity groups that the newly elected dogcatcher belongs to, you want to snap back, “Who cares? Can she catch strays?”

Only crazy people talk to the TV, however. But you do talk back when the next news item is about a father who has lost custody of his 7-year-old son because he disagrees with his estranged wife, who wants the boy to “transition” into a girl.

Later that evening, when your own son, who is applying to college, announces he will identify as Hispanic because your mother’s father was born in Monterrey, your first reaction is to tell him, “But I never even met Grampa Ortiz.”

On second thought, it might get Jimmy into Cornell, so you repress the unease you feel about gaming the system. You also feel relieved that, if he’s no longer considered white, at least he won’t be made to feel at fault for everything.

At the same time, it will sting your neighbor deeply when he finds out that his small company did not get the city contract. He couldn’t produce a narrative of oppres­sion, and someone else got the contract through a set-aside program.

His mother’s father was born in Salerno, and after immigrating was repeatedly beat up by rough Irish kids in Boston. But that doesn’t do your neighbor any good, since Italians are not one of the designated oppressed minorities.

Or say you’re an immigrant from Peru’s port of Callao. You came to New York in the 1970s, settling in Queens with dreams of becom­ing American and one day having American children, the same as other Americans.

Soon after your arrival, however, you heard people on TV saying that you were now a third thing, a Hispanic, and you should be proud of belonging to this category. Joining the American mainstream was an unattainable goal, said these loud people, and you shouldn’t aspire to it, anyway. America is a racist place, they went on, and if you wanted to have a measure of success, you had to join this massive new ethnic collective.

All this disturbed you somehow, even if you could not articulate why. Decades later, it dawns on you that you had been enlisted into a struggle to overturn the very country and system that had attracted you to emigrate in the first place, and you are not happy about this.

But what is identity politics, anyway? In a Twitter exchange on this question with Vox Media reporter Jane Coaston last year, I took a stab at defining the term:

I mean the deliberate creation of pan-ethnic and other identity groups; the idea that members of this panoply of collec­tives should get compensatory justice; the culture of victimhood all of this engenders.

Twitter’s character limits force us to cram complicated ideas into pithy epigrams, and in my tweet I tried to concisely pres­ent the main elements of what has become an ideology of our times. The purpose of this book is to explain how and why these elements came together, who was behind the ideology’s rise, and what we can do about it.

Many theories have been put forward to explain how this ideology was suddenly sprung on America. They cover the gamut, from the demise of the family, to the erosion of social capital in many working-class neighborhoods, to the absence of a unifying enemy following America’s victory in the Cold War.

What follows in this book is a more-or-less-chronological account of the rise of identity politics, put in the context of the doctrines and philosophies that fed into it, and discussion of its impact on the American system and the threat it poses to the liberties that sustain the American way of life.

We have identity politics today because our government has created ethnic and sexual categories whose members have been instilled with resentments against the country and its system and given real financial benefits for nursing their grievances. Insisting on group grievances thereby perpetuates the identity groups. If we stop this vicious cycle, we may be able to free ourselves from the grip of identity politics.

The book traces the origins of identity politics to the late 1960s and 1970s, when the white establishment panicked over the black riots then tearing up parts of northern cities.

This panic led to two main outcomes. First, members of the establishment offered “temporary” racial benefits to pacify Northern blacks, who had seen fewer advances than their Southern counterparts during the civil rights era.

Second, they accepted the assertion by leftist activists claiming to mediate on behalf of other groups that there was an analogy to be made between the suffering of blacks and the experiences of Americans of Mexican, Chinese, Puerto Rican, Japanese, Filipino, and other descents. This analogy, which was also extended to women as a group, was drawn over and over.

It was, of course, dishonest and deceitful: The experi­ence of black Americans was in fact unique. Nevertheless, this way of thinking led in time to such absurdities as immigrants fresh off the boat receiving “compensatory justice” for the real and imagined suf­fering of their ancestors.

Racial preferences also never went away, but more than half a century later have become a fixture of American life, and keep being expanded.

As this book further demonstrates, activ­ists of those earlier decades sought to move the country away from its limited-government traditions inherited from the Anglo-Scottish Enlightenment toward the centralized state planning drawn from the Continental Kantian, Hegelian, and Marxian worldviews.

Stated plainly, my goal is to change how the nation thinks about identity politics and identity groups.

We do not have to accept these categories, the discourses of “privilege” and “victimhood,” or politically loaded (and recent) terms such as “minorities,” “diversity,” and “persons of color.” Rather, I seek to snap the country out of its identity trance by exposing the actors, their actions, how they came up with these terms, and the theories that led us to this juncture.

The identity collectives have done nothing to alleviate the very real racial discrimination and social injustice that continues to exist in America—nor were they intended to do so—but have only exacerbated them.