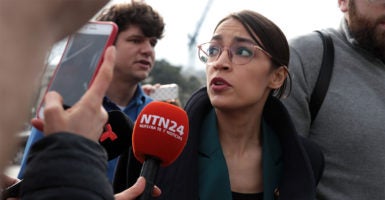 Followed by members of the media, U.S. Rep. Alexandria Ocasio-Cortez, D-N.Y., leaves a news conference at the East Front of the U.S. Capitol on Feb. 7. (Photo: Alex Wong/Getty Images)

In the past few weeks, prominent Democrats have endorsed infanticide; admitted to dressing in blackface; called for an end to fossil fuels, airplanes, and farting cows; and trafficked in open anti-Semitism.

None of this is a serious problem for many in the media. For members of the media, the real story is that Republicans keep pouncing.

Two weeks ago, Virginia Gov. Ralph Northam stated in an interview that he favors legislation that would allow a woman to abort a baby at the point of dilation and then added that in certain cases in which a baby would be born alive, the baby would be kept “comfortable” while parents and doctors decide what to do with it.

This seems rather radical. Here was The Washington Post’s take, as said in a headline: “Republicans seize on liberal positions to paint Democrats as radical.” The positions, you see, are actually mainstream. It’s just that Republicans seized on them and painted them as radical.

Last week, Rep. Alexandria Ocasio-Cortez, D-N.Y., released a Green New Deal backgrounder and FAQ on her website—and her staff sent the six-page document to a variety of media outlets. The document happens to be fully insane.

It calls for America to be carbon emissions-free within 10 years without use of nuclear power. It suggests that every building in the country be either replaced or retrofitted. It calls for universal health care, free college education, replacement of airplanes with high-speed trains, replacement of “every combustion-engine vehicle,” government-provided jobs, abolition of “farting cows,” and, best of all, total “economic security” for anyone “unwilling to work.”

The proposal is so farcical that even Democrats ran from it screaming. AOC took it down from her website and then deployed campaign aides to state that the document was “accidentally” released as an “early draft.” Unsurprisingly, no revised draft has been posted.

This week, Rep. Ilhan Omar, D-Minn., engaged in open anti-Semitism, suggesting that American support for Israel is “all about the Benjamins” and then doubling down on that comment by blaming the American Israel Public Affairs Committee for America’s pro-Zionist attitude.

This follows years of overtly anti-Semitic content from Omar, as well as from Rep. Rashida Tlaib, D-Mich., who suggested back in January that Americans who like Israel suffer from dual loyalty and “forgot which country they represent.”

Now, pouncing is never a story. Ever. It is a simple fact of politics that when people screw up, their political opponents react with alacrity. Highlighting that response rather than the underlying screw-up is the equivalent of a headline that reads “Sun Rises in Morning.”

Yet that’s what the media do … whenever Democrats screw up. Republican gaffes are a story in and of themselves. Democratic gaffes aren’t a story; Republican nastiness is.

All of which demonstrates that a huge swath of the media is inseparable from the Democratic Party. If your first response to Democratic nut-jobbery is to get defensive about Republican blowback, you’re no longer a journalist. You’re merely a hack. You are, as President Donald Trump would put it, “fake news”—an activist masquerading as a journalist.

I suppose this means I’m pouncing on the media, though.