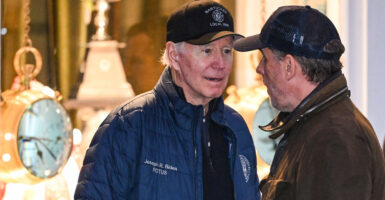 The chairman of a key House committee says he wants to know more about Twitter’s censoring of the New York Post’s reporting on the contents of Hunter Biden’s abandoned laptop just before the 2020 presidential election. Pictured: President Joe Biden talks with his son Hunter while shopping Nov. 25 in Nantucket, Massachusetts. (Photo: Mandel Ngan/AFP/Getty Images)

The House Oversight and Reform Committee has asked three former Twitter executives to answer questions about suppressing negative news of Hunter Biden before the 2020 election.

“For the past two years, the Biden administration and Big Tech worked overtime to hide information about the Biden family’s suspicious business schemes and Joe Biden’s involvement,” Comer said in a prepared statement. “Now that Democrats no longer have one-party rule in Washington, oversight and accountability are coming.”

“If you just step back for a second and think about this, we have a government agency, or someone who is influential in the government, calling a private company [and] asking for messaging to be suppressed,” Hern told The Daily Signal in an in-person interview. “That should bother everybody, regardless of whether you are a Republican or Democrat.”

Hern noted this became known only because of the release of the so-called “Twitter Files,” in which new Twitter CEO Elon Musk releases internal information about the company’s past practices through trusted reporters.

“This is the kind of thing that makes most Americans fear Big Tech,” Hern said. “Both Democrats and Republicans should be very concerned. It should be a bipartisan approach to fix this. We shouldn’t have publicly traded companies in the technology space, purporting to be an avenue of the First Amendment, out there influencing and suppressing speech based on somebody that called them.”

“For years, the Biden family peddled influence and access around the world for profit, often at the expense of our nation’s interests,” Comer said. “The American people must know the extent of Joe Biden’s involvement in his family’s shady business deals and if these deals threaten national security and his decision making as president.”

Hern, the chairman of the Republican Study Committee, has a background in the banking industry as well as other businesses. The Oklahoma Republican noted that disclosure rules must apply equally and, in the past, the Treasury Department provided such information when Congress requested it.

“We need to know where money is going around the country. There is a federal mandate,” Hern told The Daily Signal, adding:

If one group is allowed to suppress those over another, that’s problematic. We need an open and transparent government, as much as can be done, not one that has been closed up and weaponized.