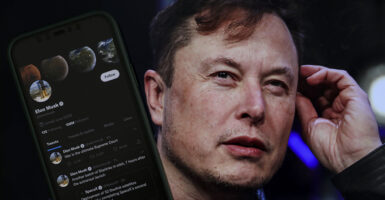 Taibbi’s Twitter thread, which Musk retweeted, revealed that Twitter’s top executives didn’t have a good explanation for censoring the story, but stuck with the decision, anyway. It also showed that Republican and Democratic congressional staff weighed in against the move.

Taibbi recounted that Twitter took “extraordinary steps” to suppress the Post’s Oct. 14, 2020, story reporting on emails from Hunter Biden’s laptop implicating Joe Biden in his son’s foreign business dealings. The social media company even went so far as “removing links and posting warnings that it may be ‘unsafe.’ They even blocked its transmission via direct message, a tool hitherto reserved for extreme cases, e.g. child pornography.”

Twitter locked then-White House press secretary Kaleigh McEnany out of her account for tweeting about the story. Taibbi shared an email from then-President Donald Trump’s reelection campaign staffer Mike Hahn, who noted that all McEnany did was “cite the story and firsthand reporting that has been reported by other outlets and not disputed by the Biden campaign.”

“I need an answer immediately on when/how she will be unlocked,” Hahn added. “At least pretend to care for the next 20 days,” he added, referencing the election.

Taibbi next shared a message from public policy executive Caroline Strom, who asked her coworkers, “Are you able to take a closer look here?”

An analyst responded that “the user was bounced by Site Integrity for violating our Hacked Materials Policy.”

Yet it remains unclear what sparked the initial decision to censor the story, according to Taibbi.

“Although several sources recalled hearing about a ‘general’ warning from federal law enforcement that summer about possible foreign hacks, there’s no evidence—that I’ve seen—of any government involvement in the laptop story,” he wrote. “The decision was made at the highest levels of the company, but without the knowledge of CEO Jack Dorsey, with former head of legal, policy and trust Vijaya Gadde playing a key role.”

Taibbi quoted one former employee, who said of the decision, “They just freelanced it.”

“Hacking was the excuse, but within a few hours, pretty much everyone realized that wasn’t going to hold. But no one had the guts to reverse it,” the employee reportedly added.

Taibbi shared a few messages illustrating the confusion. Communications staffer Trenton Kennedy wrote: “I’m struggling to understand the policy basis for marking this as unsafe, and I think the best explainability argument for this externally would be that we’re waiting to understand if this story is the result of hacked materials. We’ll face hard questions on this if we don’t have some kind of solid reasoning for marking the link unsafe.”

“By this point ‘everyone knew this was f—ed,’ said one former employee, but the response was essentially to err on the side of … continuing to err,” Taibbi added.

Yoel Roth, Twitter’s then-safety chief, cited “hacked materials” as the policy rationale, but noted that “this is an emerging situation where the facts remain unclear. Given the SEVERE risks here and lessons of 2016, we’re erring on the side of including a warning and preventing this content from being amplified.”

Brandon Borrman, then Twitter’s vice president of global communications, asked, “can we truthfully claim that this is part of the policy?”

Jim Baker, then-deputy counsel, wrote that “caution is warranted.” He suggested Twitter “assume” that the materials “may have been” hacked, even as he noted that “some facts” indicated “that the computer was either abandoned and/or the owner consented to allow the repair shop to access it for at least some purposes.”

Taibbi noted that some Twitter staffers seemed not to understand the basic tenets of the First Amendment and Supreme Court jurisprudence on it.

He cited an exchange between Rep. Ro Khanna, D-Calif., who alerted Twitter to the “huge backlash” this move had been generating among members of Congress on the issue of “speech,” as in free speech.

Gadde replied, noting that McEnany’s account “was not permanently suspended—we requested that she delete the tweet containing material that is in violation of our rules and her account is restricted until she complies.”

Gadde noted that Twitter “put out a clarifying threat of Tweets earlier this evening to explain our policy around the posting of private information and linking directly to hacked materials,” as if this policy would resolve any free speech concerns.

Khanna replied, “But this seems a violation of the 1st Amendment principles. If there is a hack of classified information or other information that could expose a serious war crime and the NYT [The New York Times] was to publish it, I think the NYT should have that right.”

“A journalist should not be held accountable for the illegal actions of the source unless they actively aided the hack,” the congressman added. “So to restrict the distribution of that material, especially regarding a Presidential [sic] candidate, seems not in the keeping of the principles of [the 1964 Supreme Court case] NYT v. Sullivan.”

Khanna continued, “I say this as a total Biden partisan and convinced he didn’t do anything wrong. But the story now has become more about censorship than relatively innocuous emails and it’s become a bigger deal than it would have been.”

Carl Szabo of the research firm NetChoice sent Twitter staffer Lauren Culbertson an email with the results of a quick poll involving congressional staffers. The survey suggested that a “blood bath” would await the company in congressional hearings, and that nine Republican staffers said, “this is a tipping point. It’s just too much.”

One staffer said the scandal represented “tech’s ‘Access Hollywood’ moment and it has no Hillary to hide behind.” Another said, “tech is screwed and rightfully so.”

“In their mind, social media … doesn’t moderate enough harmful content so when it does, like it did yesterday, it becomes a story. If the companies moderate more, conservatives wouldn’t even think to use social media for disinformation, misinformation, or otherwise.”

Taibbi noted that Twitter’s Hunter Biden move followed an increasing censorship trend. While “some of the first tools for designing speech were designed to combat the likes of spam and financial fraudsters,” outsiders started “petitioning the company to manipulate speech.”

Although Twitter received and honored requests from both team Trump and team Biden, “the system wasn’t balanced” but rather “based on contacts,” and Twitter’s staff leaned heavily Democratic. Indeed, Twitter staff long have leaned left, with 99% of their donations going to Democrats in the 2022 midterms, as they did in previous years.

“Musk has done what lawmakers should have already accomplished: exposing Big Tech companies as foot soldiers of the progressive Left,” Frederick added. “When Americans believe the 2020 presidential election outcome would have changed given information deliberately hidden by the Left with the help of Big Tech, apologies from former Silicon Valley executives will not cut it.”

Although it is impossible to know what would have happened had Twitter not suppressed the Post’s reporting on the contents of Hunter Biden’s laptop, a Media Research Center poll conducted in the days after the 2020 election found that 36% of self-described Biden voters said they were not aware of the evidence behind claims that Joe Biden was personally involved in his son Hunter’s business deals with China, a claim bolstered by emails found on Hunter’s laptop. Thirteen percent of those voters (4.6% of all Biden voters in the sample) said that if they had known the facts, they would not have voted for Biden.

Such a shift away from Biden would have given Trump the election, according to the Media Research Center’s analysis of the election results. Had the Biden-China story seen the light of day, Trump would have won the election with 289 electoral votes, the analysis claimed.

Twitter also banned conservatives, including a Heritage Foundation expert, shortly before the 2022 midterms.

Frederick added that “Americans should not have to rely on billionaires to deliver this necessary transparency,” and that elected officials should “constrain Big Tech’s pernicious practices. It is past time for aggressive reforms and proper oversight to ensure that Big Tech is held accountable.”