The Left’s Need to Control All Information 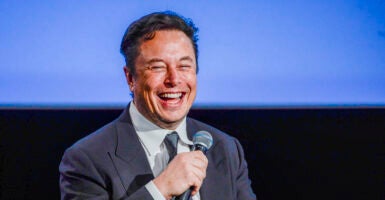 The rise of free speech in such a large, international media arena, courtesy of entrepreneur Elon Musk, means a loss of power for the Left. Pictured: Musk addresses guests Aug. 29 at the Offshore Northern Seas 2022 meeting in Stavanger, Norway. (Photo: Carina Johansen/NTB/AFP/Getty Images)

Entrepreneur Elon Musk is taking over Twitter and the Left is melting down.

On Thursday, Musk officially completed his $44 billion acquisition of the social media giant. He immediately began to shake up the company and fired four key members of upper management.

Many on the Left are having a fit over the idea that the most powerful elite opinion- and news-shaping tool no longer is going to be fully under their control. Some are downright apocalyptic.

“This is an emergency! Twitter is to be taken over by the evil Sith lord,” tweeted journalism professor Jeff Jarvis.

Other prominent left-wing journalists also dredged up the entirely original argument that Musk’s acquisition of Twitter means that the rise of fascism is imminent.

Economist Robert Reich tweeted his worry about a “billionaire” taking over Twitter.

When powerful billionaires such as Amazon’s Jeff Bezos own The Washington Post or other opinion-shaping platforms, those on the Left generally don’t care. Their opposition is tepid at best.

As soon as someone is in charge who they don’t think they can control, though, they cry “fascism.”

They are unafraid to manipulate the system, undermine free speech, and outright suppress political opponents because they think that conceding an inch of ground or losing an election threatens their entire political project.

With the change of ownership, Twitter no longer can be relied upon as a tool to shape the narrative as they see fit. That’s what the Left’s panic is about.

Currently, the Left controls much of civil society and the flows of information. One institution after another now begins to mimic a modern college campus, where dissenting ideas are suppressed and left-wing activists are given what they want whenever they throw a tantrum.

Even more, the Left is quite willing to use government agencies to further manipulate social media companies to censor American citizens.

For instance, The Intercept reported Monday that the Department of Homeland Security planned to coordinate with Big Tech companies through the Orwellian-sounding Disinformation Governance Board, which was shelved after receiving significant blowback from the public.

The Ministry of Truth got put on hold, but it’s clear that for years federal government agencies have been and still are cooperating with platforms such as Twitter to “flag” and suppress content they don’t like.

There were some seriously disturbing revelations in The Intercept’s report. As I wrote after the 2020 election, the fact that Big Tech companies were willing to censor a president was scary stuff because those companies had even more power to destroy people who don’t have such power and influence.

The Intercept highlights this and recounts how the Department of Homeland Security emailed a Twitter official about “a potential threat to critical U.S. infrastructure, citing FBI warnings.”

What was this great threat to national security? From The Intercept:

The Twitter user in question had 56 followers, along with a bio that read ‘dm us your weed store locations (hoes be mad, but this is a parody account),’ under a banner image of Blucifer, the 32-foot-tall demonic horse sculpture featured at the entrance of the Denver International Airport.

‘We are not sure if there’s any action that can be taken, but we wanted to flag them for consideration,’ wrote a state official on the email thread, forwarding on other examples of accounts that could be confused with official government entities. The Twitter representative responded: ‘We will escalate. Thank you.’

Instead, Musk has said publicly that he wants to ensure Twitter is a free speech platform, where open debate can take place without manipulation in a kind of digital town square. He also may invite back banned users such as former President Donald Trump.

The rise of free speech in such a large, international media arena means a loss of power for the Left’s side.

It demonstrates how immense the institutional power disparity is between the Left and Right in America. The attitude between the sides is drastically different. While the Right has concerns about massive social media companies and the likes of Amazon censoring conservatives, the Left worries about a small-time, independent Christian businessman in Colorado, Jack Phillips, who refuses to bake a custom cake for a gay wedding or gender transition.

Losing control of a powerful platform like Twitter is almost unimaginable to the Left. It’s an especially big blow right before an election, where subtle and overt manipulation of information can have the most widespread political effect. The Left considers this an existential threat.

Left-wing magazine The New Republic, for instance, ran a piece arguing that allowing free speech on Twitter will lead to the rise of fascism. Again, so original.

“Twitter without content moderation—and with Donald Trump and others reinvited—means that lies and disinformation will overwhelm the truth and the fascists will take over,” the article’s subheadline says.

The author argues that free speech in Weimar, Germany, was dangerous because it allowed for the transmission of antisemitic publications that “were key contributors to the fall of German democracy, the rise of the Third Reich, and the Holocaust itself.”

The argument appears to be that unless you give the Left absolute control of information, the fascists win. To save democracy, we must crush democracy and freedom of speech, apparently.

This gets to the heart of what President Joe Biden and the Left mean when they say “democracy” is under threat, even when Americans are voting in droves (sometimes especially when they are voting in droves). What they mean is that the Left and liberalism are under threat, that their power isn’t assured, and that somebody, somewhere isn’t going along with their program—like that beleaguered Colorado baker.

Musk’s acquisition of Twitter does not solve the issues with Big Tech, the takeover of our institutions, or the imperiousness of federal agencies. One billionaire is not the cause nor the solution to all our problems.

The change to Twitter does, however, mean that one of the world’s most powerful media information tools no longer may be so easily manipulated by ideological zealots from within and, hopefully, governmental agencies from without.

Musk’s ascent is bad news for the Left, good news for free speech, and even better news for America.