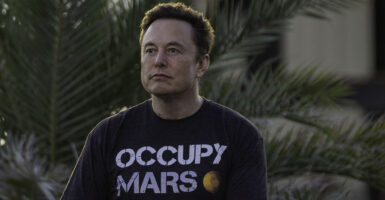 The European Union says that under new CEO Elon Musk, Twitter will have to implement transparent user policies and other reforms. Pictured: Musk, as founder of SpaceX, appears during an Aug. 25 event in Boca Chica Beach, Texas. (Photo: Michael Gonzalez/Getty Images)

If Elon Musk truly believes that Twitter is a front in the “battle for the future of civilization,” he has a chance to prove it.

The Biden administration has already threatened to investigate Musk on multiple occasions, which isn’t surprising considering its unprecedented antagonizing about free expression.

Democrats such as Sen. Elizabeth Warren of Massachusetts have promised to create new “rules” governing discourse on the private social media platform. (Remember when leftists were pretending to be fans of free-association rights?)

Hillary Clinton’s approach has been more sweeping, calling for the European Union to create a technocratic speech regime to govern American companies to “bolster global democracy before it’s too late.”

And Europe has answered the call. Thierry Breton, the EU’s commissar of “internal market,” says: “Twitter will have to implement transparent user policies, significantly reinforce content moderation and protect freedom of speech, tackle disinformation with resolve, and limit targeted advertising.”

Reuters news agency notes: “Breton told Musk he must adhere to a checklist of rules, including ditching an ‘arbitrary’ approach to reinstating banned users and agreeing to an ‘extensive independent audit’ of the platform by next year.”

For one thing, the EU’s demands are in direct conflict with each other. The state can’t protect “freedom of speech” and compel private institutions to “tackle disinformation” and “reinforce content moderation.” Speech is not free if it needs the state’s imprimatur. And American companies should not function under the authoritarian diktats of the Chicoms or the EU nomenklatura.

It’s helpful to remember that the European Union does not share Musk’s liberal conception of “free speech” as an inalienable right, but rather it views open discourse as a government-provided privilege.

Article 10 of the European Convention on Human Rights begins by promising “the right to freedom of expression,” but soon warns that speech is contingent on the vagaries, conditions, and restrictions of “national security,” “territorial integrity,” the prevention of “disorder or crime,” and “health or morals.”

Or, in other words, the state arbitrarily can impose limits at will—which sounds a lot like the contemporary American Left’s emerging position on free speech.

As anyone who’s been paying attention for the past few years knows, the concept of “dis-” or “mis-” information has been abused for partisan purposes—whether the state colludes with Facebook to ban discussion of the origins of COVID-19 to appease China or pressures tech companies to suppress legitimate news during election season to bolster preferred candidates. This goes on openly in Europe.

Germany also has pressured the European Union to pass internet regulations that purportedly would combat “racism” and “xenophobia,” which every EU member nation has since incorporated into its national legislation. In Germany, citizens can face fines for saying something puerile or hateful, or insulting politicians. Sometimes the police will show up at your home and arrest you.

Hate crimes in Europe, incidentally, only have increased. And Europe remains, by most measures, a far less tolerant place than the United States, where political speech is ostensibly unrestricted. Hate-speech laws are not only illiberal and abused, they’re ineffective.

Hate speech laws in the 1930s failed to stem the tide of European fascism—in fact, in some marginal ways they helped it. Insulting “traditional religious communities,” which included Jews, was illegal in Weimar Germany and carried a three-year prison term. The best way to deal with (real) hate speech is to counter it with enlightened speech and stigmatize it.

Indeed, the EU’s censorship regime illustrates both the inadequacies and dangers of empowering governments to dictate moderation policies or define acceptable free speech. Most tech companies spend tens of millions each year in Washington—and Brussels—rent-seeking and lobbying for favorable regulations and are highly susceptible to state intimidation and threats.

Musk, a beneficiary of this relationship in his other ventures, should call the EU’s bluff and see if it follows through on its threats and bans the platform. What he should not do is cave.