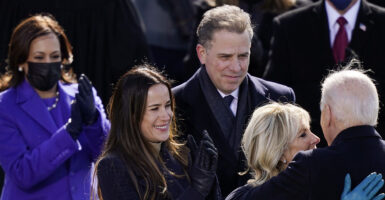 The Twitter Files have shined new light on how the FBI acted to suppress the Hunter Biden laptop story ahead of the 2020 presidential election, even though the FBI could have verified the laptop as early as December 2019. Pictured: President Joe Biden embraces first lady Jill Biden as son Hunter Biden, daughter Ashley Biden, and Vice President Kamala Harris look on after the inauguration on Jan. 20, 2021. (Photo: Drew Angerer/Getty Images)

On Aug. 6, 2020, Grassley and Johnson agreed to meet with the FBI’s Foreign Influence Task Force. During the meeting, the FBI brought up “information that we already knew and information unconnected to our Biden investigation.” Elements of the meeting were leaked to the press, leading to “inaccurate media articles during the course of our investigation which falsely labeled our investigation as advancing Russian disinformation.”

The FBI got its hands on the Hunter Biden laptop all the way back in December 2019, but—according to whistleblowers who spoke to Grassley and Johnson—the FBI failed to investigate the smoking gun claims that Joe Biden himself was involved in Hunter Biden’s lucrative foreign business deals. Worse, the FBI or other intelligence agencies seem to have “pre-debunked” the story, pressuring Twitter and other social media platforms to suppress it as foreign “misinformation” even though the laptop has turned out to be accurate.

In the lead-up to the 2020 presidential election, FBI officials and others in the intelligence community had weekly meetings with Twitter, according to a sworn declaration from Twitter’s former head of site integrity, Yoel Roth.

“I was told in these meetings that the intelligence community expected that individuals associated with political campaigns would be subject to hacking attacks and that material obtained through these hacking attacks would likely be disseminated over social media platforms, including Twitter, Roth said, the New York Post reported. “I also learned in these meetings that there were rumors that a hack-and-leak operation would involve Hunter Biden.”

It remains unclear whether the FBI or a separate intelligence agency had brought up Hunter Biden, but the FBI’s possession of the laptop may have influenced this rumor.

The latest installment of the Twitter Files, published by journalist Michael Shellenberger, shined an important light on this apparent influence campaign.

Both the FBI and Twitter repeatedly stated that there was no Russian attempt to influence the 2020 presidential election in the same way as Russian actors did in 2016. “We did not see any similar competing intrusions to what had happened in 2016,” FBI agent Elvis Chan testified in November 2022. He added that “in an abundance of caution, we warned the companies in case they saw something that we did not.”

14. Were the FBI warnings of a Russian hack-and-leak operation relating to Hunter Biden based on *any* new intel?

“Through our investigations, we did not see any similar competing intrusions to what had happened in 2016,” admitted FBI agent Elvis Chan in Nov. pic.twitter.com/tFPMqbydbA

Internal emails showed Twitter executives complaining about “a sustained (If uncoordinated) effort by the IC [intelligence community] to push us to share more info & change our API policies.”

The FBI appears to have had a very close relationship with Twitter. When James Baker, the former FBI general counsel who played a central role in the Russiagate investigation into then-candidate Donald Trump, joined Twitter, another former FBI employee welcomed him as the newest “Bu alumn.”

29. As of 2020, there were so many former FBI employees — “Bu alumni” — working at Twitter that they had created their own private Slack channel and a crib sheet to onboard new FBI arrivals. pic.twitter.com/prVhPGohOC

The FBI’s Chan arranged for temporary Top Secret clearances for Twitter executives to access FBI information. Twitter also collected $3,415,323 between October 2019 and February 2021, according to an email to Baker. The email mentions “LE-related projects,” likely a reference to “law enforcement-related projects.”

46. The FBI’s influence campaign may have been helped by the fact that it was paying Twitter millions of dollars for its staff time.

It remains unclear when officials at the FBI or another agency first mentioned Hunter Biden to Roth and other Twitter executives, but the FBI had access to the Hunter Biden laptop when Delaware computer repair store owner John Paul Mac Isaac first reached out to the bureau in the fall of 2019. On Dec. 9, 2019, two FBI agents arrived at his store with a subpoena and took the laptop and a hard-drive copy.

After not hearing from the FBI for months, Mac Isaac would later send the laptop to former New York City Mayor Rudy Giuliani, who then forwarded it to the New York Post in early October 2020. The FBI had been monitoring Giuliani at the time.

On Oct. 13, Hunter Biden’s lawyer, George Mesires, emailed Mac Isaac, noting that the New York Post had reached out to him for comment. That evening, the FBI’s Chan sent Twitter’s Roth 10 documents. The next day, the story went up, and Twitter censored it—even blocking transmission via direct message, which Twitter only did for extreme cases such as child pornography.

The first installment of the Twitter Files revealed that Twitter executives did not have a good explanation for censoring the laptop story, but the FBI’s pressure helps explain why Twitter decided to double down “in an abundance of caution.”

By September 2020, Roth and other social media executives met at an Aspen Institute “tabletop exercise” based on a scenario eerily similar to the New York Post story.

“Anonymous website, BIDENCRIMES.info, and a Twitter account, @HUNTERLOLZ, begin posting documents that purport to be from Burisma, tied to Hunter Biden,” the scenario begins. Next, the Drudge Report and Fox News pick up the story, as does then-President Donald Trump. The team debates on how to respond to, and ostensibly suppress, the story.

Perhaps most concerning, the FBI’s influence over social media and other companies seems to extend far beyond Twitter. As Twitter executives prepared for a meeting with the FBI, one executive shared “key takeaways” from a call with the FBI.

“They repeatedly emphasized Twitter’s low level of compliance in comparison with other platforms” when it comes to sending information in response to an FBI “emergency disclosure request,” a request that does not require a warrant.

From this exchange, it appears that the FBI not only works with other companies similar to Twitter, such as Facebook and Google, but that other tech companies are even more compliant with the FBI’s requests.

Although it is impossible to know what would have happened had Twitter not suppressed the Post’s reporting on the contents of Hunter Biden’s laptop, a Media Research Center poll conducted in the days after the 2020 election found that 36% of self-described Biden voters said they were not aware of the evidence behind claims that Joe Biden was personally involved in his son Hunter’s business deals with China, a claim bolstered by emails found on Hunter’s laptop. Thirteen percent of those voters (4.6% of all Biden voters in the sample) said that if they had known the facts, they would not have voted for Biden.

The FBI did not respond to The Daily Signal‘s request for comment about its apparent campaign to suppress the Hunter Biden laptop story, but the bureau responded to Matt Taibbi’s Twitter Files installment with this statement: “The FBI regularly engages with private sector entities to provide information specific to identified foreign malign influence actors’ subversive, undeclared, covert, or criminal activities. Private sector entities independent make decisions.”

Taibbi replied, “That may be true, but we haven’t seen that in the documents today. Instead, we’ve mostly seen requests for moderation involving low-follower accounts belonging to ordinary Americans.”

The Twitter Files suggest a horrifying level of political interference and downright gaslighting on the part of the FBI, in an apparent attempt to help Joe Biden defeat then-President Donald Trump. Some on the Left have suggested that this could not be the case, since Trump appointed FBI Director Christopher Wray, but many Trump appointees and former FBI staff spoke out against the Trump administration’s policies and even fought to restrain Trump from within. The legacy media and many cultural influencers demonized Trump so thoroughly that members of his own administration turned on him, and the Trump White House leaked like a sieve.

The American people deserve to know just how far the FBI went to protect Joe Biden from a negative news story, and they need reassurances that law enforcement will not put its thumb on the scale like this ever again.