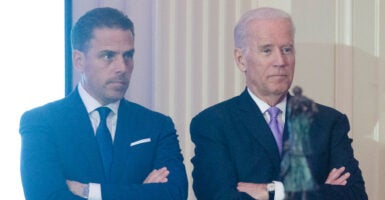 Democratic presidential candidate Joe Biden has long denied that he has any knowledge of, or involvement in, the questionable business dealings of his son, Hunter Biden, or his brother, James Biden. But a deluge of revelations from a laptop reported to have belonged to Hunter Biden and from the on-the-record statements of Hunter Biden and James Biden’s former business partner, Tony Bobulinski, seem to undermine that claim.

The laptop contained “a treasure trove of top-secret material,” according to the Daily Mail, including personal phone numbers for Joe Biden, the Clintons, Secret Service officers, and other senior executive officials. It was secured simply by the password “Hunter02.”

Among the information retrieved from the laptop was an email—its authenticity confirmed by cybersecurity expert Robert Graham—from Vadym Pozharskyi to Hunter Biden thanking him for the opportunity to meet with his father, Joe Biden, while he was vice president.

Pozharskyi was an adviser to the board of the Ukrainian energy company Burisma, on which Hunter Biden sat and earned millions of dollars despite his complete lack of experience in the energy industry.

Joe Biden, while vice president, was successful in getting a Ukrainian prosecutor fired for investigating Burisma after a pressure campaign that apparently included threatening to withhold U.S. military aid from Ukraine.

After the New York Post published that article, and a follow-up article purportedly showing how Hunter Biden tried to leverage his family name in a business deal with China’s largest private energy company, a group of 50 former intelligence officials published a letter claiming that these revelations looked like a Russian disinformation campaign, despite admitting that they “do not have evidence of Russian involvement.”

Their unsubstantiated claim was undermined when Director of National Intelligence John Ratcliffe confirmed there was no evidence that these revelations were part of any Russian disinformation campaign, and when the cybersecurity expert, Graham, confirmed the authenticity of the email from Pozharskyi to Hunter Biden.

The former intelligence officials’ claim was further undermined when the former business partner of Hunter Biden, Bobulinski, corroborated many of the emails and text messages revealed by the New York Post and provided more of his own.

Bobulinski said he came forward only because he was offended by the false claims of Rep. Adam Schiff, D-Calif., chairman of the House Intelligence Committee, who said these revelations about the Bidens were part of a Russian disinformation campaign.

Bobulinski is a former U.S. Navy officer with top security clearances, who served honorably and received decorations, including the Navy/Marine Corps Commendation Medal—as confirmed by the Navy.

In an interview last week with Tucker Carlson of Fox News, Bobulinski explained that he had two meetings with Joe Biden in 2017 concerning the proposed joint venture with a Chinese energy firm. In his telling, he, Hunter Biden, and James Biden aimed to enter into a joint venture with the Chinese firm CEFC China Energy.

Bobulinski reported that Hunter Biden kept Joe Biden in the loop about the deal and even arranged for Bobulinski to meet the former vice president to talk “at a high level” about the business venture.

What’s more, according to Bobulinski, Hunter Biden treated $5 million contributed to the joint venture by CEFC as his “personal piggybank,” and was going to hold 10% of those funds for his father, whom the parties to the agreement referred to as “the big guy.”

According to Bobulinski, Hunter and James Biden went to great lengths to maintain what James Biden called “plausible deniability” of Joe Biden’s involvement.

Since these and other revelations have come to light, Joe Biden and his campaign have not denied any of the specific allegations. They have, however, continued to maintain that Joe Biden has not been involved in any business dealings with his family.

Notably, however, a recent campaign statement dropped the line that Joe Biden never has had knowledge of his family’s business dealings.

Biden’s campaign also has said, without offering evidence, that these revelations are “smears” and part of a Russian disinformation campaign.

A fuller examination of all the revelations to date, in addition to scrutiny of the media’s attempts to bury the story, may be found in journalist Glenn Greenwald’s comprehensive write-up here and columnist Kimberley A. Strassel’s article here.

Our more limited purpose now is to ask, why does this matter?

If true, these revelations confirm that Hunter and James Biden leveraged Joe Biden’s position of power to gain access to financial opportunities with politically connected foreign companies that they were otherwise unqualified for.

This is not, however, new. That Hunter and James Biden have traded on Joe Biden’s influence and power has been known for a long time.

What is new is that these revelations, if true, reveal that Joe Biden knew about these activities, permitted them, and may have participated in them. The American people deserve a fuller explanation from Biden as to the extent of his participation or involvement.

The revelations renew concerns that Biden had possibly used his authority as vice president to aid his son’s business dealings with Burisma in Ukraine, and therefore raise the question whether he would do so again as president.

They also raise questions about serious potential conflicts of interest Biden would face as president between his family on the one hand and the politically connected businesses with whom they are involved on the other.

For example, the chairman of CEFC, Ye Jianming, is (or, perhaps, was; he has disappeared) extremely well connected to Chinese President Xi Jinping, who also is general secretary of the Chinese Communist Party, in addition to other foreign leaders.

In 2017, federal prosecutors arrested another of CEFC’s officers and alleged that he used bribes to secure oil deals in Chad and Uganda, brokered arms deals, and tried to circumvent American sanctions on Iran.

What’s more, while Hunter and James Biden were trying to enter into the joint venture with CEFC, the Chinese energy firm was simultaneously attempting to acquire a 14% ownership stake in Russian state-owned energy company Rosneft, even though it was under heavy American sanctions.

According to Bobulinski, this discovery worried him so much that he pulled out of the joint venture. Not so, however, Hunter Biden. According to text messages that Bobulinski released, and which were shown during his interview with Carlson, Hunter Biden went on to serve as Jianming’s legal counsel in the United States.

In fact, it has been reported that the FBI “took possession of a copy of the computer hard drive” on Hunter Biden’s laptop last December. And a Department of Justice official now has confirmed that the FBI has an active investigation into Hunter Biden and his associates that was opened in 2019 over allegations of possible money laundering.

The FBI has not, however, said whether it is investigating Hunter Biden and his work on behalf of Burisma under the Foreign Agents Registration Act—the law used by special counsel Robert Mueller to go after 2016 Trump campaign officials Paul Manafort and Richard Gates.

Mueller also threatened to use the law against Gen. Michael Flynn’s son to get Flynn, President Donald Trump’s first national security adviser, to plead guilty to a charge of lying to federal agents. Flynn is seeking to withdraw that guilty plea with the support of the Justice Department, which says it has dropped the case against Flynn.

The Foreign Agents Registration Act has been around for over 80 years, but has seen only a few prosecutions at least until recently, including when Mueller decided to use it against former Trump associates. The law requires Americans doing political or advocacy work on behalf of foreign interests, including foreign companies such as Ukraine’s Burisma, to register with the Justice Department and file detailed disclosures about their work.

Under 22 U.S.C. § 611, the Foreign Agents Registration Act applies to someone who represents the “interests of such foreign principal before any agency of official of the Government of the United States.” That would certainly seem to apply to any individual who arranges meetings with, and lobbies, the vice president on behalf of a foreign energy company.

Yet, there is no indication of any investigation of Hunter Biden under the Foreign Agents Registration Act, in contrast to the enforcement actions taken against Manafort and Gates. Interestingly, the inspector general of the Justice Department issued a report in 2016 suggesting a lack of enforcement of this law by the department.

Americans deserve a fuller explanation from several sources on these allegations and their relationship to each other. We should be asking:

1. On what evidence do Joe Biden, Schiff, and the 50 former national security officials base their claim that these allegations are part of a Russian disinformation claim?

2. Has the FBI uncovered evidence that Joe Biden played a more active role in his son’s foreign business dealings?

3. Has the FBI formally declined to pursue an investigation into Hunter Biden under the Foreign Agents Registration Act, and if so, why?

The media, law enforcement, and Congress should pursue the answers to these questions as vigorously as they pursued allegations surrounding the current president and his associates.