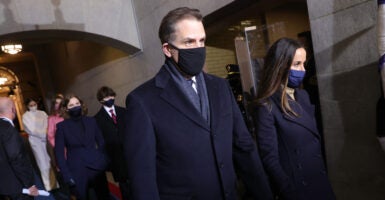 Congressional Democrats have shown little interest in investigating the dubious international business dealings of Hunter Biden, seen here arriving at the Capitol on Jan. 20, 2021, for the inauguration of his father, Joe Biden, as president. (Photo: Win McNamee/Getty Images)

Rep. James Comer, R-Ky., is the ranking member of the House Committee on Oversight and Reform.

Instead of fixing runaway inflation, rising energy prices, and supply chain issues for the American people, the “Bare-Shelves Biden” administration is attempting to persuade you that Hunter Biden’s business dealings are a thing of the past.

It wants you to believe there’s nothing in the president’s son’s suspicious international business dealings the American people should be concerned about.

Hunter Biden has made a fortune capitalizing on his life as Joe Biden’s son to peddle influence and line his pockets. For months, Republicans on the House Oversight and Reform Committee have been investigating and demanding answers into Hunter Biden’s intent to sell his amateur artwork, possibly to influencers in adversaries such as China and Russia, for exorbitant prices.

Unfortunately, Hunter Biden’s pattern of questionable business dealings is far too common and didn’t start when his father became president.

The New York Times recently published an explosive story on Hunter Biden’s role in the sale of one of the world’s richest cobalt mines in 2016. According to the reporting, he helped facilitate the sale of an American-operated African cobalt mine in the Democratic Republic of Congo.

Why is this a problem? Cobalt is one of the most important components of electric car batteries, solar panels, and other conduits for renewable energy. Even worse, Hunter Biden’s firm decided to sell the cobalt mine to a Chinese company.

China understands what’s at stake, and controlling cobalt mines is a severe blow to Americans’ ability to invest in renewable energy technology. In fact, it jeopardizes our ability to prioritize domestic innovation and adopt green energy at a faster rate.

At the time of the sale, the Obama administration, with Joe Biden as vice president, was aware of cobalt’s importance to the global economy, but did nothing to intervene in Hunter Biden’s Beijing-backed transaction.

There was once a time when the business dealings of a  president’s son would have received wall-to-wall coverage on every major media network in America. Now, that standard no longer seems to apply.

America’s reliance on cobalt was cemented this year after Joe Biden signed one of his many executive orders. In August, the administration laid out its goal to have electric and other zero-emissions vehicles make up half of new cars and trucks sold in the U.S. by 2030.

The legacy media might not care that Hunter Biden’s actions have been a boon to Beijing and a detriment to the availability of clean energy, but many Americans do.

Today, the United States’ ability to lead the world in renewable energy is threatened directly by Hunter Biden’s actions, despite promises by his father to make the environment a priority. The House under its current leadership has failed to hold this administration accountable and continues to turn a blind eye to serious issues.

The American people deserve answers on the extent of Hunter Biden’s business dealings, both domestic and abroad. They also deserve answers regarding why the Obama administration—whether at then-Vice President Joe Biden’s behest or not—watched in silence as an American company transferred control of this critical element to a Chinese conglomerate.

If we fail to seek the truth and hold this administration accountable, Hunter Biden will continue to place profits over people and country. In this case, he appears to have profited in the short term directly from America’s long-term loss.

That’s why I’m now requesting from the National Archives all documents and communications from the Executive Office of the President and the Office of the Vice President from Jan. 1, 2015, to Jan. 20, 2017, regarding Hunter Biden and the sale of this particular cobalt mine.

While Hunter Biden and the White House continue to insist that there’s nothing to be concerned about and that the business dealings and relationships Hunter Biden conducts in secret are totally legitimate, Republicans aren’t convinced.