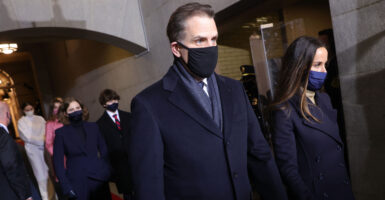 Moving against a Ukrainian oligarch may indicate the Biden administration won’t risk interfering in legal matters that could lead back to President Joe Biden's son, Hunter. Pictured: Hunter Biden and sister Ashley Biden arrive Jan. 20 for their father's swearing in as president at the Capitol. (Photo: Win McNamee/AFP/ Getty Images)

The Ukrainian oligarch whom the Biden administration banned from the United States this month previously had overlapping financial interests with President Joe Biden’s son Hunter, according to government documents and earlier news reports.

Igor Kolomoisky, a Ukrainian billionaire known for hardball actions against competing companies, is a former government official in Ukraine and also used to be an owner of one of that nation’s largest financial institutions, PrivatBank.

Last year, under the Trump administration, as the Justice Department investigated Kolomoisky’s U.S. assets, the FBI raided Optima Management Group, a U.S. real estate company that Kolomoisky has a stake in.

The Biden administration has cranked matters up, with Secretary of State Antony Blinken announcing March 6 that the U.S. would freeze Kolomoisky’s U.S. assets and ban him from reentering the country.

In a separate probe, the U.S. Attorney’s Office in Delaware has been investigating Hunter Biden’s overseas business relationships and taxes since 2018.

Moving against Kolomoisky could indicate the Biden administration won’t take the political risk of interfering in legal matters that could lead back to the younger Biden, said Peter Flaherty, chairman of the National Legal and Policy Center, a conservative government watchdog group.

“The investigation into Kolomoisky proves that the administration isn’t just going to make this [investigation] go away, and that is a good thing,” Flaherty told The Daily Signal in a statement.

Flaherty said it is “almost impossible” to operate in Ukraine’s business environment without the oligarch. Still, Flaherty said, he has not seen evidence that Hunter Biden and Kolomoisky directly met.

“Clearly, their interests overlapped,” Flaherty said. “Even if there was not conspiracy or coordination between the two, Hunter was clearly in Kolomoisky’s web.”

Government records also refer to Kolomoisky as Kolomoyskyy. These records spell his first name as Ihor, but many media reports refer to him as Igor.

Connections at a Glance

Among the indirect connections between Kolomoisky and the younger Biden:

Kolomoisky’s U.S.-based lawyer, Michael Sullivan of the Ashcroft Law Firm, did not respond to phone and email inquiries from The Daily Signal about this report.

Hunter Biden’s lawyer, Chris Clark of Latham and Watkins, also did not respond to phone and email messages, nor did the White House.

Kolomoisky used to run PrivatBank, a major Ukrainian financial institution, which reportedly had a controlling interest in Burisma Holdings, which employed the younger Biden.

Other media outlets have questioned whether PrivatBank had a stake in Burisma.

In 2016, Ukraine nationalized PrivatBank from Kolomoisky and his business partner, Gennadiy Boholiubov.

A U.S. Justice Department civil forfeiture complaint from December said the two men “embezzled and defrauded the bank of billions of dollars.” The complaint, the third filed that year against Kolomoisky’s U.S. associates, alleges that money used by the associates to buy commercial real estate in Cleveland was acquired using funds misappropriated from PrivatBank.

Kolomoisky’s financial interests in the United States had a detrimental impact on several American communities, according to a detailed report from the International Consortium of Investigative Journalists published in September.

After Ukraine took over PrivatBank, Kolomoisky self-exiled in Switzerland and later moved to Israel before returning to Ukraine, according to The New York Times.

State Department emails from 2015 between State Department officials and officials in the office of then-Vice President Biden refer to a Russian media outlet that called Hunter Biden an employee of  “Burisma Holdings, part of Kolomoisky’s financial empire.”

The emails were obtained last year by the Senate Committee on Homeland Security and Governmental Affairs, which investigated Burisma.

Separate emails published in the New York Post in October indicate that Hunter Biden introduced—or wanted to introduce—his father to Burisma’s No. 3 official, Vadym Pozharskyi, whom the newspaper identified as a “fixer” for Kolomoisky.

An email from Pozharskyi to the younger Biden in April 2015 reportedly said: “Dear Hunter, thank you for inviting me to DC and giving an opportunity to meet your father and spent [sic] some time together. It’s realty [sic] an honor and pleasure.”

The talk of a meeting between Joe Biden and Pozharskyi occurred before Biden, as vice president, pressured Ukrainian officials with the loss of a $1 billion U.S. loan if they didn’t fire a chief prosecutor who said he was investigating Burisma for corruption.

In 2015, Russian journalist John Helmer wrote in his book “The Man Who Knows Too Much About Russia” that both Burisma chief Mykola Zlochevsky and Pozharskyi were front men for Kolomoisky at Burisma, the New York Post reported.

Hunter Biden’s legal team denied the unverified claim and decried a “scheme by a nonparty simply to make scandalous allegations in the pending suit to gain media attention without any material or pertinent material.”

Kolomoisky is a citizen of Israel and Cyprus as well as Ukraine. With a net worth of $1.2 billion, he deploys a private army for business interests and also has used the thousands of fighters to go after Russian separatists at war in Ukraine.

In June 2014, someone set a large fire at a Lisichansk refinery owned by Rosneft, a company owned by Russia. Some Russians reportedly suspected that Kolomoisky’s army started the fire to increase his share of the energy market, according to Russian media. No formal charges were brought.

“In his official capacity as a governor of Ukraine’s Dnipropetrovsk Oblast from 2014 to 2015, Kolomoyskyy was involved in corrupt acts that undermined rule of law and the Ukrainian public’s faith in their government’s democratic institutions and public processes, including using his political influence and official power for his personal benefit,” the secretary of state said in his March 6 public statement, adding:

While this designation is based on acts during his time in office, I also want to express concern about Kolomoyskyy’s current and ongoing efforts to undermine Ukraine’s democratic processes and institutions, which pose a serious threat to its future.

This designation is made under Section 7031(c) of the Department of State, Foreign Operations, and Related Programs Appropriations Act, 2020.

Kolomoisky was a supporter of Ukrainian President Volodymyr Zelenskyy and owned the TV network where Zelenskyy previously was a comedian and entertainer.

In May 2019, Kolomoisky had his own bombshell for Ukrainian media, months before a U.S. scandal broke that led to Trump’s first impeachment over a phone call with Zelenskyy.

Kolomoisky told Ukrainian media that Lev Parnas and Igor Fruman visited him to “demand” that he set up a meeting between Zelenskyy and Giuliani, Trump’s onetime lawyer and a former New York mayor. At the time, the two men worked for Giuliani.

“A big scandal may break out, and not only in Ukraine, but in the United States,” Kolomoisky reportedly said. “That is, it may turn out to be a clear conspiracy against [Joe] Biden.”

In a tweet that perhaps didn’t age well, Giuliani went after Kolomoisky and defended Parnas and Fruman, who later were charged with breaking campaign finance laws in the United States.

The incident in which Kolomoisky declined to help Giuliani’s associates also was detailed in the “Trump-Ukraine Impeachment Inquiry Report” issued in December 2019 by Democrats on the House Select Committee on Intelligence.

A law enforcement agency in Latvia launched an investigation into Burisma and $16.6 million allegedly routed to the energy producer through PrivatBank from companies in Belize and the United Kingdom between 2012 and 2015, Just The News reported in September. The Latvian agency is called the Office for the Prevention of Laundering of Proceeds Derived from Criminal Activity.

Since becoming president Jan. 20, Biden has kept his distance from Ukraine and reportedly has not made a call to Zelenskyy.

In the July 25, 2019, phone call between Trump and Zelenskyy, the two leaders talked about the fired Ukrainian prosecutor who had been investigating Burisma, and the possible role Joe Biden played in that firing.

They also discussed U.S. security aid to Ukraine. That phone call became the predicate for the Democrat-controlled House to impeach Trump in late 2019 on charges of abuse of power and obstruction of Congress. The Republican-controlled Senate acquitted Trump of the charges in early 2020.