4 Things to Know About Lev Parnas, the Left’s New Hero 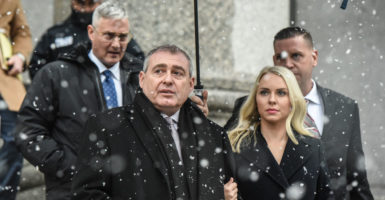 An associate of former New York Mayor Rudy Giuliani, one of the president’s personal lawyers, is the left’s new hero going into the Senate impeachment trial.

He is a native of Ukraine named Lev Parnas, and he and his business partner were arrested in October as they appeared to try to leave the country while under federal indictment for violating campaign finance laws.

“President Trump knew exactly what was going on,” Parnas, 49, told Maddow. “He was aware of all my movements. I wouldn’t do anything without the consent of Rudy Giuliani, or the president.”

Before his arrest, Parnes boasted to the media that he knew of information the government of Ukraine had on former Vice President Joe Biden, which he said U.S. officials were neglecting.

Now, Democrats are eager to work Parnas and the interview into Trump’s impeachment trial.

“Last night’s Lev Parnas interview couldn’t have made it more clear—the Senate must hear from firsthand witnesses and demand the White House turn over documents related to the withholding of military aid from Ukraine,” Sen. Kamala Harris, D-Calif., tweeted.

Trump dismissed the matter Thursday while acknowledging that he and Parnas may have had their photograph taken together.

Here are four key things to know about Parnas.

Parnas and Igor Fruman, his partner who also is charged with campaign finance violations, both were born in the former Soviet Union and are naturalized U.S. citizens.

Parnas was born in 1972 in Odessa, located in today’s southwestern Ukraine. At the time it was still part of the Soviet Union.

His family brought Parnas to Detroit at the age of 3. They later moved to Brooklyn. He attended Brooklyn College and Baruch College before going to work in real estate.

At Giuliani’s behest, Parnas and Fruman traveled to Ukraine in 2018 to investigate conflicts by Biden and his son, Hunter Biden, related to Burisma Holdings, a Ukrainian energy company widely described as corrupt.

Parnas and Fruman were also in Ukraine to find information to counter findings in special counsel Robert Mueller’s investigation of possible cooperation between the Trump campaign and Moscow to influence the 2016 presidential election.

Giuliani, also a former federal prosecutor in New York, acted as the president’s personal attorney during the Mueller probe.

The investigation eventually determined that Russians interfered in the election campaign, but found no evidence that either Trump or his campaign conspired with them.

The White House dismissed what Parnas had to say on MSNBC.

“These allegations are being made by a man who is currently out on bail for federal crimes and is desperate to reduce his exposure to prison,” White House press secretary Stephanie Grisham said in a formal statement Thursday.

A federal grand jury in the Southern District of New York indicted Parnas and Fruman on charges of making $325,000 in illegal campaign donations to a pro-Trump political action committee.

Prosecutors say the two men tried to hide the source of the donations while working with foreign nationals who had “Russian roots” to send money into Nevada politics.

Parnas and Fruman also are charged with trying to lobby members of Congress on behalf of the Ukrainian government.

They were arrested and taken into custody at Dulles International Airport near Washington, D.C., while holding one-way tickets to exit the country.

The arrests came after the two were called to appear before three House committees in the early portion of the Trump impeachment inquiry that was held behind closed doors.

Regarding the charges against him, Parnas was quoted as saying: “We didn’t have the right accounts opened up. I had no ideas of the rules and regulations. I made it very clear [to the super PAC] the donation was from Global Energy Producers.”

Global Energy Producers is a company started by Parnas and Fruman.

In the early 1990s, Parnas worked at Kings Highway Realty in Brooklyn and sold housing for the Trump Organization, the Trump family’s business in New York.

Parnas left New York in 1995 for Florida, where he worked for several real estate companies before starting his own company, Parnas Holdings. He eventually went into business with Fruman, who reportedly was born in 1966.

The two men established a limited liability company, Global Energy Producers, which prosecutors allege was for purposes of concealing the source of their campaign contributions.

The Miami Herald reported that Parnas left a “long trail of debts in Florida and beyond.” He reportedly was sued numerous times for unpaid debts and was evicted from several properties.

One litigant told the Miami newspaper that Parnas was a “con man.”

The Washington law firm run by Joseph diGenova and Victoria Toensing hired Parnas in July 2019 as an interpreter in its representation of Ukrainian oligarch Dmytro Firtash, who was charged by the United States in a 2014 corruption case and was being held in Vienna. Firtash’s lawyer paid $1 million to Parnas.

Two others indicted in the alleged scheme were David Correia of Florida and Andrey Kukushkin of California, who established an insurance company with Parnas in Boca Raton, Florida, called Fraud Guarantee.

Parnas reportedly selected the name to clean up his Google search results, which consistently included the word “fraud.”

The National Legal and Policy Center, a conservative watchdog group based in Falls Church, Virginia, looked into some of the information Parnas promoted and determined that he was “disreputable,” said Tom Anderson, director of the center’s Government Integrity Project.

Well before his airport arrest, Anderson said, he warned other reporters to ignore information from Parnas.

“If the Democrats take anything from him, they will end up getting burnt,” Anderson told The Daily Signal. “We’ve never used any information from him. I’m surprised Democrats are going anywhere near him.”

House Democrats, ahead of sending the two articles of impeachment Wednesday to the Senate, released copies of text messages between Parnas and Robert Hyde, a former Republican candidate for the House from Connecticut.

The messages appear to say that former U.S. Ambassador to Ukraine Marie Yovanovitch—who Trump recalled from her post last year—had been under surveillance.

Yovanovitch, who testified during House impeachment hearings,  remains employed by the State Department with no change in pay.

A screenshot of a handwritten note to Giuliani that Parnas provided to House Democrats said the priority was to “get Zalensky [sic] to announce that the Biden case will be investigated.”