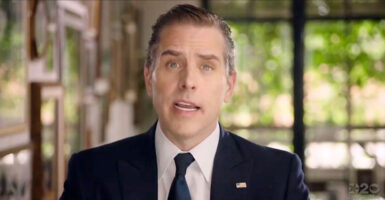 "I am confident that a professional and objective review of these matters will demonstrate that I handled my affairs legally and appropriately," says Hunter Biden, pictured Aug. 20 addressing the virtual Democratic National Convention that nominated his father, Joe Biden, for president. (Photo: Handout/Democratic National Committee/ Getty Images)

“I learned yesterday for the first time that the U.S. Attorney’s Office in Delaware advised my legal counsel, also yesterday, that they are investigating my tax affairs,” Biden said in the statement.

“I take this matter very seriously but I am confident that a professional and objective review of these matters will demonstrate that I handled my affairs legally and appropriately, including with the benefit of professional tax advisors.”

A source familiar with the investigation told The Daily Caller News Foundation that it began in 2018, which would have been months before Joe Biden launched his presidential campaign.

CNN reported that the probe centers on Biden’s business dealings in China.

The transition team issued a statement saying that Biden “is deeply proud of his son, who has fought through difficult challenges, including the vicious personal attacks of recent months, only to emerge stronger.”

Hunter Biden, 50, has come under scrutiny over his business dealings in China and Ukraine.

The Daily Caller News Foundation reported last year that the IRS placed a $112,000 tax lien against Biden’s property in 2015 over unpaid taxes.

A report released Sept. 23 by the Senate Finance and Senate Homeland Security committees detailed millions of dollars in wire payments from foreign companies to Hunter Biden and his business partners that were flagged for possible criminal activity.

The Republicans who released the report said that the payments posed “criminal financial, counterintelligence and extortion concerns.”

The owner of a computer repair shop in Wilmington, Delaware, released documents in September that he said were from a laptop that Biden dropped off at his business in April 2019. A copy of the laptop’s hard drive includes thousands of Biden’s personal and business emails.

The shop owner, John Paul Mac Isaac, told media outlets that he provided the laptop to the FBI and the U.S. Attorney’s Office in Delaware in December 2019. He provided a copy to Trump lawyer Rudy Giuliani nine months later, in September 2020.

A former business partner of Biden’s, Tony Bobulinski, also released a trove of emails and text messages he exchanged with Hunter Biden in 2017 as they were pursuing a deal with CEFC.

Bobulinski said in interviews that FBI agents questioned him Oct. 29 in Washington regarding Hunter Biden and the prospective deal with CEFC.

Biden’s lawyer did not respond to a request for comment.

This report has been updated since first published. Content created by The Daily Caller News Foundation is available without charge to any eligible news publisher that can provide a large audience. For licensing opportunities for this original content, email licensing@dailycallernewsfoundation.org.