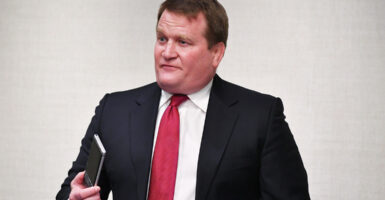 Tony Bobulinski, former business partner to Hunter Biden, says FBI agents asked him about his work with “the Biden family, [Chinese energy conglomerate] CEFC, and other operations around the world involving other countries.” Pictured: Bobulinski speaks Oct. 22 to reporters at a hotel in Nashville, Tennessee, before the second and final presidential debate in that city. (Photo: Mandel Ngan/AFP/Getty Images)

FBI agents told him in the Oct. 23 interview that he was a material witness in their investigation, Bobulinski told a reporter for Sinclair Broadcasting Group on Thursday.

The FBI has not said whether it is conducting any investigations related to Hunter Biden; his father Joe Biden; and the former vice president’s brother, James Biden.

Bobulinski said FBI agents asked him about his work with “the Biden family, CEFC, and other operations around the world involving other countries.”

CEFC is a Chinese energy conglomerate with links to China’s communist regime that paid Hunter Biden at least $5 million in 2017.

“It was a very cooperative deep dive,” Bobulinski said of his FBI interview in the interview with Sinclair’s Rosen.

In May 2017, Bobulinski and two other businessmen partnered with Hunter Biden and James Biden to form a company called SinoHawk.

The initial plan for the partnership was to invest $10 million from CEFC in various energy and infrastructure projects in the U.S. and other countries.

The SinoHawk-CEFC joint venture fizzled out by August 2017, but Hunter and James Biden continued doing business with the Chinese conglomerate.

Bobulinski came forward last week with what he said were details about the business deal with the Bidens and CEFC. He said he did not know that the Chinese conglomerate paid the Bidens until he read it in the Senate report.

Bobulinski provided a trove of emails, text messages, and business records related to his dealings with the Bidens to the FBI and the Senate Homeland Security Committee.

One of the documents shows that Hunter Biden arranged a meeting for Bobulinski with Joe Biden in Los Angeles on May 2, 2017. Bobulinski said at a press conference last week that they discussed the Biden family’s plans for doing business in China.

He said that Joe Biden’s denials were “false,” and that he had “firsthand knowledge about this because I directly dealt with the Biden family, including Joe Biden.”

Bobulinski also has said that Joe Biden was referenced as “the big guy” in an email laying out equity stakes for the partners in the joint venture.

The Biden campaign has said that Joe Biden never held equity in his son’s companies.