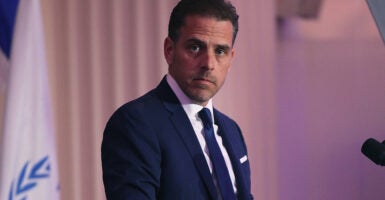 Hunter Biden suggested setting up a shell company to do business with a Chinese firm to avoid registering as a foreign agent and be able to bid on U.S. government contracts, according to documents from May 2017 obtained by The Daily Caller News Foundation.

A day after sending the message, Biden arranged a meeting between his father, former Vice President Joe Biden, and Tony Bobulinski, one of the prospective partners in a deal with CEFC China Energy, a Chinese conglomerate whose chairman had links to the communist regime in Beijing.

“We don’t want to have to register as foreign agents under the FCPA, which is much more expansive than people who should know choose not to know,” Hunter Biden wrote to Bobulinski on May 1, 2017, according to a text message obtained by The Daily Caller News Foundation.

“No matter what it will need to be a US company at some level in order for us to make bids on federal and state funded projects,” the former vice president’s son wrote.

Biden appeared to be referring to the Foreign Corrupt Practices Act as well as the Foreign Agents Registration Act.

Biden did not explain in the messages why he thought the venture with CEFC would violate either U.S. law without the buffer of a U.S. shell company.

Ye had also been an officer in the 2000s for a group controlled by the Chinese Communist Party, according to the Senate report.

‘I Have Firsthand Knowledge’

On May 2, 2017, a day after the text message, Hunter Biden arranged a meeting among Bobulinski, James Biden, and Joe Biden in Los Angeles.

Bobulinski said at a press conference Thursday that the meeting lasted an hour. He also said that the meeting undercut Joe Biden’s past claims to have never discussed business with his son.

“That is false,” Bobulinski said of those previous statements.

“I have firsthand knowledge about this because I directly dealt with the Biden family, including Joe Biden,” he said.

Bobulinski said that during the May 2017 meeting, he and the Bidens discussed “the Bidens’ family business plans with the Chinese.”

He said Joe Biden was “plainly familiar” with those plans “at a high level.”

Text messages preserved by Bobulinski show him discussing the meeting with both Hunter and James Biden, the former vice president’s brother.

Bobulinski has provided emails, text messages, and business records related to the CEFC deal to the Senate Homeland Security Committee. He met Friday with the FBI, according to Sen. Ron Johnson, R-Wis., who chairs the committee.

Documents from the Bobulinski trove show that Oneida Holdings was formed on May 22, 2017, three weeks after Hunter Biden proposed using a U.S. company to do business with the Chinese conglomerate.

According to Bobulinski, CEFC was expected to fund the partnership with SinoHawk using $10 million in seed money to begin investing in infrastructure and technology companies.

Bobulinski said Thursday that the Chinese conglomerate never followed through with the investment. Emails and text messages from Bobulinski show him hounding its executives about the delayed wire transfer.

Hunter and James Biden ended up working with CEFC, though Bobulinski said Thursday that he was unaware of the side deal.

In the Aug. 3, 2017, email, Bobulinski provided a letter responding to a list of questions from CEFC about the joint venture with SinoHawk. One question was about a $5 million interest-free loan the Chinese conglomerate was making to the Biden family.

The next day, without Bobulinski’s knowledge, the conglomerate made the first in a series of wire transfers to a law firm for Hunter Biden.

The report also says that the wire payment “was identified for potential criminal financial activity.”

‘You and HB Were Lying’

On Aug. 8, 2017, according to the Senate report, the CEFC affiliate wired $5 million to a bank account for a shell company called Hudson West III.

That shell company, which Hunter Biden co-owned with an associate of Ye Jianming, would end up wiring $4.8 million to the law firm through Sept. 25, 2018, according to the report.

Hunter and James Biden also tapped into a $100,000 line of credit linked to Hudson West III and CEFC, the Senate report said.

Bobulinski confronted James Biden about revelations in the Senate report, according to his records.

“You can imagine my shock when reading the report yesterday put out by the Senate committee,” Bobulinski wrote Sept. 24.

“The fact that you and HB were lying to Rob, James and I while accepting $5 million from CeFc is infuriating,” Bobulinksi wrote.

“And so disappointing based on the years of work that James, Rob and team invested to get things done,” he continued, referring to James Gilliar and Rob Walker, the two other SinoHawk partners.

Other documents from Bobulinski raise questions about whether Joe Biden was a passive investor in the CEFC partnership.

A May 13, 2017 email written by Gilliar, the SinoHawk partner, makes reference to a 10% equity stake that Hunter Biden would hold for “the big guy.”

Bobulinski said Thursday that “the big guy” is Joe Biden, and that Hunter Biden often referred to his father by that term.

Joe Biden never was listed on any business records for SinoHawk or Oneida Holdings, though messages from the Bobulinski trove show that the partners discussed keeping Joe Biden’s name hidden during business discussions.

“Don’t mention Joe being involved, it’s only when u are face to face, I know u know that but they are paranoid,” Gilliar told Bobulinski in a text message on May 20, 2017.

“They should be paranoid about things,” Bobulinski replied.

The Biden campaign denied in a statement Thursday that Joe Biden ever invested in his son’s companies.

“Joe Biden has never even considered being involved in business with his family, nor in any overseas business whatsoever. He has never held stock in any such business arrangements nor has any family member or any other person ever held stock for him,” spokesman Andrew Bates said in a prepared statement to The Wall Street Journal.

The campaign did not address questions about Biden’s meeting with Bobulinski, according to The Journal.

A lawyer for Hunter Biden did not respond to a request for comment.