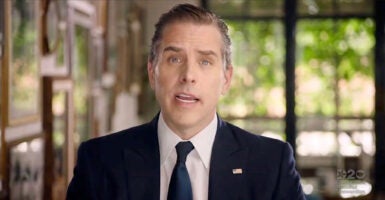 The president of The Heritage Foundation is calling on the CEOs of Facebook and Twitter to be forthright on their platforms and is condemning the social media giants’ suppression of news stories on Hunter Biden’s business dealings.

“I write to you to join tens of millions of Americans in expressing our outrage concerning your handling of the New York Post’s recent reporting on [former] Vice President Biden and his son, Hunter,” Kay C. James, president of The Heritage Foundation, said in letters Thursday to Jack Dorsey, Twitter’s CEO, and Mark Zuckerberg, his counterpart at Facebook.

“To put it bluntly, you have squandered the public trust and are now inflicting great harm on the nation and its institutions by inappropriately influencing our electoral politics. Regardless of anyone’s political views, your platform’s suppression of a major news story from a reputable news outlet is highly problematic,” James wrote in the letters to Dorsey and Zuckerberg.

The New York Post’s article reportedly received more than 300,000 shares on Facebook, and posts having a link to the story have received 1.5 million interactions, Business Insider reported.

“The Heritage Foundation understands Twitter has rules and that these rules are intended to protect users, to prevent the spread of false information and foreign propaganda, and to otherwise provide a safe user experience,” James wrote in the letter to Dorsey, adding:

But we also believe that you have politicized these rules and that you have failed to apply them in a fair and equitable manner, which has collapsed public trust in your platform and is now impacting the American electoral process.

In the letter, James highlighted a survey, pointing out that “more than 40% of Americans believe technology companies support liberals over conservatives, and 72% think it is likely that ‘social media platforms actively censor political views that those companies find objectionable.’”

James wrote to Zuckerberg that The Heritage Foundation recognizes the “community standards” of the social media platform, but that the company hasn’t been fair in its implementation of the policy. She criticized politicization of the standards and the “fact-checking” process, saying that, as with Twitter, Facebook has sacrificed the public’s trust in the platform and is improperly influencing the country’s electoral process.

“You and your company play a central role in American life and, specifically, in this nation’s political dialogue,” James said, adding:

Yet your continued failure to fairly follow your own self-imposed standards erodes any credible defense of your actions. It is now time for you to step up to meet the responsibilities you have worked so hard to secure.