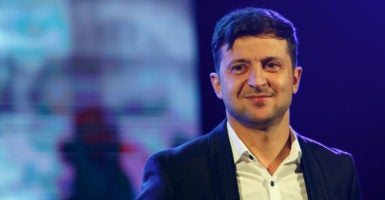 Volodymyr Zelensky won Ukraine’s presidential election by a landslide on Sunday. Zelensky is a political outsider who plays the role of Ukrainian president in a popular Ukrainian TV show, “Servant of the People.” (Photo: Sergiy Gudak/AFP/Getty Images)

“I promise I will never let any of you down,” Zelensky said during a Sunday night victory speech.

Sunday’s runoff election followed a first round vote in March, in which incumbent President Petro Poroshenko and Zelensky emerged as the two front-runners from a crowded field of dozens of other candidates.

With exit polls forecasting his decisive victory on Sunday night, Zelensky’s campaign headquarters in Kyiv erupted in celebration. The newly minted president-elect promised to shake up Ukraine’s government and declared that his victory would unite Ukrainians.

By Monday afternoon, election officials reported the 41-year-old Zelensky had received 73.2% of the runoff vote, with about 97% of votes counted. For his part, Poroshenko, who took just 24.5% the vote, conceded defeat on Sunday and pledged to support the new president.

Zelensky is a political outsider who plays the role of Ukrainian president in a popular Ukrainian TV show, “Servant of the People,” which is now streaming on Netflix.

Poroshenko, on the other hand, is a fixture of Ukraine’s post-Soviet political establishment. He entered political life in 1998 as a member of parliament and rose through the ranks to become the country’s secretary of the National Security and Defense Council, and minister of foreign affairs, before the assuming the presidency in June 2014.

In his concession speech, Poroshenko said he would not quit politics.

“I will keep fighting for Ukraine,” the outgoing president said.

More than five years after Ukraine’s pro-European, 2014 revolution, and with a Russian-orchestrated war ongoing in the country’s east, Zelensky’s resounding election victory proves the country’s voters are willing to gamble on leaders outside the pre-revolutionary political caste—even in such uncertain times.

“The problem is that the authorities have lost all their credit of trust, and [Zelensky] has used it to his advantage,” said Bogdan Fedyn, a 24-year-old war veteran who participated in the 2014 revolution.

“Unfortunately, the authorities have led people to such a disappointment, that they have made such a decision,” Fedyn said.

“The main thing we should wish the new Ukrainian leadership is sanity,” Russian Prime Minister Dmitry Medvedev wrote Sunday on Facebook. “And, of course, an understanding of the deep value of relations between the peoples of our countries, which should be above the political situation.”

Zelensky’s inauguration is scheduled for May 28.

Ukraine’s Central Election Commission said Sunday’s voter turnout was around 62% and reported that the number of appeals and complaints about the voting process was “much lower” than the first round vote on March 31.

“Allow us to express our appreciation for the strong attachment to democracy and the rule of law that the people of Ukraine have demonstrated throughout the electoral process. This is a major achievement in the complex political, economic and security environment, against the backdrop of continuous challenges to Ukraine’s territorial integrity,” President of the European Council Donald Tusk and President of the European Commission Jean-Claude Juncker wrote in a joint letter to Zelensky.

The peaceful transfer of power after a fair election highlights how far Ukraine’s post-revolutionary democracy has come since pro-European protesters braved snipers on Kyiv’s central square, the Maidan, during the February 2014 revolution to overthrow the country’s pro-Russian president, Viktor Yanukovych.

“I want to say to all the post-Soviet countries who watch us closely: Everything is possible,” Zelensky said Sunday.

In the months following Yanukovych’s 2014 ouster, Russia invaded and seized Ukraine’s Crimean Peninsula and launched a war in the country’s eastern Donbas region.

After more than five years of constant combat, Ukrainian troops remain deployed along an entrenched front line in the Donbas where they face a combined force of pro-Russian separatists, foreign mercenaries, and Russian regulars.

To date, the war has killed more than 13,000 Ukrainians and displaced 1.7 million people from their homes. Europe’s only ongoing land war is also the Continent’s biggest humanitarian crisis.

Polling shows that a majority of Ukrainians see the war as the most important issue for their country as a whole. Yet, when it comes to their personal lives, inflation is Ukrainians’ top concern by a long shot.

The combined effects of revolution and war dealt Ukraine an economic body blow in 2014 from which it has not yet recovered. The country’s overall gross domestic product reduced by roughly half from 2013 to 2015, and the national currency, the hryvnia, remains about one-third its pre-war value against the dollar.

Despite facing a docket full of crises since he took office, Poroshenko has delivered on slow but steady progress.

Since 2014, anti-corruption reforms have haltingly progressed, Ukrainians have gained visa-free travel to the EU, and the country’s newly unified, national Orthodox Church achieved independence from Russian control for the first time since the 17th century.

Under Poroshenko’s watch, Ukraine’s overall GDP has regained ground, climbing back to about $124 billion—roughly two-thirds the country’s pre-war GDP of $183.3 billion in 2013.

Also, Ukraine rebuilt its military from a dilapidated force into the second-largest standing army in Europe in terms of manpower.

Yet, many Ukrainians are disappointed in the pace of their country’s post-revolutionary development. Since July 2015, the share of Ukrainians who believe their country is heading in the wrong direction has hovered around 70%, according to a December 2018 report by the International Republican Institute, a U.S. think tank.

Many Ukrainians who are frustrated with the slow pace of change want to see a new generation of leaders take power in Kyiv.

Sergiy Horbenko, whose 19-year-old son, Sviatoslav, died in combat in eastern Ukraine in October 2014, said Poroshenko didn’t take a hard enough stance against Russia. Particularly, Horbenko chafed at the amount of trade that continued between Russia and Ukraine despite the de facto state of war that exists between the two erstwhile Soviet allies.

“I’m 100% convinced that Poroshenko was disguised as a Ukrainian patriot,” Horbenko said. “He deceived everyone.”

As for Zelensky, Horbenko was cautiously optimistic even if he expressed misgivings about the incoming president’s lack of clear policy proposals.

“What kind of president will Zelensky be? I do not know, I’m anxious. But he is definitely not a stupid person, and we all hope for all the same positive changes,” Horbenko said. “I think strategically nothing will change—Ukraine will try to defend its independence and its Western choice.”

Zelensky campaigned on an anti-corruption platform while also pledging to maintain Ukraine’s pro-European vector and resolve the ongoing war in the Donbas. Yet, Zelensky’s campaign platform was consistently short on specifics on how to make good on those promises.

“For me, it is a terrible choice,” Anatolii Stepanov, a 49-year-old photographer who lives in Kyiv, said of Zelensky’s victory.

“Poroshenko is not an ideal president, but he had a clear and firm position on the break with Russia,” Stepanov said. “I knew and know that Russia is the enemy. Zelensky was a virtual candidate. He did not make a single clear promise, did not mark out one firm position. I think that it will take several months before people will begin to change their understanding of Zelensky.”

Many of Zelensky’s critics also have misgivings about his alleged ties to the controversial Ukrainian oligarch, Ihor Kolomoisky.

In December 2016, Ukraine’s central bank nationalized PrivatBank amid charges that Kolomoisky had committed fraud. Kolomoisky, who now lives in Tel Aviv, is currently embroiled in a court battle to regain control of PrivatBank.

Zelensky, for his part, has denied claims that he’s indebted to Kolomoisky in any sort of quid pro quo political relationship.

The big question going forward is whether Zelensky and his administration will have the executive chops to turn their populist promises into action. Less than 24 hours after the election, however, some Ukrainians said Zelensky’s representatives were already tempering expectations of progress on hot-button issues like ending the war and improving the economy.

“Very soon we will have a lot of very angry and dissatisfied people in our country— those who did not support Zelensky at all, and those who will be angry because he is unable to fulfill people’s expectations,” said Alexandra Alyoshina, a 34-year-old public relations professional in Kyiv.

“The situation could turn out to be quite revolutionary, which is very disturbing, especially in time of war,” Alyoshina added. “That’s why I am quite pessimistic about a Zelensky presidency.”