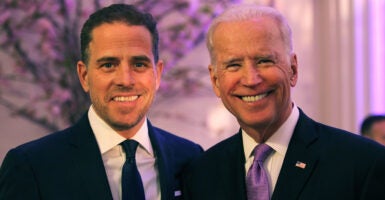 The U.S. attorney looking into Hunter Biden doesn’t have a particularly partisan past, having worked as a career prosecutor and in private practice. Pictured: Hunter Biden and his father, then-Vice President Joe Biden, attend the World Food Program USA's annual McGovern-Dole Leadership Award ceremony on April 12, 2016, at the Organization of American States in Washington. (Photo: Teresa Kroeger/Getty Images)

The Justice Department’s investigation of Hunter Biden’s financial dealings is being led by a federal prosecutor who was appointed by President Donald Trump with the endorsement of two Democratic senators.

Former Vice President Joe Biden’s son announced Wednesday that he had just learned he is under investigation by the U.S. Attorney’s Office in Delaware for tax-related issues.

Should Joe Biden become president Jan. 20, it’s not clear what the future holds for Weiss, since most incoming administrations appoint new U.S. attorneys.

Weiss, 64, doesn’t have a particularly partisan past, however, having previously worked as a career prosecutor and in private practice.

Weiss, though appointed for a term of four years, took office in February 2018. So, he presumably either would have to resign or be fired to kill the investigation.

Here are four things to know about Weiss.

On Dec. 1, 2017, near the end of his first year in office, Trump nominated Weiss as U.S. attorney for the district of Delaware. He had been serving as acting U.S. attorney in the state.

The nomination wasn’t controversial, and the Senate confirmed Weiss’ nomination by voice vote on Feb. 15, 2018.

Weiss, a graduate of Washington University in St. Louis and Widener University Delaware School of Law, was sworn in seven days later to a four-year term. He is a member of the Delaware and Pennsylvania bars.

Delaware’s two Democratic senators, Tom Carper and Chris Coons, announced their support for Weiss after playing a role in his selection by Trump.

“David Weiss is an excellent choice,” Carper said after Trump announced his intent to nominate Weiss in November 2017.

“During his combined 16 years in the U.S. Attorney’s Office, he has prosecuted corruption, money laundering, drug offenses, mail and wire fraud, and he spearheaded the successful effort to establish New Castle County as a High Intensity Drug Trafficking Area,” Carper, the state’s senior senator, said. “He is highly respected in the law enforcement community, and I hope we can swiftly confirm him in the Senate.”

Carper was Delaware’s junior senator when Joe Biden represented the state until Barack Obama selected him as his running mate in 2008.

“David is a career prosecutor and dedicated public servant, longtime Delawarean, and valued member of our law enforcement community,” said Coons, a member of the Senate Judiciary Committee. “I want to thank the White House for working with Senator Carper and me to present an excellent nominee for U.S. Attorney.”

Upon graduation from law school, Weiss began his legal career in 1984 as a clerk for Delaware Supreme Court Justice Andrew D. Christie.

Weiss next became an assistant U.S. attorney in Delaware from 1986 through 1989.

In 1989, Weiss went into private practice at the law firm of Duane Morris. He became a partner there in 1993, practicing in the firm’s commercial litigation department.

He returned to the U.S. Attorney’s Office in Delaware in 2007 to serve as first assistant U.S. attorney, the top career prosecutor position. He held the role until 2009, then returned to it in 2012 after serving as acting U.S. attorney from 2009 through 2011.

After Trump took office in January 2017, Weiss again served as acting U.S. attorney until his nomination for the job.

It’s not clear what Weiss’ office is investigating about Hunter Biden at this point.

“Per DOJ policy, we cannot comment on an ongoing investigation,” Weiss spokeswoman Kim Reeves told The Daily Signal in an email.

In his statement Wednesday, Biden said only that the probe is related to his taxes. The investigation began in 2018 and also is scrutinizing his Chinese business dealings and other transactions, The Associated Press reported.

CNN reported that the investigation “had gone covert” during the presidential campaign, adding: “Now that the election is over, the investigation is entering a new phase” as the FBI and the IRS issue subpoenas and seek interviews.

Hunter Biden’s association with the Chinese communist government and Chinese businesses became an issue late in the presidential campaign, although many Americans did not learn of it because of a widespread media blackout of the story.

In a statement Wednesday released through his father’s transition team, Hunter Biden said:

I learned yesterday for the first time that the U.S. Attorney’s Office in Delaware advised my legal counsel, also yesterday, that they are investigating my tax affairs. I take this matter very seriously but I am confident that a professional and objective review of these matters will demonstrate that I handled my affairs legally and appropriately, including with the benefit of professional tax advisors.

The Biden transition team said the former vice president “is deeply proud of his son, who has fought through difficult challenges, including the vicious personal attacks of recent months, only to emerge stronger.”