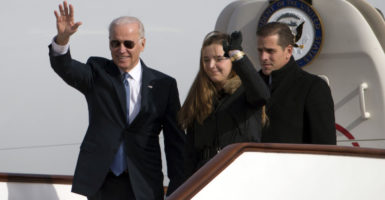 A Senate committee is poised to issue a subpoena for documents as part of an investigation of the Ukrainian dealings of former Vice President Joe Biden and his son Hunter Biden.

The subpoena by the Senate Homeland Security and Governmental Affairs Committee almost certainly will move forward, as a spokeswoman for Sen. Mitt Romney said the Utah Republican is now on board after giving mixed signals on how he would vote.

“It is not our fault that Joe Biden and Hunter Biden got wrapped up in the whole Ukrainian story. But we’re not closing our eyes to this,” committee Chairman Ron Johnson, R-Wis., told Fox News Channel.

While Biden was President Barack Obama’s point man on policy toward Ukraine, his son was tapped for a seat on the board of Burisma Holdings, a major Ukrainian energy concern. Hunter Biden kept that board seat until last year, reportedly making more than $50,000 a month.

Joe Biden boasted in public in 2018 that he pressured the Ukrainian government to fire a state prosecutor who reportedly was investigating corruption at Burisma by threatening to withhold about $1 billion in U.S. aid.

When asked last year about the appearance of a conflict of interest, Biden said: “Everybody looked at this, and everybody’s looked at it and said there’s nothing there.”

The Homeland Security and Governmental Affairs Committee, the Senate’s primary oversight panel, is scheduled to vote Wednesday on subpoenaing Andrii Telizhenko, a former consultant with Blue Star Strategies and former staffer at the Ukrainian Embassy in Washington.

The committee has investigated the Biden-Ukraine connection since November.

“What I’m hoping to be able to do within the next couple of months is gather enough information, verify it through things like this subpoena, and then issue at least an interim report so the American people can see what this possible corruption is,” Johnson, R-Wis., said in an interview last week with Fox News Channel’s Martha MacCallum.

Peters objected to the idea, and in a Feb. 27 letter argued that the investigation “could be used to further disinformation efforts by Russians or other actors.”

Republicans have an 8-6 majority on the committee, but Romney had sent mixed signals on how he would vote.

“There’s no question that looking into Burisma and Hunter Biden looks political,” Romney, the lone Republican to vote to remove Trump from office in the Senate impeachment trial, told reporters Thursday.

“I think people are tired of these political investigations and would hope that if there is something that needs to be evaluated it would be done by perhaps the FBI or some other agency that perhaps is not as political as a committee of our body.”

However, by Friday, Romney was backing a subpoena.

“Sen. Romney has expressed his concerns to Chairman Johnson, who has confirmed that any interview of the witness would occur in a closed setting without a hearing or public spectacle,” Romney spokeswoman Liz Johnson said in a written statement.

“He will therefore vote to let the chairman proceed.”

Although the Senate committee is considering an interview with Telizhenko, no finite timeline has been set because the matter remains entirely in the fact-gathering phase, according to committee staff.

Blue Star Strategies, where Telizhenko previously was employed, is an international consultancy firm with offices in Washington, Brussels, Buenos Aires, Paris, and Vienna. It works with corporations and political groups.

The firm was contracted by Burisma, the Ukrainian energy company.

Burisma reportedly paid Hunter Biden at least $50,000 per month for serving on its board of directors while his father, as vice president, was Obama’s point man for Ukrainian policy.

The Obama administration’s State Department had concerns about corruption at Ukrainian energy companies, and Blue Star reportedly was trying to change that perception.

Ron Johnson said that documents obtained by the committee raise suspicions about the circumstances of the dismissal of Ukrainian Prosecutor General Viktor Shokin.

In 2016, as vice president, Biden threatened Ukrainian officials that the U.S. would withhold $1 billion in aid unless the government fired Shokin.

Several State Department officials have contended that Shokin was not prosecuting corruption cases, and that, separate and apart from Burisma, U.S. officials supported his ouster.

“There is a document, supposedly contemporaneous, that said that the contact by Blue Star to the prosecutor general’s office was all about apologizing for the misinformation campaign conducted against Shokin,” Johnson said, referring to a public relations effort to spread misinformation about the top prosecutor to the United States government.

Johnson also said he didn’t see why anyone would object to obtaining relevant records.

Johsnon said his committee is trying to piece together a timeline, through documents, to address unanswered questions.

Speaking to an audience of foreign policy experts in early 2018, Biden recounted how, during a trip to Ukraine as vice president in March 2016, he threatened to withhold the $1 billion in U.S. aid if Ukraine’s government did not fire Shokin.

The Democrat-controlled House impeached President Donald Trump on Dec. 18 for mentioning the Bidens and their potential conflicts in a July 25 phone call with recently elected Ukrainian President Volodymyr Zelenskyy.

On Feb. 5, the Republican-controlled Senate acquitted Trump of charges of abuse of power and obstruction of Congress.

The Senate committee’s subpoena of Telizhenko would be for documents rather than testimony. The subpoena almost would be a formality, as Telizhenko has said he is willing to cooperate with Senate investigators.

However, Telizhenko can’t legally violate a nondisclosure agreement with Blue Star unless he is subpoenaed.

Telizhenko, who had been a low-level staffer at the Ukrainian Embassy in Washington, now works as a consultant in Kyiv, the capital of Ukraine, where Burisma also is headquartered.

Telizhenko reportedly has said that Oksana Shulyar, a top aide to Ukraine’s former ambassador to the U.S., Valeriy Chaly, suggested Telizhenko should assist in Ukrainian efforts to meddle in the 2016 election in opposition to Trump’s candidacy.