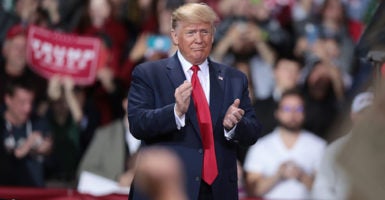 The Democrat-controlled House voted Wednesday night to approve two articles of impeachment against President Donald Trump after about 10 hours of debate.

In two historic votes largely along party lines, the House charged Trump with abusing his power by a vote of 229 to 197 and obstructing Congress by a vote of 228 to 198.

Rep. Justin Amash of Michigan, elected as a Republican but recently turned independent, voted for both articles of impeachment.

Two Democrats, Reps. Collin Peterson of Minnesota and Jeff Van Drew of New Jersey, voted “no” on both articles of impeachment. Van Drew indicated over the weekend that he plans to become a Republican.

A third Democrat, Rep. Jared Golden of Maine, voted “no” on the charge of obstructing Congress.

“Taken together, the two articles charge that President Trump placed his private, political interest above our national security, above our elections, and above our system of checks and balances,” Rep. Jerry Nadler, D-N.Y., chairman of the House Judiciary Committee, said.

The outcome makes Trump the third president in American history to be impeached by the House of Representatives. President Andrew Johnson was the first in 1868 and President Bill Clinton became the second on Dec. 19, 1998, almost exactly 21 years ago.

Trump was speaking at a rally in Battle Creek, Michigan, as the vote on the first article of impeachment occurred, and cable news networks used a split screen to show both the president and the unfolding votes.

The rally was held in Amash’s congressional district.

“It doesn’t really feel like we’re being impeached,” Trump told the cheering crowd. “The country is doing better than ever before, [and] we did nothing wrong.”

The floor debate began after 9 a.m. and, as day turned into evening, House members from each side howled or applauded, depending on who was speaking. The votes concluded around 8:45 p.m.

Democrats based the charge of abuse of power on Trump’s July 25 phone conversation with Ukrainian President Volodymyr Zelenskyy, in which they allege Trump pressured Ukraine’s new leader to open an investigation into a political rival at a time when Trump was withholding nearly $400 million in congressionally approved military aid. Trump released the aid in September.

According to an official White House transcript, Trump expressed concern that Ukraine, years before Zelenskyy took office, meddled in the 2016 presidential election in the United States.

The two leaders also talked briefly about Trump’s interest in Ukraine’s investigating the activities of former Vice President Joe Biden’s son as a highly paid board member at the Ukrainian energy company Burisma while the senior Biden was President Barack Obama’s point man for Ukraine policy.

“President Trump should have been focused on the interest of the American people in that call,” Nadler said. “Instead, he prioritized his private, political interests.”

Democrats based their charge of obstruction of Congress on Trump’s direction that administration officials not respond to subpoenas for documents and testimony during the House impeachment inquiry.

“Many presidents, including President Trump, have asserted privilege and other objections to specific subpoenas,” Nadler said. “But only President Trump has ordered the categorical defiance of a congressional investigation, the automatic rejection of all subpoenas.”

The two articles of impeachment likely will go nowhere in a Senate trial, noted John Malcolm, director of the Meese Center for Legal and Judicial Studies at The Heritage Foundation.

“It is the culmination of an impeachment effort by House Democrats that began within days of Trump’s inauguration nearly three years ago. It all seems so anti-climactic,” Malcolm said in a written statement, adding of the coming Senate trial:

Assuming that all 45 Democrats and both independents vote to convict, they will still need at least 20 Republican senators to join them in order to remove Trump from office. This will not happen. … President Trump will not be unseated by this partisan ploy. While [the] vote in the House will, no doubt, anger the president, the ultimate verdict will be rendered by the people when they vote in November 2020.

It requires 67 senators, an unlikely two-thirds majority, to convict and remove a president after a Senate impeachment trial. Republicans hold 53 seats.

House Speaker Nancy Pelosi, D-Calif., told reporters earlier in the day that the House would consider withholding the articles of impeachment from the Senate. This move could stall the trial, providing some leverage to House Democrats on setting the rules.

During the House floor debate, Republican lawmakers argued that the articles of impeachment were vague and did not allege a specific crime.

“I not only serve on the Judiciary Committee, I also serve on the Rules Committee,” Rep. Debbie Lesko, R-Ariz., said. “I have spent hours and hours and hours reading transcripts, looking at documents, hearing testimony. I can tell you one thing: I believe this is the most unfair, politically biased, rigged process that I have seen in my entire life.”

“There is no proof, none, that the president has committed an impeachable offense,” Lesko added. “Not one of the Democrat witnesses, not one, was able to establish that the president committed bribery, treason, or high crimes and misdemeanors as required [for impeachment] in the U.S. Constitution.”

Lesko noted that 17 of the 24 Democrats on the House Judiciary Committee already had voted to back an impeachment resolution against Trump before the Trump-Zelenskyy phone call.

Five of the nine Democrats on the House Rules Committee also already had voted to impeach Trump, she said.

The Arizona Republican was referring to Reps. Al Green, D-Texas, and Brad Sherman, D-Calif., who used procedures to force three earlier votes on the House floor on whether to table Green’s resolution to impeach Trump. The most recent such resolution was in July.

Van Drew, Peterson, and Golden were the only Democrats to defect among the 31 who won election in 2018 in congressional districts won by Trump in 2016.

Rep. Elaine Luria of Virginia is among the “Trump district” Democrats. She invoked her military background, which helped her win election, in arguing for impeachment.

“I rise today in support of the oath I first took at 17 upon entering the Naval Academy and took five more times in my 20-year Navy career, an oath that comforted me in the years that I spent away from my family deployed around the globe,” Luria said, adding:  “And today, an oath that gives me resolve, resolve to do today what is right and not what is politically expedient, resolve to stand with the president at the White House last week and resolve to stand up to the president today.”

Majority Whip James Clyburn, D-S.C., the No. 3 Democrat in the House, appeared to use the words “domestic enemies” to refer to Trump and invoked religion in describing his vote.

“I rise today feeling the full weight of my duty as a member of this august body, reflecting upon our oath of office to support and defend the Constitution against all enemies, foreign and domestic,” Clyburn said.

“Today, we have a president who seems to believe he is a king or above the law,” Clyburn said. “Paine warned us that so unlimited a power can belong only to God Almighty. My faith leads me to take very seriously the final words of our oath, ‘to faithfully discharge the duties of the office, so help me God.’”

Pelosi had resisted impeachment for months, but said Wednesday that she had no choice. As she spoke, Pelosi stood by a prop, a sign that quoted from the Pledge of Allegiance: “And to the Republic for which it stands.”

“If we do not act now, we will be derelict in our duty,” Pelosi said. “It is tragic the president’s reckless actions make impeachment necessary. He gave us no choice.”

House Minority Leader Kevin McCarthy, R-Calif., gained applause from his caucus when he asserted about 7:45 p.m. that Trump easily would survive impeachment following a Senate trial.

Rep. Doug Collins, R-Ga., ranking member of the Judiciary Committee, noted the previous attempts to impeach Trump and referred to Green’s widely reported comment that Democrats needed to impeach Trump to keep him from getting reelected.

“That is probably the most prescient thing said by the majority in the last year, is, ‘We can’t beat him if we don’t impeach him.’ There is a reason behind this impeachment, and even Speaker Pelosi said it would be dangerous to leave it to voters to determine whether President Trump stays in office. Really?” Collins said, adding:

After we just said the Pledge of Allegiance, we go back to the speaker’s own words, who said it would be dangerous to leave it [Trump’s fate] to the voters. I will tell you right now, Madam Speaker, we on the Republican side have no problem taking our side to the [House] majority and to the people of this country because they elected Donald Trump, and it is a matter for the voters, not this House, not in this way, not in the way this is being done. It has trampled everything this House believes in.

Rep. Maxine Waters, D-Calif., who started what she called the “Impeach 45” movement in 2017, appeared to boast of a mission accomplished.

“History will remember those who were willing to speak truth to power. Yes, I called for Trump’s impeachment early,” Waters said, adding:

This is our country. Our foremothers and our forefathers shed their blood to build and defend this democracy. I refuse to have it undermined. I wholeheartedly support this resolution. I’m proud that in the final analysis, justice will have been served in America and Donald Trump will have been impeached.