Ukraine Cracks Down on Oligarchs and Volunteer Fighting Battalions 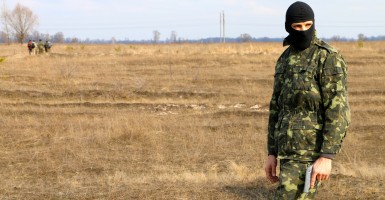 KYIV, Ukraine—In the course of one day last week, Ukraine’s government made several ambitious moves to centralize political and military control over the revolution- and war-torn country.

“The war is a very good curtain to hide the corruption,” says a reserve lieutenant in the Ukrainian army.

On the morning of March 25, Ihor Kolomoisky, one of Ukraine’s most powerful oligarchs and a financier of pro-Kyiv volunteer battalions, was forced to resign from a regional governorship. His dismissal came after he dispatched armed men to the Kyiv offices of two companies to protest parliamentary reforms targeting his business dealings. Hours later, in a separate incident, the head of Ukraine’s emergency services was handcuffed and arrested for corruption during a Cabinet meeting broadcasted live on national television.

That same day, in a push to centralize the country’s armed forces, the head of the Security Service of Ukraine (SBU) offered legal status to the country’s more than 30 volunteer battalions in exchange for accepting regular Ukrainian military or National Guard control. The units that refused were ordered off the battlefield.

“All those who do not want to do so must give up their weapons and select a different mode of behavior—leave the ATO [Anti-Terrorism Operation] zones, but more importantly, not create and not be a part of any illegal paramilitary groups,” SBU chief Valentin Nalivaichenko said to Interfax-Ukraine.

Kyiv’s recent moves highlight a renewed focus to double back on compromises it made out of battlefield necessity.

While the 2014 Maidan revolution successfully removed former Ukrainian President Viktor Yanukovych from power, it largely left Ukraine’s corrupt oligarchic system intact. Crises immediately following the revolution such as Russia’s annexation of Crimea and the conflict in Ukraine’s eastern territories temporarily put off public pressure to reform the oligarchy and weed out corruption among government officials. “The war is a very good curtain to hide the corruption,” Valeriy Krivchach, a reserve lieutenant in the Ukrainian army, said in an interview. “It is used as a blanket excuse to explain missing money.”

But with Ukraine’s economy on the brink of financial disaster—the country’s GDP shrank by 7 percent in 2014—and the war dragging on for its second year, Kyiv is under pressure to legitimize its authority. The country has had two revolutions since 2005, and disaffected Ukrainians speak openly about the possibility of a third.

“A lot of young people feel like nothing was accomplished by the revolution,” said Andrey Vergile, 22, a university student now living in Kyiv who fled the separatist stronghold of Donetsk last summer due to the war. “There’s still a lot of corruption and you see the oligarchs driving around in their Ferraris. But now a lot of young people have army training and weapons. The next Maidan could be much more violent.”

“We all, Ukrainians, are challenged by local corruption and inefficiency of weak post-Soviet state institutions,” Danylo Lubkivsky, adviser to the prime minister of Ukraine, said in a Kyiv press briefing.

“The government believes that these diseases and legacies must be jointly treated by our society—our churches, civil activists and public opinion leaders,” he added. “Moral integrity must be protected by all.”

According to Ivanna Klympush-Tsintsadze, head of the Ukrainian parliament’s permanent delegation to the NATO Parliamentary Assembly, rooting out corruption could be a way for Ukraine to secure foreign military aid to bolster its war effort, including lethal weapons from the United States.

“Once we launch comprehensive reforms of the military industrial complex, we will have more opportunities to get aid,” Klympush-Tsintsadze said at a press conference in Kyiv.

Kyiv is also trying to instill more order on the battlefield by tightening its grip on volunteer battalions, upon which the regular army leaned heavily in the early days of the conflict when it faced equipment shortages and overwhelming separatist firepower.

The armed civilian units played key roles in battles in the Luhansk and Donetsk areas, as well as in the defense of Mariupol. Funding for the volunteer battalions typically comes from wealthy donors, including Ukraine’s oligarchs, and online crowd-funding campaigns that draw heavily from contributions by the Ukrainian diaspora in the United States and Canada.

While Ukrainian officials did not suggest the simultaneous timing of Kolomoisky’s resignation with the push to reign in the volunteer battalions was deliberate, the two events highlight a persistent worry among Kyiv’s inner circles that Ukraine’s oligarchs could co-opt volunteer battalions—which are now heavily armed and battle hardened after a year of combat—as their own personal armies. According to the Kyiv Post, Kolomoisky had personally financed the Dnipro, Azov and Donbas battalions, all three of which are now under government control. However, Kolomoisky also has financial ties to the Right Sector, a volunteer battalion that has not yet submitted to government authority.

“They’re taking away our right to war,” said Artyom Lutask, chief of staff of the Right Sector’s 8th Independent Division, in response to Kyiv’s push to incorporate volunteer battalions into the regular army, according to the Kyiv Post. “Neutralizing the volunteer forces is betrayal.”

The group, which dates back to partisans in World War II who fought both Nazis and Soviets, has so far refused Kyiv’s orders to leave its positions on the battlefield around Mariupol.

“They want to fight, but they can’t do it this way,” said Oleg Sushinsky, a spokesman for the Ukrainian military, according to Ukrainian media sources. “There are civilians and then there are soldiers. If they consider themselves professionals, let them enroll officially.”