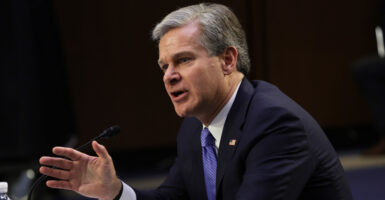 When asked specifically about the case of President Joe Biden’s son, Wray described it as an “ongoing investigation that I expect our folks to pursue aggressively.”

Sen. Charles Grassley, R-Iowa, ranking member of the Senate Judiciary Committee, raised the Hunter Biden issue early in the hearing by talking about efforts—reported by FBI whistleblowers—to close down an investigation into the president’s son ahead of the 2020 presidential election.

“In August 2020, the FBI supervisory intelligence analysts opened an assessment. This August 2020 assessment served as a vehicle by which the FBI headquarters team falsely labeled Hunter Biden information as you-know-what disinformation,” Grassley said, referring to partisan Democrats’ claim of Russian interference in the election.

“In October 2020, an avenue of reporting on Hunter Biden was ordered closed,” the Iowa Republican added. “That Hunter Biden information related to potential criminal activity. According to whistleblowers, the reporting was either verified or verifiable, via criminal search warrants. But it was shut down on the basis of it being at risk of disinformation.”

“I’m not asking about a case here. … If the FBI received information that foreign persons had evidence of improper or unlawful financial payments paid to elected officials or other politically exposed persons, would that pose a national security concern?” Grassley asked the FBI director.

Wray stressed that it would depend on the facts and circumstances of the individual case.

The hearing came a week after Grassley wrote a letter to Wray and his boss, Attorney General Merrick Garland, about reports from whistleblowers who reported on politicized efforts by the FBI to suppress a probe of Hunter Biden, and falsely characterize anything negative about the president’s son as “Russian disinformation.”

U.S. Attorney for Delaware David Weiss is leading an investigation into Hunter Biden’s foreign business deals, conducted both while his father was vice president and afterward. Federal prosecutors are looking at possible charges over taxes and lying to investigators, according to recent news reports.

“What steps should the FBI take to vet or more fully investigate evidence of improper or unlawful financial payment paid to elected officials and other politically exposed persons?” Grassley asked.

To date, the younger Biden has not been charged with anything.

During the question-and-answer session between Grassley and Wray, both seemed to support protecting whistleblowers.

“Do you agree that any retaliatory conduct against whistleblowers must be disciplined?” the Iowa lawmaker said.

Wray responded: “I think retaliatory conduct against whistleblowers is unacceptable. They serve a very, very important role in our system.”

After information about Hunter Biden’s foreign business activities in Ukraine, Russia, China, and other countries surfaced in 2019, two Senate committee chairmen at the time—Sen. Ron Johnson, R-Wis., on the Homeland Security and Governmental Affairs Committee and Grassley on Judiciary—opened an investigation in 2020.

“In August 2020, Sen. Johnson and I received an unsolicited and unnecessary briefing from the FBI. This briefing reportedly was related to our [Hunter] Biden investigation. In the end, the briefing had nothing to do with it,” Grassley said, adding:

The briefing was instituted after the FBI received pressure from my Democrat colleagues to do just that. The content of that briefing [was] later leaked in order to falsely paint the Grassley-Johnson investigation as advancing you-know-what Russian disinformation.

That briefing was held the very same month the FBI opened the assessment that was used to label Hunter Biden’s information as you-know-what disinformation. Considering the timing of events, the timing draws very serious concern. The FBI’s credibility is on the line.

By contrast, Grassley said, the FBI greenlighted a long investigation into then-President Donald Trump and “Russian collusion” with his presidential campaign based on scant evidence. Yet the bureau closed down a probe of Hunter Biden, he said.

Later in the hearing, Sen. Marsha Blackburn, R-Tenn., asked about the two cases.

“Americans look at what they perceive to be, and I think rightly so, a ton of money that was wasted on the Russia collusion investigation. So, do you agree that the allegation of secret collusion between President Trump and Russia was a hoax?”

Wray responded, “I don’t think that’s the terminology I would use.”

Blackburn then asked, “Do you agree that the Hunter Biden laptop was not Russia disinformation?”

Wray replied: “Now you are asking about an ongoing investigation that I expect our folks to pursue aggressively, and I can’t comment on that.”