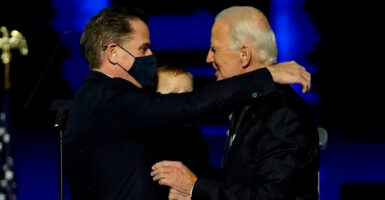 Sen. Chuck Grassley, R-Iowa, blasted Democrats and the “liberal media” in a speech on the Senate floor on Thursday, saying that both groups ignored his committee’s report regarding Hunter Biden’s suspicious business dealings, aspects of which were seemingly validated Wednesday when the president-elect’s son confirmed that he is under federal investigation.

“We showed our work and made our findings public, but the liberal media and Democrats chose to dismiss it. They even falsely claimed our work was Russian disinformation in order to protect the Bidens,” Grassley said in his speech.

He was referring to an investigation conducted by the Senate Finance and Senate Homeland Security committees into Hunter Biden’s business activities in Ukraine and China.

On Wednesday, Hunter Biden released a statement through his father’s presidential transition team saying that he was notified this week that he is the target of an investigation led by the U.S. Attorney’s Office in Delaware. Biden said that his “tax affairs” are under investigation.

A source familiar with the probe told The Daily Caller News Foundation that the investigation began in 2018, well before Joe Biden started his presidential campaign and before the Senate investigations of Hunter Biden.

The report showed that Biden and his business partners used a complex system of holding companies, shell companies, and law firms for consulting deals with companies in Ukraine and China, as well as with a Russian billionaire named Elena Baturina.

Most major media outlets censored coverage of another development in the Hunter Biden saga. Outlets such as CNN and NPR made editorial decisions not to cover aspects of a story first reported by the New York Post on Oct. 14 regarding emails from a laptop that purportedly belonged to Biden.

NPR announced Oct. 22 that it would not report about Biden’s laptop, saying that the organization did not “want to waste the listeners’ and readers’ time on stories that are just pure distractions.”

CNN’s political director, David Chailian, told employees during a conference call held the day of the Post report that the network would not be covering the Biden laptop story.

“Obviously, we’re not going with the New York Post story right now on Hunter Biden,” Chalian said during the conference call, which was recorded by the activist group Project Veritas.

Grassley and Johnson did not rely on information from the Biden laptop for their investigation, but many of the emails on the computer involved many of the business activities discussed in the Senate report.

CNN reported Wednesday that the Justice Department is scrutinizing Hunter Biden’s taxes and investigating him for possible money laundering related to business deals with Chinese companies.

One area of focus is Biden’s partnership with CEFC China Energy, a major energy conglomerate whose chairman had ties to the People’s Liberation Army.

CEFC wired $5 million to a firm linked to Hunter Biden beginning in August 2017. According to Grassley and Johnson’s report, U.S. regulators flagged some of the wire payments for possible criminal activity.

CEFC also paid the younger Biden $1 million for legal services for Patrick Ho, an executive at CEFC who was convicted in the U.S. for bribing African politicians to win mining contracts.

“It’s outrageous that the Fourth Estate would choose to ignore facts when they are uncovered by Republicans,” Grassley said.