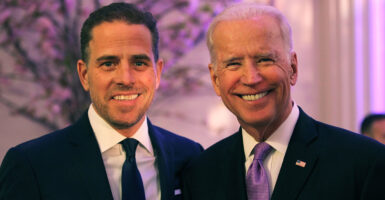 Nothing makes Washington elites clutch their pearls like the specter of “misinformation.”

“I make a special appeal to social media companies and media outlets: Please deal with the misinformation and disinformation that is on your shows,” President Joe Biden said in January, talking about the COVID-19 pandemic. “It has to stop.”

Yet when the “misinformation” benefits himself and his son, Hunter, Biden’s silence rivals that of a teen sneaking home after curfew.

But he’s not the only hypocrite in Washington.

A new revelation shows just what a sham the war on misinformation is.

Last week, 24 paragraphs into a news article about Hunter Biden, three New York Times reporters wrote of emails “obtained by The New York Times from a cache of files that appears to have come from a laptop abandoned by Mr. Biden in a Delaware repair shop.”

Then comes the money line: “The email and others in the cache were authenticated by people familiar with them and with the investigation.”

After all, if you can recall back to ye olde days of October 2020, believing the New York Post’s report about Hunter Biden’s laptop made you akin to someone who doubted the moon landing had ever happened.

Indeed, it was considered such a dangerous lie that Big Tech rushed to squelch any chance of Americans hearing about the story.

Twitter wouldn’t let users tweet out the link to the Post’s story—offering no explanation at first, and then arguing that the reporting could include private information and/or information obtained through hacking. (In a curious twist, Twitter never suppressed reporting about Donald Trump’s tax returns, which seem highly unlikely to have been obtained with Trump’s permission.)

Facebook also limited the reach of the Post’s article, saying it needed to be checked by fact-checkers first.

But now it appears all Big Tech managed to do was … censor the truth.

And of course, it wasn’t just Big Tech. The corporate media, which seemed curiously lacking in skepticism about the whole Trump-Russia collusion narrative, suddenly had skepticism enough to rival the Apostle Thomas when it came to the New York Post report on the content of the laptop abandoned by the future president’s son.

NPR, always a good value for our taxpayer dollars, was among those that didn’t deign to cover the story, saying it was impossible to confirm the Post’s reporting and well, even if it was true, it was irrelevant. (Funny how stories about Don Trump Jr. and Ivanka Trump were never irrelevant.)

“The [Hunter Biden laptop] story had been pushed by aides and allies of then-President Donald J. Trump who tried to persuade journalists that the hard drive’s contents would reveal the corruption of the father,” reported Ben Smith, then the media columnist at The New York Times.

“The news media’s handling of that narrative provides ‘an instructive case study on the power of social media and news organizations to mitigate media manipulation campaigns,’ according to the Shorenstein Center summary,” Smith added.

The Shorenstein Center did not respond to my email request for a copy of the study and clarification as to whether the study used reporting on Hunter Biden’s laptop as an example of misinformation.

Talk about the wrong takeaway.

Indeed, the relative silence about Hunter Biden’s laptop confirms that the left’s war on misinformation was never about making sure the truth got out. Instead, it’s simply a war on anything that hurts leftists’ goals—regardless of whether it’s true or not.

Biden’s January scolding of the media and tech companies over “misinformation” wasn’t his first rebuke.

In December, Biden fretted over the “dangerous misinformation on cable TV and social media.” Left unmentioned, of course, was the role that Anthony Fauci and other government “experts” had played in promoting misinformation about COVID-19.

And although Biden may be the most powerful person to air these concerns, he’s hardly alone. Facebook, Twitter, and other social media companies have been under constant pressure since the election of Trump in 2016 to combat “misinformation.”

But of course, the answer to fighting misinformation isn’t censorship—it’s spirited debate. If Twitter and Facebook had allowed the New York Post’s reporting on Hunter Biden to be distributed freely, plenty of journalists could have (and no doubt would have) publicly aired their concerns about the authenticity of the materials. The New York Post would have responded by sharing how it verified the material and why it believed it to be credible.

There would have been a real discussion—and as Americans cast their votes in October and November 2020, they would have had free access to a wide range of opinions about the story.

But it wasn’t to be. And based on the lack of any public reckoning from Twitter, Facebook, and corporate media right now, there’s zero interest in correcting course any time soon.