Twitter’s Censorship of the New York Post Is Un-American 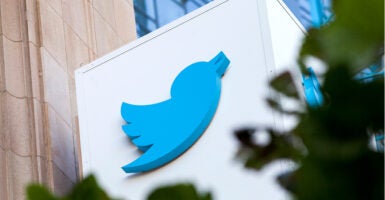 If the press were asked to follow Twitter's evolving standards, there would be no useful journalism on the social media platform. Pictured: Twitter's headquarters in San Francisco. (Photo: Kim Kulish/Corbis via Getty Images)

Less than three weeks from a presidential election, perhaps the most vital platform for political news and debate, Twitter, has locked down the accounts of a presidential candidate’s press secretary and of his official campaign, among others, at the behest of activists pretending to be journalists.

This is unsurprising to anyone who has been paying attention. The press has spent four years pressuring social media outlets to censor speech and limit access with scaremongering over the alleged nefarious influence of foreign accounts, “fake news,” and hate speech—all of which are preferable to authoritarian technocrats shutting down open discourse. Well, at least until such time that people lose their agency and free will.

Of course, as far as we know, the New York Post piece on Hunter Biden‘s shady foreign dealings, in which we learn that Democratic Party presidential candidate Joe Biden may have met with a Burisma executive at the behest of his son, was written using the same journalistic ethics and standards that have been in place for decades.

Even Twitter’s ostensible justification—crafted in conjunction with its media “partners”—for banning the Post story make zero sense. Twitter says it “prohibits the use of our service to distribute content obtained without authorization. We don’t want to incentivize hacking by allowing Twitter to be used as distribution for possibly illegally obtained materials.”

If the press were asked to follow these evolving standards, there would be no useful journalism on Twitter.

Certainly, the vast majority of “Russian collusion” rumormongering that was pumped out by The Washington Post, CNN, and The New York Times would be censored, as it relied heavily on faulty sourcing and foreign disinformation. As would all the uncorroborated rape allegations that were made against Justice Brett Kavanaugh and amplified by virtually every major media organization.

Indeed, if journalists were forbidden from distributing “content obtained without authorization,” the majority of the biggest news stories of the past century would be off limits. President Donald Trump’s tax return story. The Pentagon Papers. Watergate. The Iran-Contra scandal. All the revelations of Edward Snowden or Chelsea Manning. The most vital charge of journalism is to procure information that the powerful hide.

Twitter claims it doesn’t want to incentivize hacking by allowing its platform to be used to distribute possibly “illegally obtained materials.” Yet, when a Daily Caller reporter offered evidence that Hunter Biden’s laptop was obtained by a repair shop legally, Twitter suspended his account as well.

The very notion that the establishment media wouldn’t run with hacked emails from Trump, if they pointed to possible misconduct, strains credulity.

Just a few weeks ago, nearly every reporter on social media was sharing a recording “obtained without authorization” of the first lady complaining about Christmas decorating—a story that had almost no news value.

By the way, as of yet, no one has really disputed the veracity of the Post’s reporting. Hunter Biden has not claimed that those aren’t his pictures or his emails. Joe Biden hasn’t claimed that he didn’t meet Burisma execs who were using his son.

Politico reports that “Biden’s campaign would not rule out the possibility that the former VP had some kind of informal interaction” with the Burisma executive. One assumes that, if the vice president met with a shady oil executive who put his incompetent son on its board, it would not be on the official docket.

In a healthy media environment, journalists wouldn’t be dismissing the story; they would be trying to verify it in the same way they try to verify dirt on the president.

Instead, the Biden campaign uses the Twitter ban as proof of the inauthenticity of the story. “Twitter’s response to the actual article itself makes clear that these purported allegations are false and are not true,” says one creative Biden campaign spokesperson.

Even that fact check—which relies on Twitter’s “partners” at The Washington Post—is simply a lie.

Twitter maintains, for instance, that, “then-Vice President Biden played no role in pressuring Ukraine officials into firing the prosecutor, who also was not investigating the energy firm.”

Biden is on video bragging about pressuring the Ukrainian government to fire Viktor Shokin. Whether the prosecutor was investigating Burisma is still opaque—which is why it’s a good idea to let outlets hash it out. If we relied solely on the establishment press, notorious Bush-era fabulist Dan Rather would still have his old job at CBS.

Of course, it is because the story has news value that it’s being censored. The mounting evidence that Hunter Biden leveraged his name, and perhaps more, to make millions is pretty clear.

I still don’t support removing liability protections for Big Tech for both ideological and practical reasons. At this point, the only way to change things is to build your own outlets and platforms. Yet, marketplace decisions by powerful, cronyistic companies can also be fundamentally authoritarian, and it’s completely reasonable to object to them.