‘Not That I Remember’: Hunter Biden on Dropping Off Incriminating Laptop for Repair 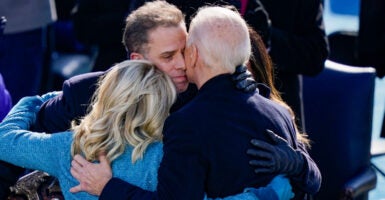 The New York Post quoted emails about Hunter Biden's overseas business dealings, purportedly from his abandoned laptop, a few weeks before the election. Pictured: Hunter Biden hugs his father and stepmother after the president is sworn in Jan. 20 on the West Front of the Capitol. (Photo: Drew Angerer/Getty Images)

Hunter Biden cast doubt during an interview on claims that he dropped off his laptop at a Delaware computer repair shop in 2019, saying he doesn’t remember doing so.

In an interview that aired Sunday on CBS “Sunday Morning,” President Joe Biden’s surviving son suggested that the laptop, contents of which were published weeks before the November presidential election, could have been stolen, hacked, or released by Russian intelligence operatives.

Emails about Hunter Biden’s overseas business dealings, purportedly from the laptop, were published by the New York Post on Oct. 14, a few weeks before the election.

The younger Biden, who is under federal investigation of his business dealings, had not commented publicly since the Post’s reporting first appeared.

“For real, I don’t know,” said Biden, adding that the device “certainly” could be his.

“And you did not drop off a laptop to be repaired in Delaware?” Smith asked.

The owner of a repair shop in Wilmington, Delaware, has said that a man he believed to be Hunter Biden dropped off a laptop for repairs in April 2019.

John Paul Mac Isaac, the shop owner, also said that he turned the device over to the FBI in late 2019 after the owner failed to retrieve it.

Isaac provided a copy of the computer’s hard drive to President Donald Trumps personal lawyer, Rudy Giuliani, who in turn shared the contents with the New York Post.

In the interview, Hunter Biden also addressed the ongoing investigation, saying that he is “100% certain” he will be cleared of any wrongdoing.

Federal prosecutors in Delaware have been investigating Biden’s financial affairs since 2018.

He declined to elaborate on the investigation in the CBS interview, but said he is “cooperating completely” with the probe.

“I’m 100% certain at the end of the investigation, I’ll be cleared of any wrongdoing,” he said.