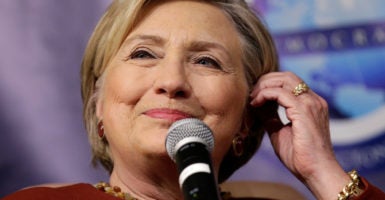 The Justice Department is reviewing whether a special prosecutor is warranted to investigate remaining questions about Hillary Clinton's time at the State Department. Clinton is pictured speaking Nov. 2 at the Woman's National Democratic Club in Washington. (Photo: Joshua Roberts/Reuters /Newscom)

The Justice Department is reviewing whether to name a special counsel to investigate unresolved issues surrounding Hillary Clinton, Attorney General Jeff Sessions told a House panel Tuesday, but turned defensive in explaining why he hasn’t appointed one already.

“What’s it going to take to get a special counsel?” @Jim_Jordan says.

In a later response, Sessions said he currently doesn’t have enough information to name a new independent investigator.

“I would say ‘It looks like’ is not enough basis to appoint a special counsel,” Sessions said.

Republicans on the Judiciary Committee asked Sessions in letters in July and September to name a second special counsel to probe issues involving Clinton, the former secretary of state and Democrats’ 2016 nominee for president, as well as the Obama administration’s Justice Department.

In recent weeks, Republicans have called for a special counsel to look into the so-called Uranium One deal, the Clinton campaign’s funding of the “Trump dossier,” and unanswered questions about the FBI’s investigation of the private email server that Clinton used to conduct government business while running the State Department.

During the hearing, which stretched more than five hours, Rep. Jim Jordan, R-Ohio, said he wanted to know why the Justice Department hasn’t already named a special investigator.

“We sent you a letter three and a half months ago asking for a second special counsel. If you’re now just considering it, what’s it going to take to get a special counsel?” Jordan asked Sessions.

Sessions, a U.S. senator from Alabama before his confirmation as President Donald Trump’s pick for attorney general, was also a U.S. attorney in Alabama and the state’s attorney general.

The Ohio Republican also faulted special counsel Robert Mueller, who is investigating alleged Russian interference in the 2016 presidential campaign. Early on in the Trump administration, Sessions recused himself from probes of the Russia matter because of his role as a campaign adviser.

We know former FBI Director James Comey misled the American people in the summer of 2016 when he called the Clinton email investigation a ‘matter’ [when it was] obviously an investigation. We know FBI Director Comey was drafting an exoneration letter before the investigation was complete. We know Loretta Lynch, one day before the Benghazi report came out, five days before Secretary Clinton was scheduled to be interviewed by the FBI, met with former President Bill Clinton on a tarmac in Phoenix. …

We know that Mr. Comey publicized the [email] investigation, and we know that he made the final decision on whether to prosecute or not. And then, when [Comey] gets fired, he leaks a government document through a friend to The New York Times and what was his goal? To create momentum for [appointing a] special counsel. And, of course, it can’t just be any special counsel. It’s got to be Bob Mueller, his best friend, his predecessor, his mentor. The same Bob Mueller we’ve now learned is involved in this whole investigation with this informant regarding Russian businesses wanting to do uranium business here in the United States regarding the Uranium One deal.

The Uranium One deal is the subject of a probe by the House Permanent Select Committee on Intelligence and the House Oversight and Government Reform Committee. Clinton was a member of a board of federal officials who approved the 2010 deal giving Russia control of 20 percent of America’s uranium, which can be used for nuclear power.

The Hill news organization reported that the FBI was investigating the matter at the time as a potential bribery and kickback scandal, and that Russian nuclear officials routed millions of dollars to benefit the Clinton Foundation, the organization set up by former President Bill Clinton, his wife Hillary, and their daughter Chelsea.

After a back-and-forth with Jordan, Sessions stressed: “It would take a factual basis to meet the standards of a special prosecutor.”

“We will use the proper standards and that’s the only thing I can tell you, Mr. Jordan,” Sessions said. “You can have your idea, but sometimes we have to study what the facts are and to evaluate whether it meets the standard that requires a special counsel.”

Jordan brought up reports that the Clinton campaign and the Democratic National Committee paid to obtain a dossier of embarrassing information about Trump, and also mentioned reports that the FBI paid the dossier’s author, Christopher Steele. Some reports said the dossier led to a judge’s order under the Foreign Intelligence Surveillance Act to allow intelligence officials to spy on Trump campaign associates.

It sure looks like the FBI was paying the author of that document, and it sure looks like a major political party was working with the federal government to then turn an opposition research document that could have been some National Enquirer story into an intelligence document, [and] take that to the FISA court so that they could then get a warrant to spy on Americans associated with the president’s campaign. That’s what it looks like. I’m asking you, doesn’t that warrant, in addition to all the things that we know about James Comey in 2016, doesn’t that warrant naming a second special counsel, as 20 members of this committee wrote you three and a half months ago asking you to do?

This is when Sessions replied, “I would say ‘It looks like’ is not enough basis to appoint a special counsel.”

The Clinton campaign and the Democratic National Committee paid for opposition research on then-candidate Trump by a company called Fusion GPS; Steele, the “Trump dossier” author, worked with Russian operatives to produce embarrassing information on Trump.

Republicans have argued this action by Democrats constitutes more direct evidence of collusion with Russian officials than anything yet known about the Trump campaign.

Later during the hearing, Rep. Andy Biggs, R-Ariz., asked Sessions about his comments to Jordan, and the attorney general sought to clarify that he hadn’t made a decision.

“I want you all to know that if a special counsel is required, I, or I’m sure anyone else in the department that would have the responsibility, would name one. If not, we have to say it’s not required,” Sessions said, adding:

I have no prejudgment. I did not mean to suggest I was taking a side one way or the other on that subject. I was simply responding [that] we would have to have full, effective, detailed, factual evaluation before we make a decision on whether or not a special counsel is required. I have made no prejudgment.

“In a functioning democracy, is it common for the leader of the country to order the criminal justice system to retaliate against his political opponents?” Conyers asked.

Sessions responded: “The Department of Justice can never be used to retaliate politically against opponents, and that would be wrong.”

Conyers: “Should the president of the United States make public comments that might influence a pending criminal investigation?”

Sessions frustrated Democrats when responding to questions about his interaction with figures who are part of Mueller’s probe of suspected collusion between the Trump campaign and the Russians, saying on several occasions that he didn’t recall details.

A former volunteer foreign policy adviser to the Trump campaign, George Papadopoulos, told investigators that he advised Trump in a meeting attended by Sessions to travel to Russia for a meeting with Russian President Vladimir Putin.

Sessions opposed the idea, Papadopoulos told investigators, but at one point told congressional investigators he wasn’t aware of Trump campaign contacts with Russians.

Another foreign policy adviser to the Trump campaign, Carter Page, told the House intelligence committee that he mentioned to Sessions that he traveled to Russia during the 2016 campaign.

Some Democrats accuse the attorney general of misleading Congress, but Sessions said his answers have not changed and that he has always told the truth.

“I would like to address recent news reports regarding meetings during the campaign attended by George Papadopoulos and Carter Page, among others. Frankly, I had no recollection of this until I saw these news reports,” Sessions said, adding:

I do now recall the March 2016 meeting at Trump Hotel that Mr. Papadopoulos attended, but I have no clear recollection of the details of what he said during that meeting. After reading his account, and to the best of my recollection, I believe that I wanted to make clear to him that he was not authorized to represent the campaign with the Russian government, or any other foreign government, for that matter. But I did not recall this event, which occurred 18 months before my testimony of a few weeks ago, and would gladly have reported it. As for Mr. Page, while I do not challenge his recollection, I have no memory of his presence at a dinner at the Capitol Hill Club, or any passing conversation he may have had with me as he left.