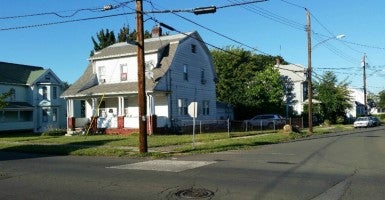 Janet Rodriguez's house on First Avenue in West Haven, Conn., is one of the homes the city is approved the use eminent domain on to make way for a $200 million high-end mall. (Photo: Janet Rodriguez)

Every day, Janet Rodriguez sits at her home in West Haven, Conn., and she waits.

She waits for a knock at her front door, a knock she fears will bring news that Rodriguez and her family will be forced to leave the home they’ve lived in for nearly a decade. A knock that means the city has exhausted its efforts to negotiate with Rodriguez and her family and is moving to condemn their house to make way for a $200-million high-end mall.

Rodriguez, along with her neighbors on First Avenue, is fighting the city of West Haven to keep her home. But still, every day, she waits.

In 2005, a pregnant Rodriguez; her husband, Fernando; and their young son decided to leave New York for West Haven in search of more room for their growing family. The young mother had previously visited relatives who lived in the area, and the Connecticut town appealed to the family as a good place to raise their children.

They fell in love with a house on the east side of First Avenue, and for the last 10 years, it’s what the Rodriguez family have called home.

“Moving is hard for people,” Rodriguez said in an interview with The Daily Signal. “It’s very stressful, and to find another place to live and call your home—your home is memories. We’ve endured so many things in this house. Bad things have happened to us, but this is our house.”

In January, Rodriguez learned that the city and two developers were interested in her property, along with other homes and businesses along First Avenue, after a surveyor knocked on Rodriguez’s door and asked to take measurements of her property.

The city, Rodriguez later found out, was working with a developer to build a $200-million, 425,000-square-foot waterfront project called The Haven, a high-end mall that includes 100 outlet stores and six restaurants.

And Rodriguez’s property sits in the southern corner of the proposed project.

For months, Rodriguez never heard anything from the city regarding what land would be redeveloped for The Haven. Then, in May, a realtor knocked on her door and told Rodriguez the home was included in the redevelopment plan.

“I told the realtor the house wasn’t for sale,” Rodriguez recalled.

“We pay taxes. This is our home,” Rodriguez said. “[Developers] don’t even know West Haven. They just look at the map and say we’re going to make a mall. They don’t even look at the people in the middle.”

50 Miles Down the Road

Under the Fifth Amendment’s Takings Clause, the government can exercise its eminent domain power to take property from private residents if it satisfies two conditions: it’s for public use, and just compensation is provided.

That change occurred in 2005, after Susette Kelo, a mother of five boys, led a years-long battle against the city of New London, Conn., in an effort to save her little pink house.

Officials in New London, located just 50 miles east of West Haven, exercised their eminent domain power to condemn Kelo’s home, along with property belonging to six other families, to make way for a hotel, restaurants, shops, and a renovated marina.

The redevelopment was intended to complement an adjacent Pfizer facility, but after the pharmaceutical giant left New London, the city’s redevelopment plans never panned out. Kelo’s pink house, which became a symbol of the fight, and her neighbors’ homes were demolished, but today, all that sits on the property is an empty field overgrown with weeds.

Kelo’s case against New London went all the way to the U.S. Supreme Court, which ruled in 2005 that the city was well within its rights under the Takings Clause to seize property under eminent domain for the purpose of transferring it to another private entity.

The ruling became one of the most despised in the high court’s history, and it sparked backlash from the public and state legislatures. After the Supreme Court’s decision was handed down in 2005, more than 40 states passed laws limiting the use of eminent domain for transfers of property from one private party to another. In 11 of those states, legislatures passed constitutional amendments.

Connecticut was not one of those states.

“In this situation, we have a town that’s 50 miles down the road from Kelo,” she said. “There’s an example down the street of how using eminent domain for private use can fall apart. All they have to do is see what’s going on there and that it’s a risky move for them. They should allow the property owners to stay.”

Next door to Rodriguez’s home sits property owned by Bob McGinnity, who has lived in West Haven for nearly 50 years.

A lifelong Connecticut resident and retired railroad conductor, McGinnity thought his family “upgraded” when they moved from nearby New Haven to West Haven when he was just a little kid.

Like Rodriguez, McGinnity didn’t know his home on First Avenue was going to be included in the redevelopment plan for The Haven, and like Rodriguez, he doesn’t plan to move.

“They say they’ll use eminent domain as a last resort,” he said in an interview with The Daily Signal. “I don’t know what that means. That means nothing. I don’t care if you say the very last resort; you’re taking my home.”

The developers, two “cowboys from Texas,” McGinnity said, have offered what he calls “fear-market value” for his home. However, he has no plans to accept the developers’ offers.

“What they want to give me compared to what they’re going to make from my property is quite wide of a difference,” he said, “and I also believe if you’re taking my house, you can’t tell me how much you want to give me.” The city council in West Haven, Conn., approved the use of eminent domain for properties in the city. The city plans to build a high-end mall on more than 450,000 acres located along the water. (Photo: Bill Shettle/ZUMA Press/Newscom)

In the two months since the West Haven City Council approved the use of eminent domain for the properties where The Haven will be built, Rodriguez has received several offers from the developer to purchase her home.

However, after paying off the current mortgage on her First Avenue home, Rodriguez said she wouldn’t have enough money to make a down payment on a new home.

“To buy another house wouldn’t be like buying your first house,” she said. “It’s going to be harder to get another mortgage and good interest rate. We don’t want to start from the bottom again. It’s not being greedy. I have two kids. We’ve been here for almost 10 years.”

Rodriguez last heard from the developer on August 29, when the realtor working with the developers left her a voicemail saying they wanted to work with the family and help them get to “yes.” Rodriguez never called the realtor back.

“That’s the end of the conversation,” she said.

According to the city, of the 56 parcels located on the land for The Haven, 48 are currently under contract.

In an email to The Daily Signal, Joe Riccio, the commissioner of Planning and Development for West Haven, said the city will negotiate with property owners if the developer’s negotiations fail.

“It will make West Haven a destination, stimulate other development (it already has), and it will buoy the spirit of its citizens.”

While Rodriguez doesn’t blame the city for wanting good things for West Haven, she doesn’t see why the city has to take her home to accomplish its goals of bringing more revenue and jobs to the city. And she plans on fighting to keep her home.

“[My youngest son] said, ‘Mommy, why are you letting these people take our home?’ I said it’s not up to me. It’s up to the people who have the power and the money,” Rodriguez said. “I want him to see me fighting. I will fight to the end.”

It’s a statement of fact for Rodriguez, one McGinnity echoed.