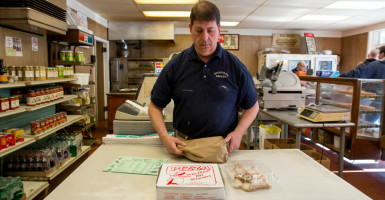 In 2013, the IRS seized more than $68,000 from the Connecticut bakery David Vocatura and his family own. The IRS returned the money, but is still pursuing a tax investigation. (Photo: Institute for Justice)

For nearly 100 years, Vocatura’s Bakery has been a New England staple.

The family business was started in Westerly, Rhode Island, in 1919 and moved to its current home in Norwich, Connecticut, in 1956.

There, the family bakes bread using its six-decade-old industrial oven and serves up pizza—square, but not sicilian—and sandwiches—including one “as long as your forearm”—to members of the community.

The bakery has been family-owned and operated since its opening in 1919, and today, it’s run by David Vocatura, Larry Vocatura, Frankie Vocatura, and Richard Vocatura. The foursome still remembers being pushed around the bakery in a hand truck and crawling into the turned-off oven to ride the baking trays around and around.

Today, David Vocatura and Richard Vocatura are in charge of the front of the bakery, Larry Vocatura bakes, and Frankie Vocatura drives the bakery’s delivery truck.

David Vocatura, who handles the bakery’s finances, told The Daily Signal that in its near 100-year lifespan, Vocatura’s Bakery has always been an honest business, paying its taxes and obeying the law.

But the IRS found reason to disagree.

The agency told The Daily Signal it could not comment on the Vocaturas’ case because it is still pending.

On May 1, 2013, more than eight agents with the tax agency and a U.S. marshal arrived at the bakery, while more agents headed to each of the Vocaturas’ houses. David Vocatura and Larry Vocatura were at the bakery, and the pair were questioned separately, on the bakery’s work floor and in an office, respectively, by the agents.

Agents questioned Frankie Vocatura at his home, but Richard Vocatura was out of town.

The IRS first told David Vocatura that he wouldn’t need a lawyer, he recalled to The Daily Signal, but proceeded to question him for several hours, asking if the bakery owners were selling drugs out of their delivery trucks or if they were running a prostitution ring out of the bakery.

The IRS agents then questioned David Vocatura about his patterns of deposits of less than $10,000 into the bakery’s bank account.

Under federal law, structuring cash deposits or withdrawals to avoid federal reporting requirements is a crime. The Bank Secrecy Act requires banks to report any cash transactions of more than $10,000 to the federal government.

David Vocatura had made cash deposits of under $10,000 into the bakery’s account, but only after a bank employee called the bakery in 2007 to tell them that deposits of more than that amount required them to submit additional paperwork.

“The terminology that they used was never really explained to us in detail,” David Vocatura told The Daily Signal. “We just thought it was an inconvenience or a nuisance for [the bank].”

Regardless of the bank employee’s instructions, the IRS agents told David Vocatura that he had broken the law, which gave the tax agency the authority to empty the bakery’s bank account, containing $68,382.22.

And the IRS did.

“The thing that totally amazed me was the hierarchy of command or whatever it is that allows something like this to happen,” David Vocatura said. “First, the money is taken, and it never hits the courts.” A controversial legal tool known as civil asset forfeiture gives law enforcement the power to seize cash, cars, and property if they suspect it’s tied to a crime.

Furthermore, under a subset of civil forfeiture laws regulating cash deposits, the government can seize cash from those accused of structuring violations, as it did in David Vocatura’s case.

Connecticut, specifically, is the seventh worst state for seizures under structuring laws. From 2005 to 2013, federal prosecutors in Connecticut approved 9.2 seizures for every 10,000 businesses, according to the Institute for Justice.

Civil forfeiture and structuring laws were intended to target drug traffickers, money launderers, and those financing terror activities. However, small business owners like the Vocaturas have recently had money taken by the IRS after the agency alleged they were structuring cash transactions to intentionally skirt reporting requirements.

After a number of high profile cases involving small business owners were documented by the press, the IRS and Justice Department changed their policies regarding structuring in 2014 and 2015, respectively.

Following the government’s action, opponents of civil forfeiture have been encouraging members of Congress to write these policy changes into federal law.

“At a time when Republicans and Democrats can hardly agree on anything, the Justice Department has managed to unite my entire subcommittee—against the Justice Department,” Roskam said in a statement Thursday. “As my colleague, our Ranking Member John Lewis, said during the hearing, on this issue we are on one accord. He’s absolutely right and we will continue to speak with one loud voice to hold the justice system accountable for delivering justice.” Vocatura’s Bakery started in Westerley, Rhode Island, in 1919. In 1956, the family moved the bakery to Norwich, Connecticut, where it’s remained ever since. In 2013, the IRS took more than $60,000 from the bakery’s bank account after it alleged its owners had committed structuring violations. (Photo: Institute for Justice)

For three years, the Vocaturas have been fighting the IRS’ seizure of the bakery’s $68,000.

The federal government has kept the money, but prosecutors never moved to formally forfeit it under civil forfeiture laws over the three-year span.

On Feb. 18, though, the family received notice that the government was moving to take the money not under civil forfeiture, but rather criminal forfeiture.

That same day, Assistant U.S. Attorney Peter Jongbloed with the Justice Department offered both David Vocatura and Larry Vocatura a plea deal if they pleaded guilty to structuring charges and admitted “acceptance of personal responsibility.”

If the Vocaturas took the deal, they could have been subject to the forfeiture of the $68,000 seized from the bakery’s bank account, $160,000 in combined personal assets, and up to four years in prison.

If the Vocaturas decided not to take the deal, Jongbloed told them that structuring, a felony, is punishable by up to five years in prison.

David Vocatura and Larry Vocatura decided not to take the offer.

“Additional fines and prison time if we plead guilty we simply were not going to do,” David Vocatura said. “It was ridiculous the way they came into the bakery, and when they were looking for everything, they didn’t find anything illegal, so we’re going to defend ourselves.”

After rejecting Jongbloed’s deal, David Vocatura expected to move forward with the structuring case. But earlier this month, the Justice Department issued a grand jury subpoena demanding eight years worth of financial records from Vocatura’s Bakery, including bank statements, invoices, and correspondence with the bakery’s customers, beginning Jan. 1, 2008.

“This is retaliation for [the Vocaturas] refusing to accept the plea agreement. That’s exactly what this is,” he told The Daily Signal. “It’s a fishing expedition that’s practically boundless. It goes back eight years, and they’re doing this after three years of holding the bakery’s money.”

“If they really suspected that they were involved in some sort of criminal tax activity, what were they doing for the past three years?” he continued.

David Vocatura is prepared to cooperate with the government’s investigation.

“You have the wrong people,” David Vocatura said. “This is an honest business. We all work hard.”

In a statement to The Daily Signal, the IRS said it was prohibited from discussing David Vocatura’s specific case. The agency did, however, point to its 2014 policy change regarding structuring cases.

“We recognize that there are individuals who may have had their money seized prior to our policy change, and we are working with our partners at the Department of Justice to address those issues,” the IRS said. David Vocatura’s family started Vocatura’s Bakery in 1919. In 2013, the IRS seized more than $60,000 from the bakery through civil asset forfeiture. (Photo: Institute for Justice)

On Wednesday, the House Ways and Means Oversight Subcommittee held a hearing on the IRS’ use of civil forfeiture, which David Vocatura attended with Alban.

As David Vocatura was travelling from Connecticut to Washington, D.C., he received word from the federal government that the $68,000 the IRS took from Vocatura’s Bakery was going to be returned.

The news came just hours after the Institute for Justice filed a lawsuit against the government on behalf of David Vocatura calling on the IRS to return the money.

The government is continuing to move forward with its investigation into the bakery, though.

“It’s just harassment,” Alban said. “It’s harassment and retaliation for refusing to accept the plea deal. But this is becoming increasingly common for prosecutors to keep trying to pressure them with a plea deal to give up the money and pay additional fines, and when that doesn’t work, it’s, ‘OK, we’ll open your books and go into eight years worth of your taxes and try to find something wrong.’”

David Vocatura contends that he’s happy his family’s bakery is getting its $68,000 back, but he knows that the battle is far from over.

“It’s just crazy periods of stress and not knowing what the future will be,” he said. “Constantly every time we would talk to the lawyer, it was like, more fines, possibly going to prison, and just having that over your head, it’s just crazy.”