‘Too Big to Fail’ Has Been Damaging for America. This Bill Would Finally End It. 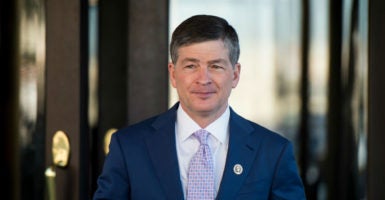 Rep. Jeb Hensarling, chairman of the House Financial Services Committee, has led the long effort to draft the Financial CHOICE Act and advance it to the House floor. (Photo: Bill Clark/CQ Roll Call/Newscom)

It has been a long time coming for the Financial CHOICE Act.

This bill, which will pass the House on Thursday, is the culmination of an idea that has germinated across the country since the disastrous market crash of the late 2000s and the subsequent bailouts, overreaching, and misguided federal legislation.

That idea is simple: Big institutions that fail must be allowed to fail. Government’s responsibility is very simply to create an environment where failure can occur—and when it does, it can create a freer and fairer marketplace.

The only way to end “too big to fail” is to ensure that institutions that are too big can fail.

After the 2008 crash, Washington did what it does best. It responded by propping up failing institutions and throwing more money at the problem, clearly exacerbating the economic conditions that led to the crash in the first place.

The Dodd-Frank bill, passed in response to the crash, doubled down on stupid. As our colleague at The Heritage Foundation, Norbert Michel, wrote:

The 2010 Dodd-Frank Wall Street Reform and Consumer Protection Act is among the most inappropriately named laws ever enacted in the U.S. It neither reformed Wall Street nor protected consumers, and it imposed massive new regulations on banks far away from Wall Street.

In other words, by focusing on enshrining “too big to fail” into law with a massive federal regulatory scheme, the bill strangled smaller community banks who are closest to the people they lend to.

This reaction follows the all too familiar pattern of Washington consolidating decision-making power at the federal level rather than disbursing it locally across the country.

The results have been predictable.

As Heritage Action for America has noted, Dodd-Frank “runs local community banks out of business, restricts access to credit for investors and homebuyers, raises lending costs, and reduces access to capital for small businesses. It also created one of the most powerful and unaccountable federal agencies—the Consumer Financial Protection Bureau (CFPB).”

The CHOICE Act ends this by insisting on the use of a bankruptcy process for big financial institutions that fail, while fundamentally reforming the Consumer Financial Protection Bureau.

The result will be significant economic improvements for the country and a financial market that discourages big institutions from engaging in risky and irresponsible behavior that leads to volatile market conditions, which threaten everybody.

For those who have been paying attention to dysfunction in Washington, it is fair to wonder how in the world a bill like this—one that tackles significant policy problems on a controversial subject in a serious way—has made it to the House floor for a vote with relatively little drama.

After all, the health care bill considered in the House took months of effort and lots of pain before finally getting a vote, while the House tax reform proposal is experiencing similar problems.

That doesn’t even cover the challenges House Republicans face in the appropriations process and the upcoming debt limit debate.

The answer has a lot to do with the bill’s champion, Rep. Jeb Hensarling, chairman of the House Financial Services Committee. He has been diligently working on the legislation for years, despite being repeatedly told that his conference had no desire to vote on the bill.

Like the Little Engine that Could, Hensarling has steadily plodded along with full confidence that the conference would come in his direction when the bill was finally ready for primetime.

Hensarling’s confidence wasn’t misplaced. In addition to working his committee and the broader conference, Hensarling worked with outside groups and grassroots activists across the country.

He built a consensus because he understood that this was an issue that in no small part created the tea party movement that launched Republicans into power in 2010.

Inherent in that movement was a deep distrust of Washington central planning, a healthy suspicion of institutions that have grown so big that they no longer have human contact with the people they serve, and a web of cronyism and corruption that props up and exacerbates the problems.

Hensarling’s Financial CHOICE Act is the ultimate example of how Washington can improve the way it does business.

The bill is the product of listening to the concerns of the American people, understanding those concerns and the ways Washington has failed, and then acting in such a way as to address them without consolidating power in Washington.

Some observers have suggested that the bill will never be considered in the Senate. While it is certainly true that the Senate will be a tougher test for the CHOICE Act, its prospects for passage should not be written off.

Big ideas have a way of sticking around, and while the Senate is certainly more insulated to the voice of the people than the House, it still ultimately answers to the voters.