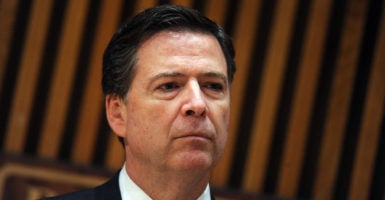 “Ethical leaders lead by seeing above the short term, above the urgent or the partisan, and with a higher loyalty to lasting values, most importantly to the truth,” former FBI Director James Comey says.

Former FBI Director James Comey will begin teaching an ethical leadership course at the College of William & Mary in the fall, the school announced Friday.

Comey, who was fired from his position as head of the FBI in May 2017, accepted a nontenured position as an executive professor in education, according to The Washington Post. The course will be offered through the Williamsburg, Virginia-based William & Mary Washington Center in the fall 2018, spring 2019, and summer 2019 semesters.

“I am thrilled to have the chance to engage with William & Mary students about a vital topic—ethical leadership,” Comey said in a statement. “Ethical leaders lead by seeing above the short term, above the urgent or the partisan, and with a higher loyalty to lasting values, most importantly to the truth.”

“Building and maintaining that kind of leadership, in both the private sector and government, is the challenge of our time,” Comey said. “There is no better place to teach and learn about it than the W&M Washington Program.”

President Donald Trump fired Comey in response to his handling of the investigation into former Secretary of State Hillary Clinton’s mishandling of classified information, saying he “lost the confidence of almost everyone in Washington, Republican and Democrat alike.”

Undergraduates in William & Mary Washington Center’s program and graduate students in the Educational Policy, Planning and Leadership program will be granted priority enrollment. Comey has strong ties to the school. He received a bachelor’s degree in 1982, double majoring in chemistry and religion, and received an honorary law degree in 2008.

“Jim Comey is among William & Mary’s most distinguished alumni,” William & Mary President Taylor Reveley said in a statement. “Over the years, he has been deeply committed to his alma mater. He understands to the core of his being that our leaders must have an abiding commitment to ethical behavior and sacrificial service if we are to have good government.”

After his dismissal, Comey wrote a book detailing “his never-before-told experiences from some of the highest-stakes situations of his career, ” according to the Amazon description. The book, titled “A Higher Loyalty: Truth, Lies, and Leadership,” will go on sale May 1.