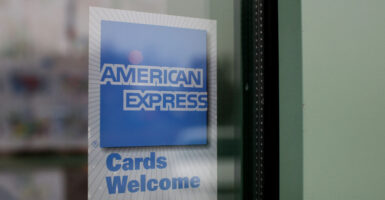 Instead of fostering an environment where employees are hired and promoted based on merit, Color Us United alleges, American Express is making a concerted effort to implement “woke racial preferences.” Pictured: A sign in a restaurant window in Des Plaines, Illinois, welcomes American Express cardholders. (Photo: Justin Sullivan/Getty Images)

Look for a “Colleague Network” at American Express that supports whites, particularly white males, and that search will be in vain because the multinational credit card corporation has embraced discriminatory policies, according to a nonprofit group that advocates “a unified America.”

American Express lists 14 Colleague Networks in its 2021 Inaugural Diversity, Equity, and Inclusion Report, put together as part of a $1 billion action plan unfurled by the corporation more than a year ago.

Examples include the Black Engagement Network, the PEACE Muslim Network, the Hispanic Origin, the Latin American Network, and the PRIDE+ Network.

American Express crafted its “action plan” to “promote racial, ethnic and gender equity for colleagues, customers and communities,” according to a corporate press release in October 2020.

But instead of fostering an environment where employees are hired and promoted based on merit, regardless of race, ethnicity, and gender, says Kenny Xu, president of Color Us United, American Express is making a concerted effort to implement “woke racial preferences.”

The nonprofit Color Us United, which advocates “colorblind” principles, has started a new social media campaign highlighting key parts of American Express’ 2021 report. The group is circulating a petition challenging corporate policies its members view as “harmful,” “divisive,” and “un-American.”

“A sterling example of American capitalism is being ripped apart by a woke doctrine,” the Color Us United petition declares in its opening paragraph. “As believers in the American Experiment, we can NOT allow this injustice to stand.”

Color Us United hopes to obtain 10,000 signatures for its petition to American Express, and has attracted almost 7,000 so far.

The petition cites examples of “egregious policies” rooted in critical race theory and “preferential contracts” that Color Us United argues are “possibly unconstitutional and illegal.”

Among those examples, the group says that American Express:

—Ties executive bonuses to racial “equity,” incentivizing managers to hire minorities even if they are less qualified than other job candidates.

—Provides training in critical race theory, teaching staff that “capitalism is racist” and asking workers to rank themselves on a hierarchy of “privilege.”

Color Us United, which filed for nonprofit status with the IRS in May 2020, has three full-time staffers. Its 16 team members include Michael Gonzalez, a senior fellow with The Heritage Foundation, parent organization of The Daily Signal; Christopher Rufo, senior fellow at Manhattan Institute and director of its initiative on critical race theory; and businessman Ward Connerly, founder of the Equal Rights for All PAC.

“We are calling them Un-American Express,” Xu, a former Heritage intern who contributes commentary to The Daily Signal, said in an interview. “They are investing $1 billion in these un-American policies. We want them to reverse their race-based hiring and promotion practices and their diversity, equity, and inclusion training. This kind of training doesn’t help anyone, and what American Express is doing only increases racial resentment.”

At American Express, at least 2 of every 5 employees are involved in at least one “Colleague Network,” according to the corporation’s 2021 report. No network is listed for white or male employees.

Under a section of  its Inaugural Diversity, Equity, and Inclusion Report labeled “Recruitment,” American Express emphasizes its commitment to drawing from “diverse backgrounds worldwide” with an eye toward hiring women, “those with different racial and ethnic backgrounds,” and “LBGTQ+” individuals.

On page 18 of the diversity report, the corporation commits to increasing the number of  U.S. participants in the American Express Leadership Academy who are “people of color” or from “underrepresented groups” from 50% in 2019 to 75% by the end of 2024.

The diversity report also highlights the crucial role played by the American Express Office of Enterprise Inclusion, Diversity & Business Engagement and its efforts to “combat systemic racism and promote equity and advancement” through various “community initiatives and charitable priorities.”

Another “key pillar” of the office, the report says, is represented by efforts to “build brand relevance and brand affinity” for American Express with “Black, Latinx, Asian, LGBTQ+ and other underrepresented communities, customers, and colleagues.”

Color Us United’s Xu said he sees an attempt to “inculcate a particular political narrative onto employees” that isn’t in employees’ best interests.

Going forward, he told The Daily Signal, American Express should “commit to true meritocratic standards” that are more consistent, in his view, with American values.

“If you really want to improve diversity and opportunity and focus on underprivileged people, then committing to high standards is the way to go,” Xu said. “Don’t lower standards for certain populations and don’t censor people for trying to give negative feedback to [job] candidates that could be helpful. Instead, commit to training for people who are just below the threshold.”

At least one former employee is pushing back against AmEx’s diversity, equity, and inclusion policies, Heritage’s Gonzalez wrote last year.

Former client manager Brian Netzel, alleges in a formal lawsuit that American Express fired him in line with new hiring and promotion efforts emphasizing the racial composition of the corporation’s executive body.

“In October 2020, I was fired from the only company I had ever worked for in a decade because I wasn’t the right race,” Netzel says in a short video about his case. “Yes, I am white.”

Heritage’s Gonzalez told The Daily Signal that American Express engages in hypocritical practices that should be exposed to the public.

“I agree with what Kenny Xu is trying to do in stopping American Express’ woke crusade,” Gonzalez said in an email, adding:

We need to hold these wealthy corporations to account. American Express makes billions from the capitalist system and its identification with the word American. For it to embrace a discipline that is both anti-capitalist and anti-American is the height of hypocrisy.

In a commentary for Fox Business last fall, Gonzalez wrote about American Express, its embrace of critical race theory, and the legal dispute between the corporation and Netzel.

Critical race theory is built around the idea that America is “systemically racist” and that government intervention and reeducation are needed to remake American society, Gonzalez and Heritage colleague Jonathan Butcher wrote in a December 2020 paper.

The Daily Signal sought comment from American Express on the allegations in the Color Us United petition and in Netzel’s complaint, as well as on whether the corporation deliberately excluded white males from its Colleague Networks.

American Express had not responded by publication time.

The petition from Color Us United includes several corporate documents highlighting American Express’ commitment to “environmental, social, and governance” initiatives (also known as ESG), and examples of what the corporation identifies as “microaggressions” that should be eradicated from the workplace.

As for critical race theory, Xu points to a streaming session on Sept. 24, 2020, in which Khalil Muhammad, great-grandson of early Nation of Islam leader Elijah Muhammad, lectures American Express employees about the “systemic evils” of capitalism.

“These kinds of activities are happening in Fortune 500 companies throughout the country,” Xu said. “But it appears American Express is leading the way.”

The problem also isn’t limited to American Express, Xu said, because the credit card corporation partners with various restaurants and hotels to offer perks to its customers.

“They are doubling their spending to contract with minority-owned businesses, and they are trying to include certain racial categories,” he said. “What this means in a concrete sense is that if you are white, you are suddenly less eligible.”